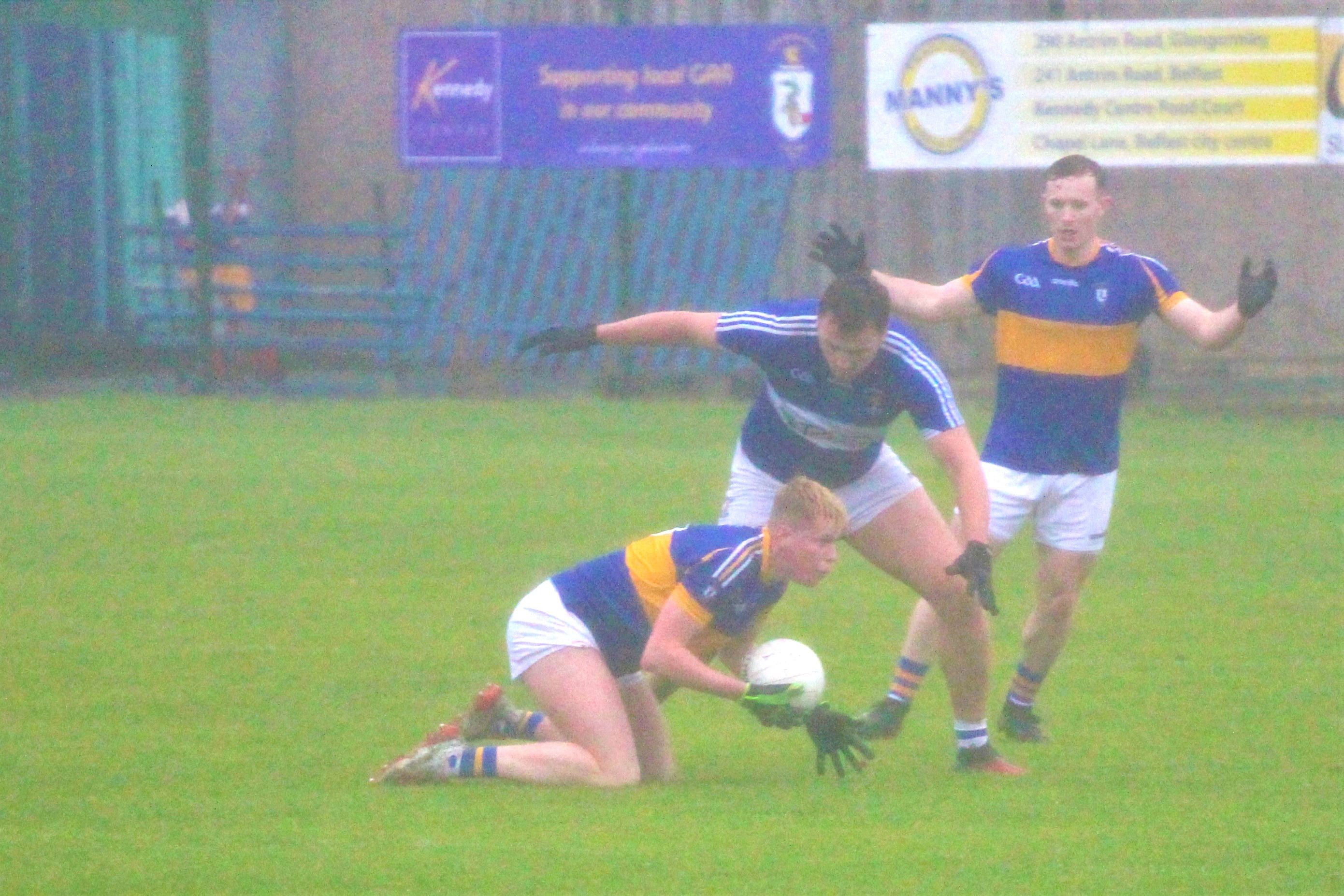 Cormac McGettigan looks for a pass as Domhnall Nugent challenges

ROSSA fought back from seven points down early in the second period to snatch a draw against St John's on a wet and gloomy night that keeps their hopes of a quarter-final in the Antrim Senior Football Championship on course.

The teams played out a draw in the corresponding fixture three weeks ago but at half-time it appeared the Johnnies were well on course for victory they led by two Matthew Fitzpatrick goals.

The former county star was virtually unplayable in the opening period, having a hand in most of the Johnnies' goals to add to his majors, but Rossa managed to seal the gaps and win much more ball that came at them in the second period as they began to dominate the breaks and chipped away at the lead to draw level and then nudge in front, with the visitors finding a late equaliser.

However, the draw was a much better result for Rossa who still have a trip to the Lámh Dhearg to come next week with anything better than a 10-point defeat enough to see them set up a meeting with Cargin in the last eight.

It was an even enough start at Rossa Park but the hosts, with the driving rain at their backs in the opening period, had an early goal chance when Gerard Walsh was slipped in but drove his shot wide.

The opening score came for the Johnnies when Ryan McNulty, moments after Rossa's Cormac McGettigan was black carded for a trip on Fitzptrick and sin-binned for 10 minutes.

Dominic McEnhill responded at the other end, but the Johnnies were much sharper and were dominating the play in horrible conditions as Patrick McBride kicked a free and on eight minutes they struck for the first goal when Domhnall Nugent took a mark, released Fitzpatrick who ran in on goal and whilst his first shot was saved, he followed into score.

Domhnall Nugent thumped over three scores in-a-row with Fitzpatrick involved in the build-up as the visitors threatened to run away with this one, leading 1-5 to 0-1, but the hosts settled with Sean Pat Donnelly kicking a free and Thomas Morgan landing from range.

However, they were to be rocked further on 27 minutes when Jack Bohill broke up a Rossa attack, hacked upfield and Fitzpatrick showed great strength to get clear, play a one-two with Nugent and thump to the net.

Rossa recovered with points from McGettigan and Michael Armstrong in stoppage time, but they were 2-5 to 0-5 behind at the break.

St John's extended their lead seconds after the restart with Michael Bradley firing over, but Rossa began to take a grip on this game and by the water-break were within three thanks to a pointed free from Colm Fleming, a fine effort from Thomas Morgan and a pair of Sean Pat Donnelly frees.

The Johnnies were making little headway in attack by this stage although Domhnall Nugent did find himself in but screwed his shot wide.

Rossa now believed and they got their break on 53 minutes when a Donnelly free came back off the upright, fell kindly to Richard Gowdy who crashed the ball to the net to level.

Another Donnelly free gave Rossa the lead, but just into stoppage time, Michael Bradley levelled for his and his team's second score of the second half.

Try as they might, the Johnnies couldn't find the winner they desperately needed as the game finished in a draw, leaving both teams tied on two points with Rossa having a trip to the already qualified Lámh Dhearg to come next week.