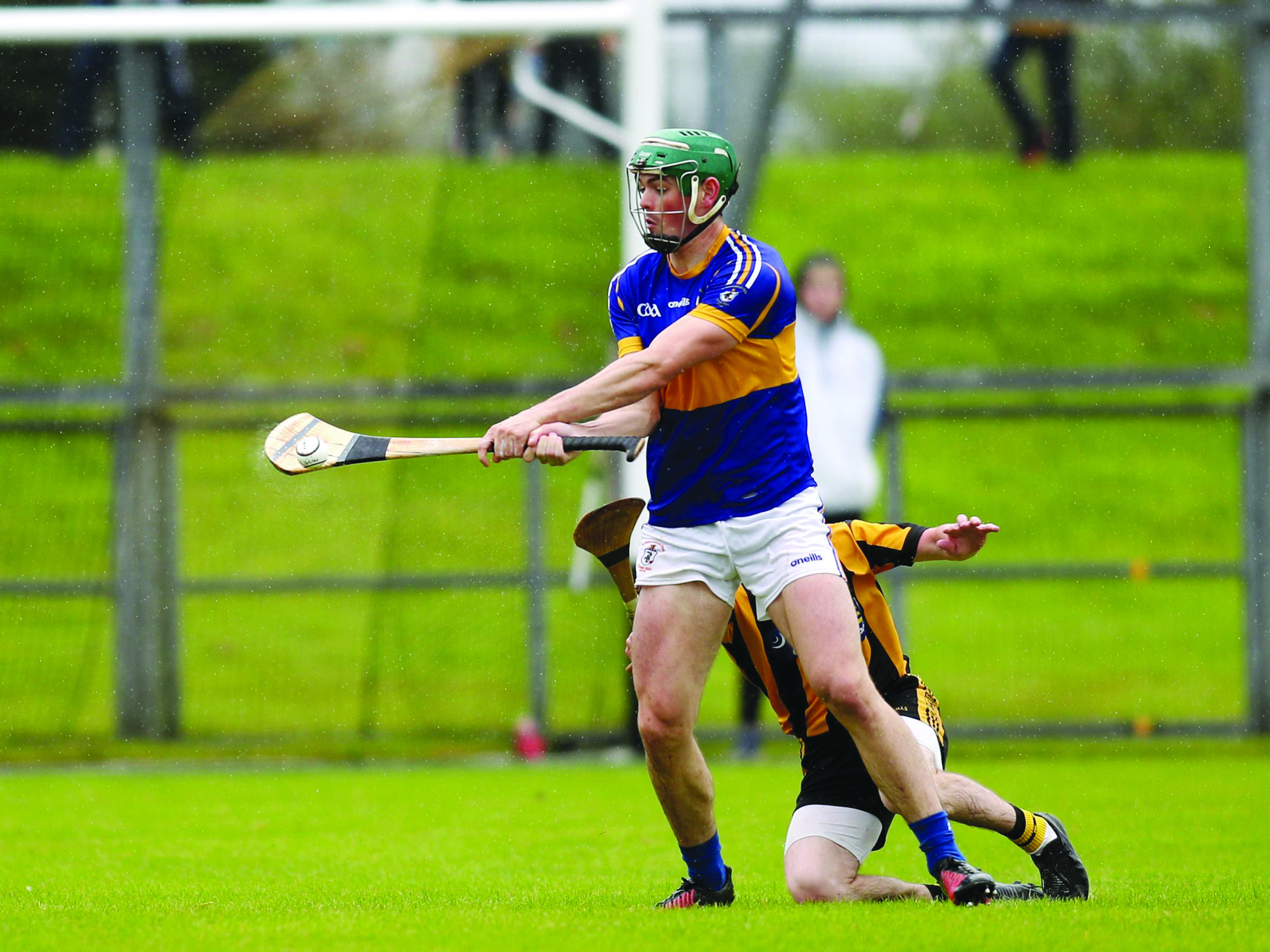 Gerard Walsh, pictured in action for Rossa's hurlers against Ballycastle last weekend, is one of a number of dual players who face a testing schedule over the next week as the Shaws Road side seek to progress in both Hurling and Football Championships

HAVING scored the win their performances warranted throughout Group One in the Antrim Senior Hurling Championship, Rossa's reward is a meeting with 2018 champions Cushendall on Saturday at St Enda’s on the Hightown Road.

Colly Murphy's side found the golden touch in attack against Ballycastle on Sunday to book their place in the quarter-final and will come up against a Ruairi Og side that ended their aspirations at effectively the same stage last year.

That game may have been a round robin fixture, but it was winner-take-all for a semi-final spot and it is the same again this weekend.

There has been a different look to Rossa this year who have delivered consistently strong performances that weren’t reflected in the results, but it took a late rally for St John’s to get the better of them with he last poc of the ball in the opener, before Dunloy somehow salvaged a draw they barely deserved the following week.

Those in blue and gold may have travelled to Ballycastle at the weekend with some trepidation given Lady Luck had deserted them up to that point, but the stars aligned for the Jeremiah's at the weekend and they will go into Saturday's game full of confidence.

Of course, Cushendall will be almost everybody's pick to advance and they finished runners-up in Group Two thanks to convincing wins over Naomh Éanna and then St Gall's last weekend having been denied a draw in their opener against Loughgiel when a penalty came back off the post in stoppage time.

Neil McManus made his return to actin at the weekend as Cushendall look to step it up a gear as we are now in the do-or-die phase of Antrim hurling's premier competition.

The return of Shane McNaughton and Conor Carson from working abroad has bolstered their options, with Alex Delargy and Aidan McNaughton supplementing the their consistent performers over the years in Eoghan Campbell, Paddy and Martin Burke, Ryan McCambridge and Arron Graffin.

However, Rossa will be quietly confident they too have finally found the winning formula and manager Colly Murphy says his players will relish the challenge.

“Cushendall will be red-hot favourites and we'll be playing the underdog as usual, but it’s another week of hurling for us,” he said after Sunday's win in Ballycastle.

“They have nothing to lose as we’re in bonus territory now. Nobody expected us to be hurling in the shape and form we're in.

“People said it would be a toss of a coin between us and Ballycastle, but then we could be siting with six points (on top of the group) but are here with three and came third in the group when we could have been winners.”

There was perhaps a little inexperience in the earlier games as Rossa couldn't see games out from winning positions, but their strong finish on Sunday when they cleverly broke forward to add scores when Ballycastle were throwing the proverbial kitchen sink at them is cause for optimism.

They will know that one lapse in concentration could spell curtains and certainly, Cushendall is not a team that throws in the towel and will be a live threat right until the final whistle.

“Last week against Dunloy, our fourth quarter was very good and we were on top,” Murphy countered.

“It was just the 15 minutes of injury-time that killed us, but we knew the fitness is there.

“The football is standing us in good stead, but it can also come back to bite with injuries so again, we came through this with no injuries.

“We’re not getting an ideal week of preparation but it is what it is - we're just delighted to get through.”

Those dual commitments do make it a fine balancing act with Rossa's footballers facing Cargin on Tuesday night at Ahoghill (6.45pm) after qualifying for the quarter-finals thanks to their mid-week win over Lámh Dhearg.

However, the hectic schedule points to a revival in fortunes across the board for the Shaws Road outfit and that in itself is a good position to be in.

Being competitive against the top teams in the county can only breed confidence amongst a group of players who have been relentless in their approach to each game and Murphy believes that can serve them well against Cushendall on Saturday evening.

“We probably took more from the Dunloy game as I thought, to a man, we were fantastic,” he reflected.

“The St John’s game, I was disappointed with the fact we lost but the performance was great and I think that gave us belief, but against Dunloy we raised it.

“We maybe didn’t reach that level today - we were close at times - but I thought the Dunloy performance was one we could build on.

“The conditions didn't help today (Sunday) but we are there.

“We'll celebrate that we’re hurling for another week and go again on Wednesday (tonight) with the football and back to the hurling after.”