Rossa set for round two against Dunloy 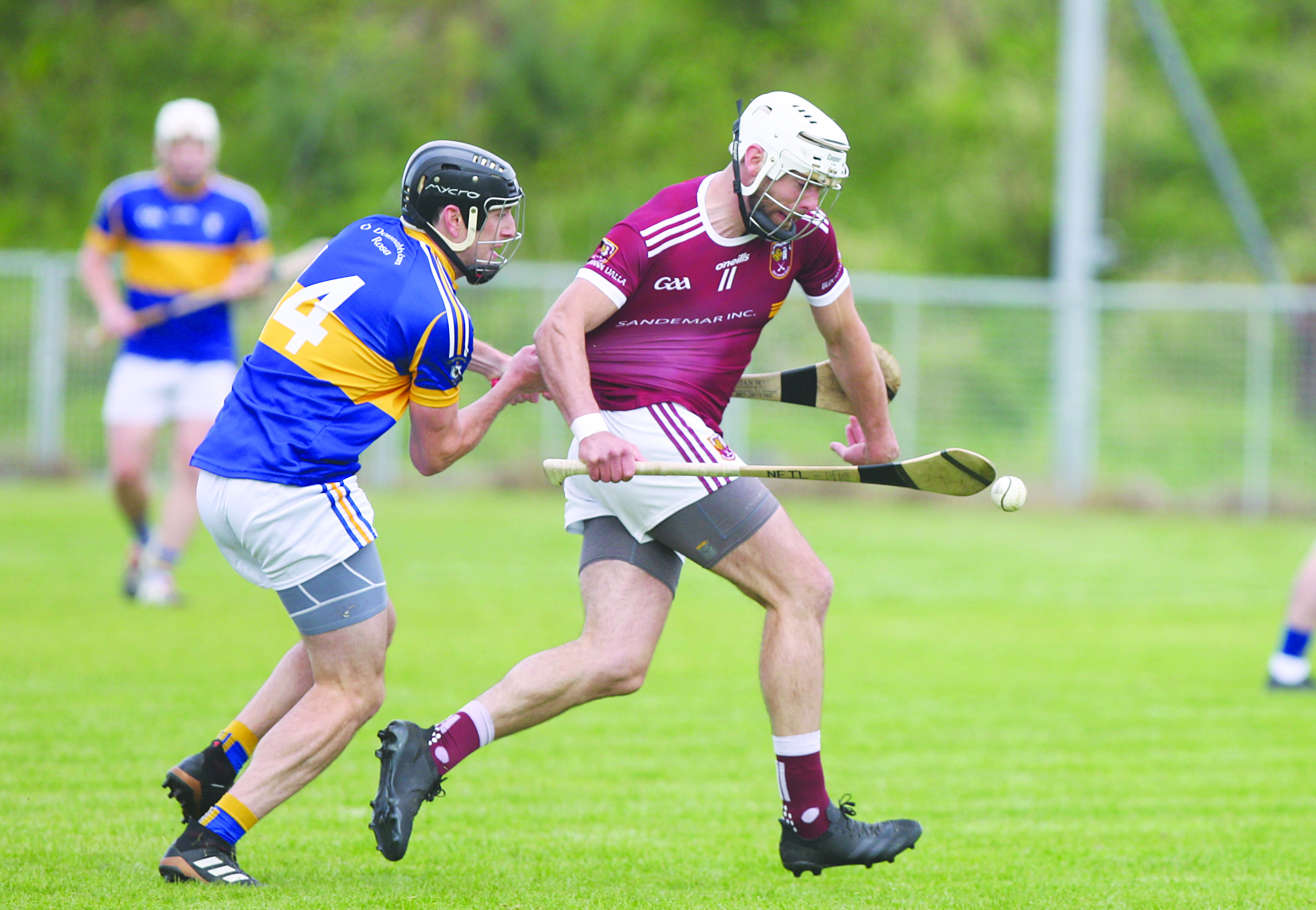 Michael Armstrong, pictured in action against Neil McManus on Saturday, is a major injury concern for Rossa ahead of Sunday’s semi-final against Dunloy


THERE has been no time for Rossa’s hurlers to bask in their quarter-final victory over Cushendall at the weekend as they get set to go straight into a semi-final against defending champions Dunloy on Sunday.

The sides have met recently, of course - that draw at Rossa Park in the group stages when a late, extremely late, rally saw Dunloy hit 1-2 when the clock was in double digits of stoppage time to pilfer a draw.

It would be fair to say the Cuchullains are forewarned, but then if Rossa’s players had any doubts they could mix it with the champions, they were proved to be unfounded given their level of performance just over a fortnight ago.

It’s true, Dunloy seemed to click into gear against St John’s in their last outing that saw them finish top of Group One and receive a bye into Sunday’s last four encounter, whilst the majority of Rossa’s players have not only had a quarter-final to play, but a number of football games including Tuesday’s quarter-final  defeat to Cargin so there has been no let-up for a group of players who have somehow found the energy to fight on all fronts and reach the business end in both competitions.

That has come at a cost, with injuries beginning to accumulate as Michael Armstrong’s hamstring looks likely to keep him out of Sunday’s clash and his loss will be keenly felt given his performances throughout.

Rossa manager Colly Murphy acknowledges his charges will face an entirely different Dunloy than they won they drew with last month and whilst his players will have absolutely no fear, they know they won’t be many people’s pick to reach the final.

“When we play Dunloy I don’t know who we’ll have left - I may get a game,” he joked after Saturday’s quarter-final.

“Dunloy are overwhelming favourites and I’ve said it from the start, they are a class act.
“We gave it what-for up at out pitch but this will be a completely different game again. They’ll be overwhelming favourites and we’ll be 5/1, which is understandable and I think they are the proper odds. At the same time, we are in with a puncher’s chance. Our lads fear nobody and are enjoying their hurling.

“They won’t play like they played against us the last day. They’ll be a lot more fluid and they’ll know our team a lot more. Anybody who has watched Dunloy over the last lot of years will know their players, but they maybe didn’t know ours and we caught them on the hop a bit.”


Some outside of Rossa Park have been stunned by Rossa’s resurgence in this year’s Championship having been away from the semi-final stage for 15 years.

The young players who won titles at minor level have now begun to blossom into seniors and along with some experienced heads, they have found the right blend, but the Rossa boss points to another element that has led to their consistently top performances.

“I was never a great trainer myself but you have to want to go training as you can’t just turn up on match day. Everybody wants to be number one but not everybody is prepared to put the work in to be number one.

“They (players) are now and they are changing things to go training so it’s a completely different mindset this year and you can see they and the supporters are having. It’s just been great for the club.”

With inter-county action not set to resume until the middle of next month, the spotlight has shone even brighter on the club scene and Antrim’s Senior Hurling Championship has delivered a magnificent series of games to date.

The race for the Volunteer Cup is always a little special and the secret now seems to be out with it becoming the talk of the country in recent weeks. Rossa’s exploits have been one of the stories, but Murphy has consistently said that whilst the format is ideal, the rushed nature is one that bugs him and can’t understand why it couldn’t have been extended out a little longer to give dual players adequate recovery time.

“They are going to the well again and I know I’m like a broken record, but those boys are out on their feet and they have to play Cargin on Tuesday night (football) and then Dunloy next week. There’s just no need for that,” he added.

“Sport is about enjoyment and you want to go and enjoy your win, your first senior semi-final since 2005, but in the back of their minds they are already thinking about Tuesday night and then again about next Sunday.

“Why not push it back a few weeks and allow them to enjoy this? There will be more then two of them on the county panel, as they should be, so they are going to be going in hitting the ground running and won’t need much preparation as the fitness is there, the matchplay is there, so I’m a bit disgusted with the whole thing.

“Not one manager I have spoken to has said this Championship needs to be played off in the way it is. The format is fantastic and I applaud that, but the timescale is absolutely ridiculous.”

It has been a hectic schedule and Murphy will be hoping his players have something left when they will need to raise it again against Dunloy on Sunday.
A repeat of their performance in the drawn game is the bare minimum if they want to go a step further and keep their remarkable campaign going all the way to the final.