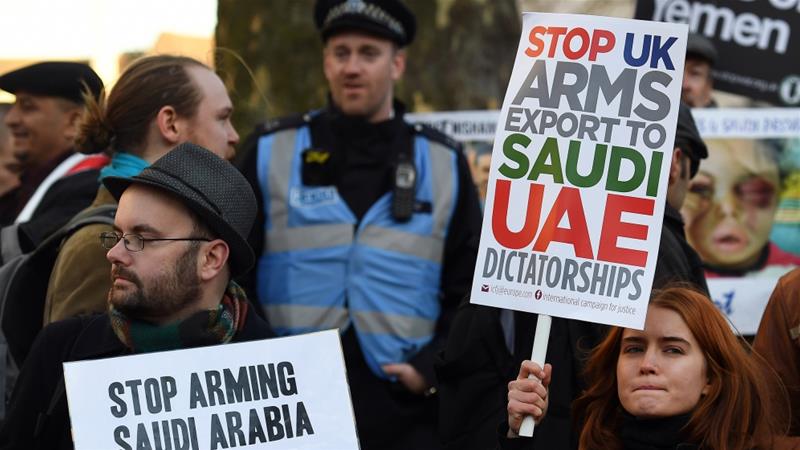 PROTEST: The UK is deeply involved in the war in Yemen

LAST month the British government resumed the sale of weapons to Saudi Arabia. British bombs, bullets, missiles and military equipment sold to the Saudi’s and their allies have caused thousands of deaths and injuries and contributed to a humanitarian disaster in the Yemen.

The images emerging out of that conflict are gut wrenching. Hardly a day passes without new horrifying film and photographic evidence of starving, sick, distressed children. Many are several years older than their small size suggests. They are the victims of a six-year-old war in which tens of thousands have been killed. Appeals for money and aid by the United Nations and aid agencies are growing increasingly desperate as international funding dries up.

The United Nations humanitarian affairs chief Mark Lowcock recently warned the UN Security Council that funding for aid operations in Yemen is “frankly on the verge of collapse.” So far less than one fifth of the money required for 2020 has been donated. Lowcock said: “Without more funding, we should all expect large increases in hunger, malnutrition, cholera, COVID-19 and, above all, death.” It has already closed or reduced 75 per cent of its aid programmes in Yemen. The UN fears for the lives of the 2.4 million children impacted by this crisis, many of whom are already suffering from medical problems brought on by lack of food, including diarrhoea and dehydration. There are also an estimated three million displaced people living in camps.

Currently 80 per cent of Yemen’s population, approximately 24 million people, relies on assistance. This crisis escalates each day because of the additional affects of Covid-19 restrictions, which has disrupted supplies and forced many businesses to close. Attacks by locusts on crops are adding to this catastrophe.

According to one report published last month; “Almost 100 civilians were killed or injured every week in 2018, and the toll on innocent families is only becoming more severe as escalation in violence has led to increased displacement and death. People are struggling to survive, severe outbreaks of COVID-19, cholera and other communicable diseases are ongoing, and the risk of famine looms.”

The civil war in Yemen began in 2014. Iran supports the Houthi rebels in the north of the country. Saudi Arabia and its Gulf allies support the Yemeni government. In March 2015 the Saudis commenced an intensive aerial bombing campaign which it is estimated has involved over twenty thousand aerial attacks, many on civilian targets and farms. Thousands of civilians, mainly women and children have been killed. In one horrific attack in August 2018, which garnered international coverage and outrage, a school bus was destroyed killing forty children and injuring many more. Later photos showed children helping to prepare the graves of their classmates.

“This deal was always a blatant attempt by the government of Saudi Arabia to try to sportswash its abysmal human rights record." said Peter Frankental, Amnesty International

The Saudi government has also imposed a blockade which is making it impossible for the Yemeni economy to function. A report by one human rights agency revealed that the Saudi navy received training in managing the blockade, which the UN has described as unlawful, from the British Navy.

British complicity in what is being described as the world’s worst humanitarian disaster does not end there. Last year the British Court of Appeal ruled that the decision by the London government to licence exports of weapons and military equipment to Saudi Arabia was unlawful. Its decision was based on evidence that the British government had not given due consideration to whether Saudi actions in Yemen were breaches of international humanitarian law.

The United Nations, aid organisations and NGOs recorded hundreds of serious violations by Saudi forces. Amnesty International has documented over 40 airstrikes by Saudi forces which it believes could constitute war crimes. The Judges found that the sale of arms for use in the Yemen was consequently “irrational and therefore unlawful”. The British government suspended its arms shipments to Saudi Arabia.

However, for British arms manufactures and the government it was far from ‘illogical’. In the four years since 2015 British firms sold £6.4 billion in military equipment and weapons to Saudi Arabia and its allies.

So it came as no surprise that last month the Johnson government decided to resume selling armaments to Saudi Arabia. Liz Truss the Minister responsible for international trade announced on 7 July that the government had finished a review into how export licences are granted. She claimed that while there were “credible incidents of concern” that had been classified as “possible” breaches of international humanitarian law (IHL), the British government were treating these as “isolated incidents”.

Human Rights agencies were outraged. Amnesty International described the British decision as “deeply cynical”. It said: “How the Government can seriously describe a five-year Saudi-led aerial assault on Yemen which has seen numerous examples of civilians killed in schools, hospitals, funeral halls and market places as a set of ‘isolated incidents’ is almost beyond comprehension”.

But British hypocrisy was not yet finished. The previous day the Brits announced in a blaze of self-congratulatory pomposity that they were introducing a new so-called ‘groundbreaking global human rights regime’. Their Foreign Minister Dominic Rabb gave himself a pat on the back and said that: “This is a demonstration of Global Britain’s commitment to acting as a force for good in the world.”

The reality is that this new rights regime does not target governments – the principal actors in most conflicts, including that in the Yemen. Instead it will target 49 individuals and organisations it accuses of gross human rights violations in respect of three human rights. Firstly, an individual’s right to life. Secondly, the right “not to be subjected to torture or cruel, inhuman and degrading treatment or punishment”; or the “right to be free from slavery, not to be held in servitude or required to perform forced or compulsory labour.”

I wonder if those thousands of bereaved families in Yemen, starving and terrorised by British weapons - wondering where the next bomb will fall or the next meal will come from - feel that Britain is a force for good?

Or, as we remember the introduction of internment in August 1971, the hooded men who were tortured. Or the families of those murdered by plastic bullets?  The files held by the British on the killing of Paul Whitters, killed by the RUC in 1981 aged 15 and Julie Livingstone, killed by the British army in May 1981, aged 14, are sealed. Paul’s can’t be opened until 2059. Julie’s is sealed until 2064.

I’m certain that these families, and many others, who are being denied truth by the British government, do not see the British as a force for good.

And what of the millions in former British colonies across the globe forced to fight for their freedom from a British state that ruthlessly used extra-judicial killings, shoot-to-kill operations, torture and false imprisonment to maintain British domination and exploitation?

British hypocrisy is not a surprise nor is the brass neck with which they claim to be a force for good. But we have a responsibility to call it out. The record of the British Empire and of British governments in the days since Empire; and their actions in Ireland; demand that people are constantly reminded of the reality of British policy and the depth of its hypocrisy and duplicity.