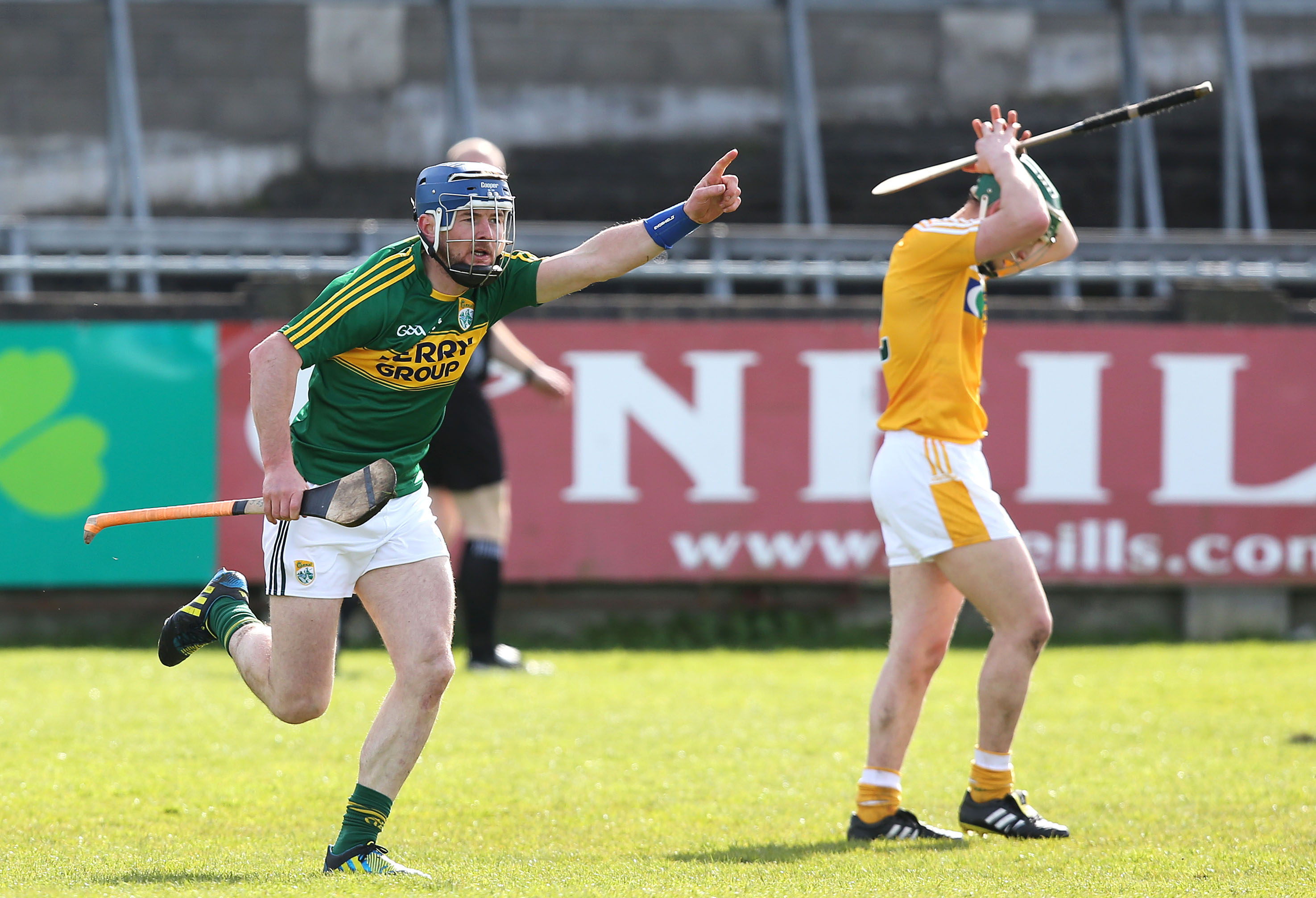 SOUL-searching and tough decisions are now the order of the day for Antrim hurling as they face life in 2A of the National Hurling League following Saturday’s one-point defeat to Kerry in a crunch promotion/relegation game at Parnell Park, writes David Mohan from Parnell Park.

John Egan’s injury-time point secured a shock yet fully-warranted victory for the Kingdom and sealed their place in 1B for 2016.

There were no excuses from Antrim manager Kevin Ryan afterwards, simply an admission that his side were not at the races on a day they needed to be most.

There was no doubting who were the worthy winners on this occasion. While Antrim – aided by a stiff breeze in the opening half – led 0-11 to 0-3 at the break, there was an element of good fortune in this eight-point advantage.

Kerry led 0-2 to 0-1 early on with the towering Michael O’Leary on target, but they failed to add to their tally for 30 minutes as they hit nine wides and passed up three glorious goal chances.

Paul Shiels, Neil McManus and Ciaran Clarke were on form for Antrim and carried the fight to the Munster men.

However, when Colm Harty raced through and goaled for Kerry on 43 minutes, this sparked a mini-revival that saw the gap cut to two. But Antrim hit back when PJ O’Connell found the net.

Leading by six with 15 remaining, again it seemed Antrim were safe but Kerry’s greater desire on the day shone through as they forced Michael Bradley into a mistake close to his own goal and Shane Nolan poked the sliothar towards goal for Harty to finish to the net.

Kerry had all the momentum now and with Nolan and O’Leary on fire, they drew level then edged ahead.

Antrim did rally, with points from PJ O’Connell, Michael Dudley and Ciaran Clarke giving them a two-point lead with four to go, but Kerry were looking much more likely and wing-back Daniel Collins tied the game following a Nolan free before Egan struck for the winner.

“You have to feel for Antrim as they are a good side,” said Kerry manager Eamonn Kelly at the final whistle. “We are a Christy Ring [Cup] team in 1B now and we have to focus on moving forward. It’s a great victory for us and we will enjoy this for now.”

For Antrim, the pain of defeat was plain for all to see.

“It’s obviously seriously damaging to go down to a division below,” accepted Ryan. “This year we were competing with the Limericks and Waterfords – although we didn’t exactly compete with Waterford – but those are the games that bring you on.

There will undoubtedly be some who will feel that Ryan’s time with Antrim is now up following this devastating loss, but the Waterford man remains keen to stay on.

“I just said to the players I am 100 per cent committed up until the end of next year,” he revealed. “There is nothing further from my mind than walking away so long as I have 80 or 90 per cent of that dressing room and reasonable support from the board. If that support from the players wasn’t there, I would have no business being with a group of players, but I have no intention [of quitting]. I have put too much into this and there is too much in the pipeline.”