Saffrons’ eyes firmly on the prize despite lengthy delay 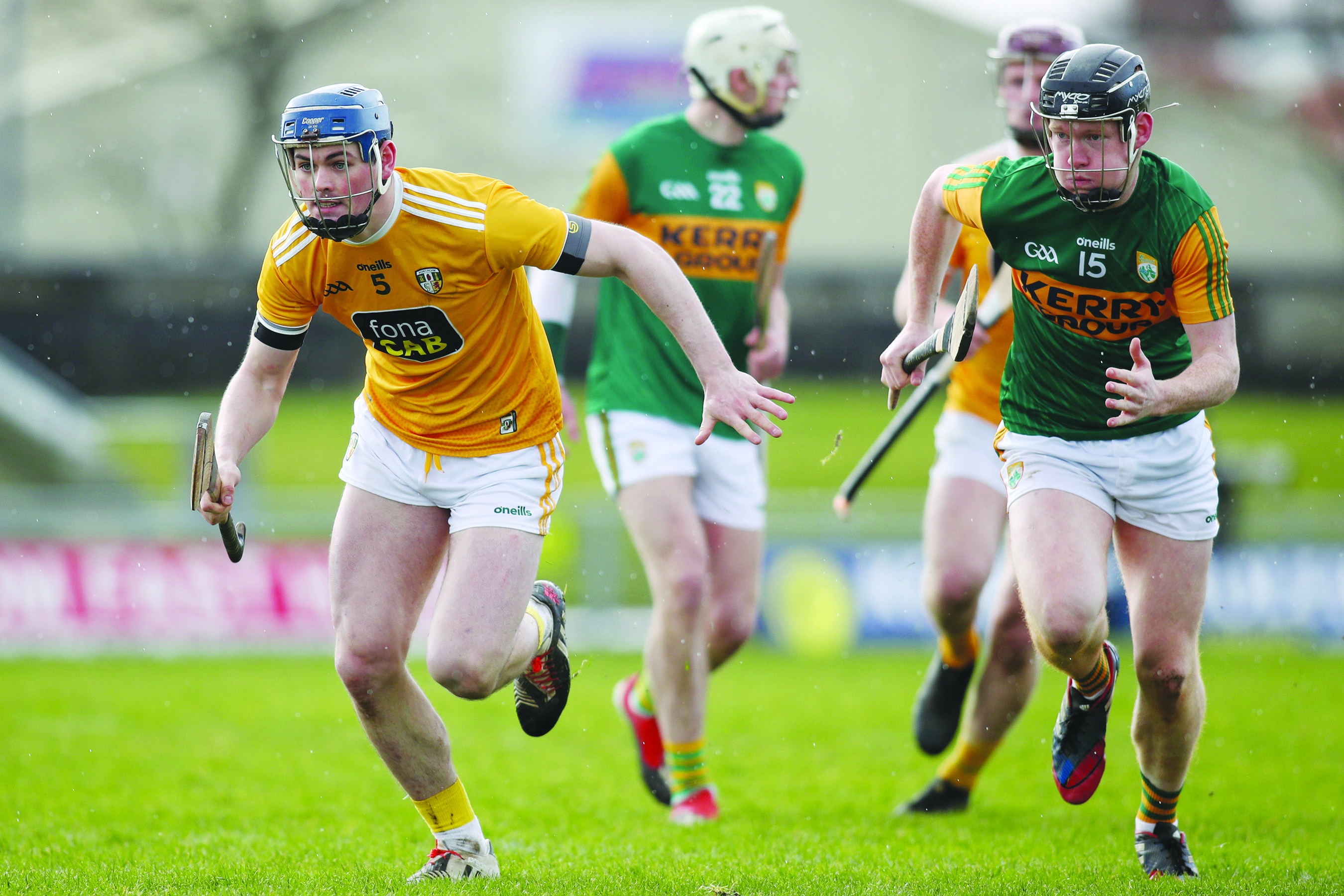 IT will be just over seven months to the day since Antrim and Kerry were due to meet at Croke Park in the National League 2A final when the sides will finally get to decide who moves up into the top tear for 2021 this Sunday in Tullamore.

The Saffrons had been in excellent form prior to lockdown as they gradually built a head of steam throughout the campaign to defeat Wicklow, Mayo, Meath and Kerry before their refixed game against Offaly at Sunday’s venue saw them strike with two late goals to snatch a draw and deny the Faithful County a place in the 2A decider.

Instead, Kerry were to benefit from Antrim’s fightback that ensured they squeezed into the final which will decide who books a place in Division One next term.

League finals are one-off games at the best of times, but the nature of this one exemplifies that fact a little more given the long break both teams have had since their last competitive outing and Antrim manager Darren Gleeson accepts that the momentum of spring is gone, so it will be something of a leap of faith on Sunday to see if his players can quickly get back up to speed.

“We’d be very like Kerry in that we’re unsure whether we have enough done to see where we’re at,” said the Tipperary native.

“There is a bit of uncertainty around it but look, it’s the same for both teams. It’s unlikely both teams will be up to the level they were in the matches we played before the lockdown. I think that’s impossible to get back in three and a half or four weeks (of training).

“Still, I think we have adapted well and trained well. I thought we were coming right there last week.

“There’s a natural hangover there when you are knocked out of the championship with your club as you put everything into that, but then need to refocus on a new goal.

“The boys who have won their respective championship have that buzz which is great, but that will wear off in the group eventually and everyone is then back like for like again.”

The Antrim club championships delivered in spades and it was a testament to all involved that they were able to produce such high-quality games with no club leagues to speak of this year.

On the face of it, those who are members of the county panel would be going back to the panel with their fitness and sharpness in tow, but the step-up to inter-county level produces its own challenges and Gleeson admits his job has been to get his players back into that frame of mind with longer travel and longer days a feature.

“It’s been about getting the lads back into the routine,” he explained.

“They were with their clubs there and that involved short travel down to the local field, get down to training a bit later and getting home earlier.

“Getting boys back into the routine where they are getting home a bit later, travelling more and that extra tiredness that comes with that. There’s also the extra organisation of coming home from work and getting something to eat like you can with club training, but not they have to organise their day to run perfectly so they can train to the level we’re asking them to.

The club championships threw up fresh options for Gleeson to add to the panel. Several players have left but in comes Loughgiel duo Tiernan Coyle and Damon McMullan, whist St John’s defender Simon McCrory has returned to the panel having been away in recent times.

The Antrim boss also reports that Domhnall Nugent - who suffered a serious elbow injury in the Johnnies’ semi-final defeat to Loughgiel - is touch-and-go to play a part this weekend but the progress of the big full-forward will be monitored to give him every chance of selection.

“Domhnall is pushing hard but I’d say the Westmeath game in the Joe McDonagh Cup (next Sunday) may be more realistic,” he admitted.

“I’d be hopeful to have him this weekend but we just have to see how he is this week, but he is very close to being right.

“We have made changes to the panel with three guys coming in and four have now gone but that’s natural and the way it has to be in this environment.

“Our panel has been open-ended so I’m also looking forward to seeing the U20s on Saturday as well to see what’s there.”

Whoever takes the field on Sunday, Antrim will be hoping there is a huge performance to come as victory will see them meet a key objective for the year.

In order to begin climbing back up the rankings, they need to be exposed to competitive games against the top teams in the county and Division One hurling will do just that.

The previous meeting between the teams in Tralee saw Antrim record a 2-20 to 2-14 win and while some will point to Kerry missing several key players including Shane Conway who is one of their marquee players, Gleeson points out that Antrim were also short for that game.

Therefore, he insists the league game will have e no bearing on what transpires this weekend and is confident that if his team can perform, the big prize is there for the taking: “The prize on offer is fantastic and from our point of view, Kerry were missing quite a few players when we met them earlier in Tralee, but who says Antrim were at full tilt that day either with a full squad?

“There are 32 players on each squad and that’s why we have them as we had injuries going into that day. Captain of the team, Conor McCann didn’t start that day, Conal Cunning didn’t start, Conor Johnston didn’t start, Ciaran Clarke... If you want to get into it and go down the list we were missing a few.

“What happened in Tralee won’t matter this weekend but out main objective this year was to win the National League.

“We are in the final on Sunday and I think we have a strong enough squad to do it.”