Saffrons rue slow start as they crash out of Ulster 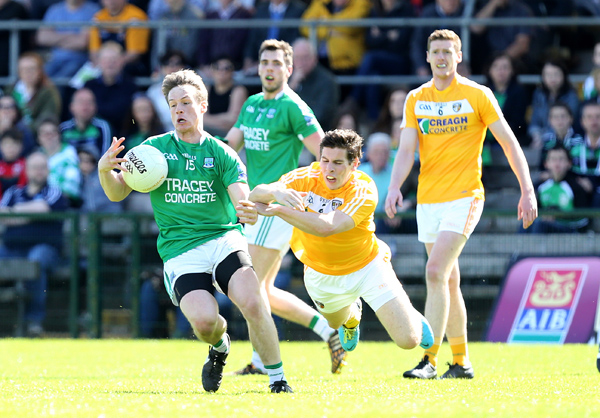 A TOMÁS Corrigan inspired Fermanagh proved just too hot to handle as Antrim crashed out of the Ulster Senior Football Championship at Brewster Park yesterday.
The corner forward kicked nine points, five from frees and two incredible efforts from sidelines to help the Ernesiders continue their recent dominance over the Saffrons who gave themselves just too much to do in the second period after an insipid opening 35 minutes.
Antrim had high hopes they could repeat their 2014 victory at the Enniskillen venue, but their performance was more 2015 as the hosts picked up from where they left off in the All-Ireland qualifiers last year and dominated the opening half.
Antrim’s cause was not helped just before throw-in when towering midfielder, Niall McKeever had to be withdrawn due to a hamstring injury with his place going to Mark Sweeney.
However, it may have been so different had Tomás McCann found the net in the opening seconds when put through by his brother, Michael, but the Cargin man fumbled posession and Fermanagh cleared the danger.
This suggested Antrim were ready to mount a serious challenge, but this was not the case as they simply failed to build any momentum as Fermanagh took control.
A fould on Sean Quigley by Ricky Johnson led to Tomás Corrigan tapping over his first score of the day from a free two minutes in and shortly after, wing-back Declan McCusker appeared upfield to score. Another Corrigan free moved the hosts three clear while at the other end, Tomás McCann was unable to convert as Antrim desperately needed a score to settle.
Instead, things continued to deteriorate as Corrigan (two) and Aidan Breen moved their side six clear by the 21st minute.
Antrim badly needed a way into the game and they almost got it on 22 minutes whena quick free from Kevin Niblock to Michael McCann saw the Cargin man pick out Brian Neeson in the right corner and the St John’s man decided to hit a shot quick and low to the near post, but Christopher Snow made a brilliant save to turn the ball out for a 45 that Neeson converted for Antrim’s first score.
Quigley kicked a free at the other end before Corrigan produced two pieces of magic within a minute, hitting two points from sideline balls just yards from the endline on the left – his first in particular was quite sensational given he had precious little to aim at.
Neeson did have the final say of the half from a free for Antrim, but trailing 0-9 to 0-2 at the break, their cause already looked lost.
However, after a longer than normal half-time break, the Saffrons looked much more energised in the second period.
Neither side could raise a flag in the opening 12 minutes until Tomás McCann fired over after a quick break. This score was cancelled out by Corrigan from play before he hit his eighth of the day from a free to leave eight in it before Antrim started to claw their way back.
Points from Mark Sweeney and John Carron trimmed the gap back to six before Neeson had another shot at goal from the right on 59 minutes, but his effort found the side of, rather than back, of the net.
Still, Antrim looked like the side with all the momentum and after a Tomás McCann free, points from substitutes Ryan Murray and Sean Burke left just three in it with eight minutes to play.
Antrim started to believe, but they were unable to maintain their push as a Corrigan free on 66 minutes halted their revival and two minutes later the game was put beyond them when Quigley gathered a low ball from Paul McCusker, turned Ricky Johnson and rolled the ball under Chris Kerr and into the net.
Tomás McCann did kick a late free, but the cause was lost as the Saffrons were left to rue their first half performance that left them with too much to do to remain in the Ulster Championship and avoid the All-Ireland Qualifiers’ draw they now find themselves in.