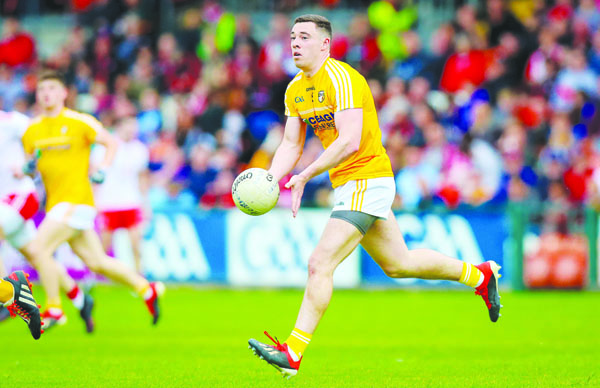 THE summer may feel a world away with storms Ciara and Dennis visiting these shores on successive weekends, but Antrim skipper Declan Lynch believes this Sunday’s clash with Carlow will be like a Championship battle.

Not only are the stakes high for both teams, but a proper rivalry has developed between the counties in both hurling and football.

When the sides last met in the football league back in 2018, Carlow secured a three-point win to clinch promotion from Division Four and the ‘Carlow Rising’ social media campaign soon followed.

While the Barrowsiders were fully entitled to celebrate their landmark achievement, their success only served to highlight Antrim’s failure to secure promotion from Division Four and the sight of the Carlow players celebrating still lingers with Lynch.

“There is a rivalry there and that’s what you get when you have two evenly-matched teams,” said Lynch.

“We played them in a few friendlies in recent seasons and they’ve become rather heated.

“Fair play to them, they beat us up at Corrigan Park to seal their promotion. Sometimes you keep things like that in the back of your mind in case you get the chance to right the wrongs.

“We’ve that chance on Sunday. What sticks in my memory is their backroom team smacking the dugout at Corrigan Park and roaring every time they scored or won the ball back.

“It won’t be the main motivating factor or us, but certain things stick in your mind and drive you on a bit.

“Carlow have been beaten twice already, but they’re still in with a chance of getting promoted so we have to be aware of that.

“We also know that we can, potentially, eliminate them from the equation if we manage to beat them on Sunday.

“They are probably thinking they can still get through with two defeats, but a third defeat would probably be curtains for them. With this ‘Carlow Rising’ happening in recent years, that’s the last thing they would need.”

While a win over Turlough O’Brien’s men on Sunday would all but rule Carlow out of the promotion running, it would also provide a boost to Antrim’s prospects of escaping Division Four.

With a defeat to Sligo sandwiched between wins over Wexford and London, the Saffrons know their fate remains in their own hands provided they win their remaining four games.

“We know if we get those four wins, unless something mad happens, we should be promoted,” added Lynch.

“We have four tough games left – we only have to look at what happened in the Wicklow versus Sligo game last Sunday.

“We’ve Carlow and Limerick at home, then Wicklow away and Waterford at home. Waterford beat us at home last year, so they are four tricky games left.

“We want to go out and get the win on Sunday and keep the momentum going. We feel like we didn’t perform against Sligo and we still probably still could have came away with a point.

“We went over to London and, with the way the weather was, anything could have happened.

“I think it showed the new character in the squad that we got of there with a win and a well-deserved win at that. There wasn’t much football played – it was true hard work.

“We probably got a wee bit carried away with ourselves after the Wexford win. We probably didn’t get enough credit for that win, but we also probably gave ourselves a few too many pats on the back.”

Carlow boss O’Brien knows his side must win on Sunday or they’ll be faced with another season in Division Four. They were hit by a 1-1 salvo from Limerick in injury-time as they lost their round three clash earlier this month.

Antrim’s form has been solid enough so far and, with three home games out of their last four, they’ll fancy their chances of clinching one of the two promotion berths.

Games between these teams are usually tight and tasty. Expect more of the same on Sunday with the Saffrons taking another step towards securing their own ‘rising’ in Glenavy.