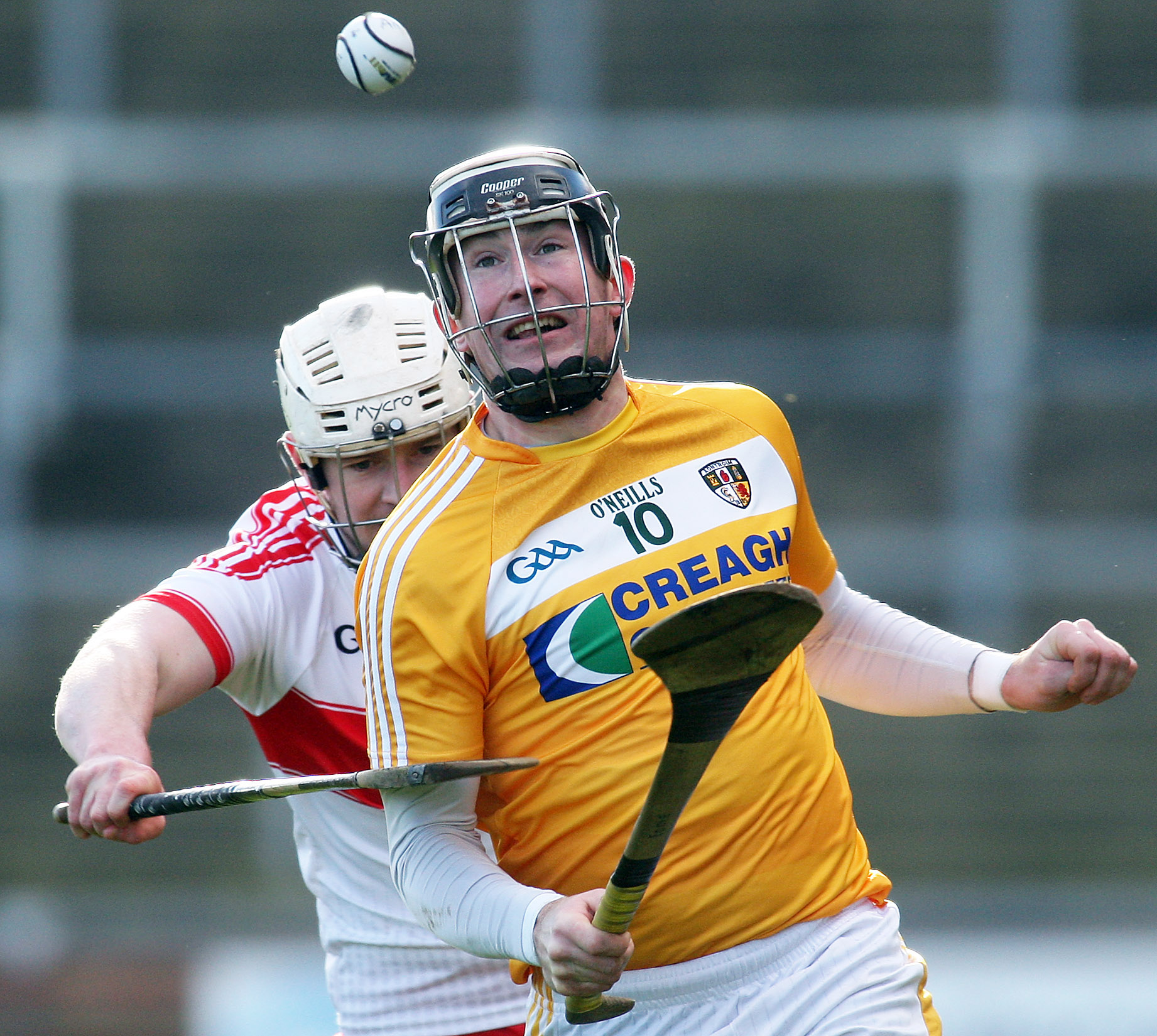 From David Mohan in Celtic Park

ANTRIM overturned a five-point half-time deficit to run out six-point winners and get their National Hurling League 2A campaign off to the perfect start at a sunny Celtic Park in Derry yesterday.

The display in the second period, in which Antrim outscored their hosts by 1-15 to 1-4, was in stark contrast to the first when Antrim couldn’t get anything going and looked sluggish from the off.

Ruairi Convery gave a first-half exhibition of free-taking for the Oak Leafers. He opened his account with a free from inside his own half before tapping over from straight in front of the posts.

Ciaran Clarke was moved to free duty for Antrim after Liam Watson missed a couple of early chances and Clarke duly converted to open his side's account before Eddie McCloskey – Antrim's only forward to perform in the opening half – played an excellent ball to James Black who fired over from range to level the game on 13 minutes.

Convery then restored the Derry lead before the hosts found the net on 15 minutes when Antrim goalkeeper Chrissy O'Connell batted down Alan Grant's shot and Gareth O'Kane profited from the mistake to whip the ball home.

That three-pointer gave the home team real belief and although Eddie McCloskey replied immediately after, the hosts always found an answer. Convery and Clarke traded frees before Derry's Shane Farren came into the game, hitting two excellent points while Convery maintained his form from frees, driving one over from his own 45. Antrim just about kept in touch with Clarke hitting a free and McCloskey pointing on the run, but they were five adrift at the break with Derry holding a deserved 1-8 to 0-6 advantage.

There must have some stern words spoken in the Antrim dressing room at the break as it was a vastly improved display in the second period. Conor Johnston clipped over a score from the right while McCloskey drove over his third of the day to leave just a goal between the teams.

Niall McKenna then floated over a score as Antrim continued to take a grip on proceedings and this was confirmed on 48 minutes when they hit the front with a rather fortuitous goal from Kevin McKernan. The midfielder’s long free dropped short but went through a ruck of bodies and deceived Darrell McDermott to end up in the net and give Antrim a 1-9 to 1-8 advantage.

The rampant Saffrons were now fully in control and Clarke clipped over a free before Derry finally got their first score of the second period on 51 minutes when Breandán Quigley pointed from under the stand.

However, Tom McLean's men were unable to wrest control back as Clarke replied at the other end before Kevin McKernan hit the first of his four points as the Sarsfields man found his rhythm.

The visitors continued to pile on the scores and substitute Saul McCaughan hit the score of the day on 63 minutes when with his first touch as a senior inter-county hurler he somehow split the posts from the tightest of angles on the right.

This moved Antrim five clear and while Convery kept Derry in touch with a free, Antrim were finding their range much better with McKernan (two) and Clarke pointing at the other end while Derry's Eugene McGuckin made a vital interception on Conor Johnston to deny the livewire Antrim attacker a shot on goal.

Convery gave Derry some hope as the game moved into stoppage time when his 20-metre free found the net despite the best efforts of O'Connell, but there was no real prospect of the hosts getting much closer as Antrim finished strong to run out six-point winners.