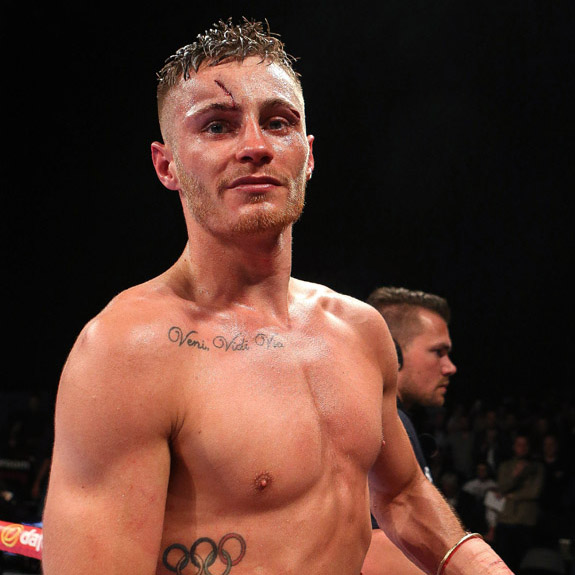 The North Belfast man produced a sensational performance to dominate the defending champion from start to finish although this seemingly didn’t win the approval of American judge, Clark Sammartino, who somehow scored the bout 118-108 in favour of Haskins. It later emerged he had mixed up the fighters and was awarding rounds and knockdowns to Haskins instead of Burnett.

Thankfully for Burnett, judges Jerry Jakubco and Dave Parris had things right and their identical 119-107 scorecards were more in tune with what had transpired over the 12 rounds as the emotional 25-year-old Newington man celebrated his title win with his team and family afterwards.

“This is a lifetime achivement and I have worked so hard for this.,” he said.

Burnett was in irrepressible form, belying the fact he came to the ring with just 16 previous bouts as a professional, showing maturity and concentration to supplement his incredible speed, fitness and sharpness to draw Haskins into mistakes and punish him with powerful rights throughout.

Even a nasty gash on his forehead, sustained by a second round clash of heads, did not halt his momentum despite initial concerns at ringside that referee Marcus McDonnell might have to stop the fight due to the blood pouring into his eye. But credit to his cutsman, Ian Johnson, who did great work to patch him up and stem the flow.

Haskins was looking to tie Burnett up any time the challenger threw and punish him on the inside, but he was simply not allowed to as the home favourite commanded the centre of the ring and judged his distance perfectly to land eye-catching shots throughout.

It was evident what way this contest was going and in the sixth round, the Newington man made it clear it was going to be his night. A chopping right seemed to stiffen the legs of Haskins midway through the round as Burnett's power began to really tell and towards the end of the round, two powerful rights felled the champion. He did beat the count, but it was merely delaying the inevitable.

While Haskins seemed to struggle with an arm injury, Burnett was a level above. Again, he had Haskins on the floor in the 11th and a follow-up onslaught almost forced the stoppage, but the bell saved the champion who bravely battled through to the final bell.

There was that shock of a split decision, but there could be no doubting the victor as an emotional Burnett celebrated wildly in the ring with his family and team as his night to join the glorious list of Belfast world champions had arrived.

"How could I be more proud? Nothing I have done before tops this," said Burnett’s trainer, Adam Booth.

"The special thing about this is that he had only 16 fights going into this. The growth he has had mentally, not having the fights to give him that, just shows the belief and conviction in what he does."