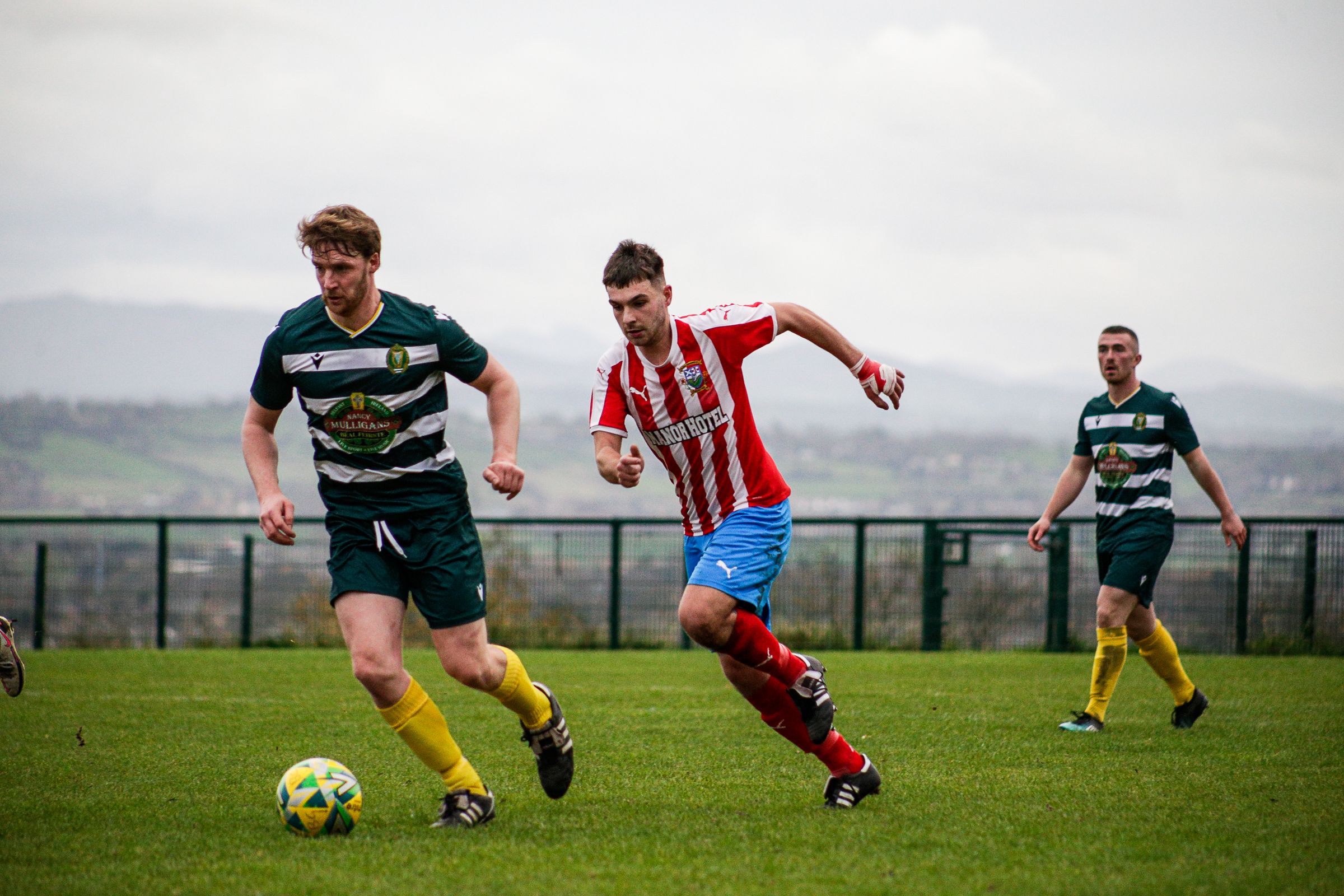 TWO goals in the opening 20 minutes proved to be enough for Belfast Celtic at a chilly Glen Road Heights on Saturday as they claimed the points over Glebe Rangers.

Darren Murray and Brendan Glackin found the net for the hosts with Glebe hitting back in bizarre or brilliant circumstances - depending on your point of view - as goalkeeper Glenn McMullan's long punt ended up in the net.

Misfortune would then befall them as what looked to be a certain equaliser before the break saw the ball take a crazy bounce off a divot and go over with the net waiting to bulge, but the West Belfast side survived this and a late scare as they took the win.

The hosts wasted little time in gathering a head of steam as they looked a threat from the off.

Just minutes in, Brendan Glackin stung the palms of McMullan with a thumping drive and then Murray got his head to a corner with the ball breaking off a Glebe player and cleared.

They really looked in the mood and didn't have long to wait for the opening goal as on 10 minutes, Lee O'Brien swung in an inviting cross from the left and this time there was no denying Murray who rose and headed home.

Shane McKenna had an opportunity to double his side's money on 17 minutes when weaving in, but his shot lacked purchase and McMullan got down to gather.

Glebe was being pinned back and were not able to get any attacking momentum with a Darren Henderson snapshot that was well off target all they had to show for their early efforts and their cause became even more difficult on 20 minutes as Glackin picked up the ball in acres of space around 25 yards from goal and had time to switch onto his left, steady and send a well-struck effort low to the net to make it 2-0.

There was a sense they could run riot, but then came that incredible moment on 24 minutes as McMullan went long with the ball beating everyone upfield, taking a big bounce and sailing over Paul McLaughlin's head and into the net.

This sparked the visitors to life, but the greater goal threat was coming from Belfast Celtic with Glackin having a half-chance with a header, but couldn't get enough on it.

Four minutes from the break and another crazy moment at the other end as Darren Henderson was played in and did everything right to lob McLaughlin with the ball heading into the net, but it took a huge bounce and went over - an incident that would make any blooper reel.

On the stroke of half-time, Murray teed up Glackin but McMullan saved to keep it 2-1 at the break.

The game really opened up in the second period with both sides looking to get on the front foot, but the hosts seemed to have the greater threat with Glackin played in early, but could only find the legs of McMullan.

A good ball up to Murray was inches too long to blow him to make a solid connection, while he was then crowded out when weaving in on goal midway through the half.

On 71 minutes, Glackin had an effort on the left of goal that just went outside the far post and Murray again just couldn't get his shot away when played in with 15 left.

Glebe were hanging in there with Murray's header straight at McMullan and then poked wide late on and the hosts were almost made to pay in stoppage time as Glebe won a free-kick at midfield, went long with the ball breaking to Jordan Harrison whose effort was blocked, but fell kindly for Henderson six yards out, but he shot too high with the goal at his mercy.

The hosts survived and even though they lost O'Brien to a red card for what appeared to be back chat late on, they took the win and the three points.