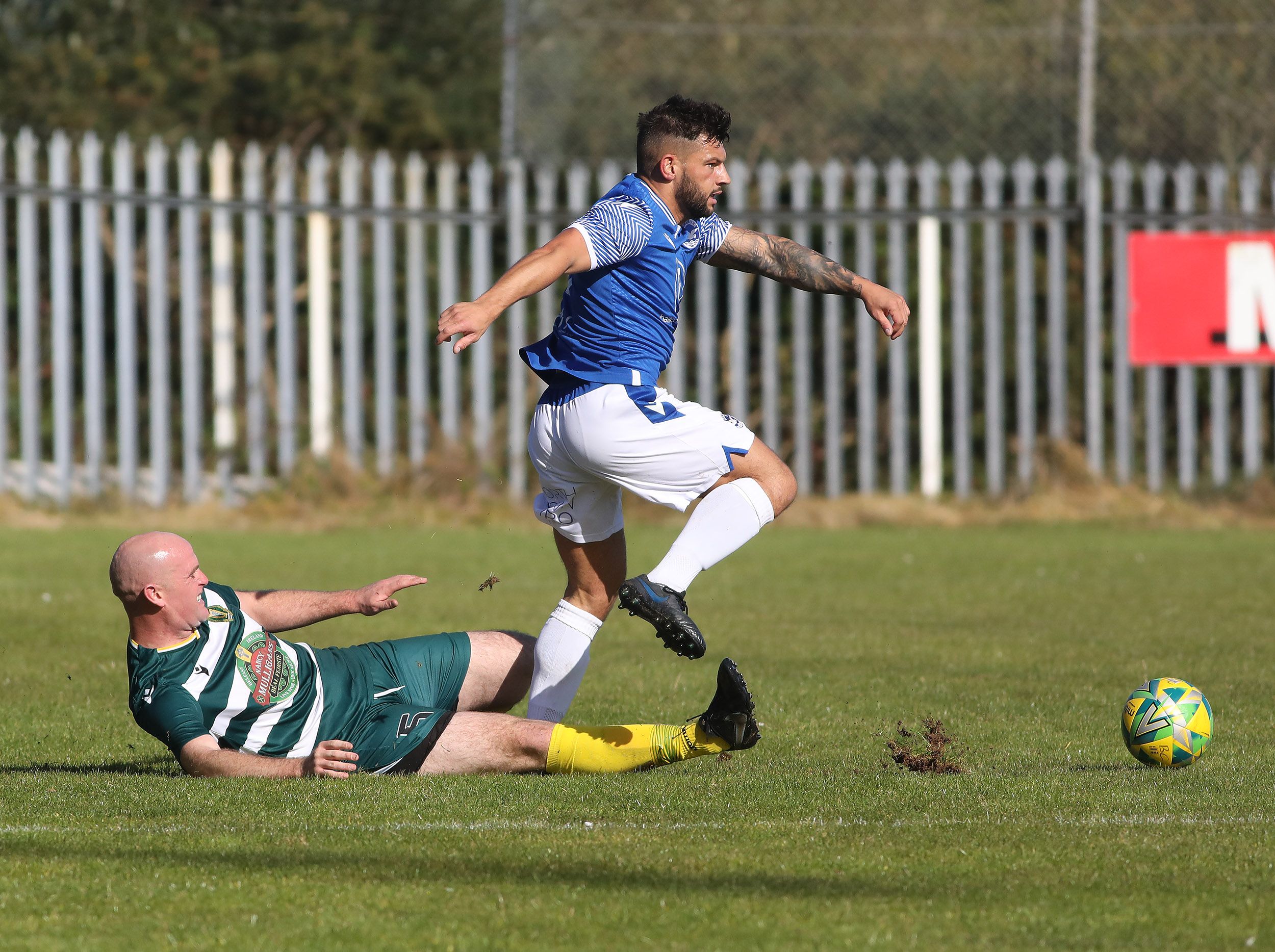 SECOND half goals from Ben Arthurs and Adam Neale saw Bangor advance into the Fourth Round of the Steel & Sons Cup at the expense of Belfast Celtic on Saturday.

The Seasiders enjoyed the better of the first half and were rewarded early in the second period with the second killing the game off 12 minutes from time as the hosts pushed for a leveller in a game that took a while to come to life at a sunny Glen Road Heights.

The hosts probed early, but couldn't beat the offside flag that curtailed a couple of early forays into the Bangor half.

However, the visitors began to get on the front foot without creating a lot. Indeed, there was little by the way of goalmouth action for the first 20 minutes with neither goalkeeper tested as the final ball was off.

Neither could really gain a foothold in the middle with the sides competing well, although Bangor felt aggrieved that they had a penalty appeal waved away on 20 minutes when Seanen Foster went down, but there seemed to be a touch from a defender before contact.

Bangor did then force home goalkeeper Paul McLaughlin into action on 25 minutes as first, Ben Arthurs had an effort saved and from the follow-up, McLaughlin made another top-class save from Jamie Glover with the ball out for a corner that came to nothing.

McLaughlin made another quality save on 37 minutes as Adam Neale slid a perfect ball into Arthurs, but the goalkeeper was equal to his stinging effort at the near post with the sides going in at the break scoreless.

For all McLaughlin's brilliance in the opening period, he will be disappointed by the manner of Bangor's opener two minutes after the break as Adam Neale had a shot from outside the penalty area that the Hoops' goalkeeper got down to but was unable to hold as the ball squirted free and Arthurs was only too happy to poke home.

It was perhaps the goal the game needed overall as it opened up a little as the hosts went in search of the equaliser and their first chance arrived soon after as a long throw Ito the box by Stephen Murray was met with a header that went just narrowly wide.

At the other end, Bangor had a glorious chance to double their money when Reece Neale curled in a free-kick from the left and Ryan Arthur had a free header at the back post, but his effort was off-target.

The hosts continued to press, however, and they had a big chance on 65 minutes as Anthony McGonnell swung in a corner from the right with Shane McKernan lurking at the back post, but his header from just years out was too high.

Denver Taggart then had a goal-bound curling effort tipped over by James Taylor on 71 minutes as it seemed the city side was getting closer.

But there was still an attacking threat from Bangor with Mclaughlin making up for his earlier error as he got down to smother from Arthurs just years from goal, while the follow-up from Ryan Arthur was too high.

The hosts survived, but not three minutes later as a long ball upfield broke favourably to Adam Neale who rounded McLaughlin and rolled into the net to make it 2-0.

Belfast Celtic continued to look for a way back into this game to set up a grandstand finish but Brendan Glackin couldn't get a close-range effort on target.

Five minutes from time, their day was summed up as Bangor goalkeeper James Taylor's attempted punch from a cross spun up in the air with Darren Murray getting his head to the ball that was cleared as far as McGonnell who shot, striking Murray who was on the ground and the ball spun towards goal with Taylor getting down at full stretch to keep it out.

McGonnell then swung his boot at a late chance with the effort too high, but tie was no longer on the side of Belfast Celtic as Bangor advanced into the next round.