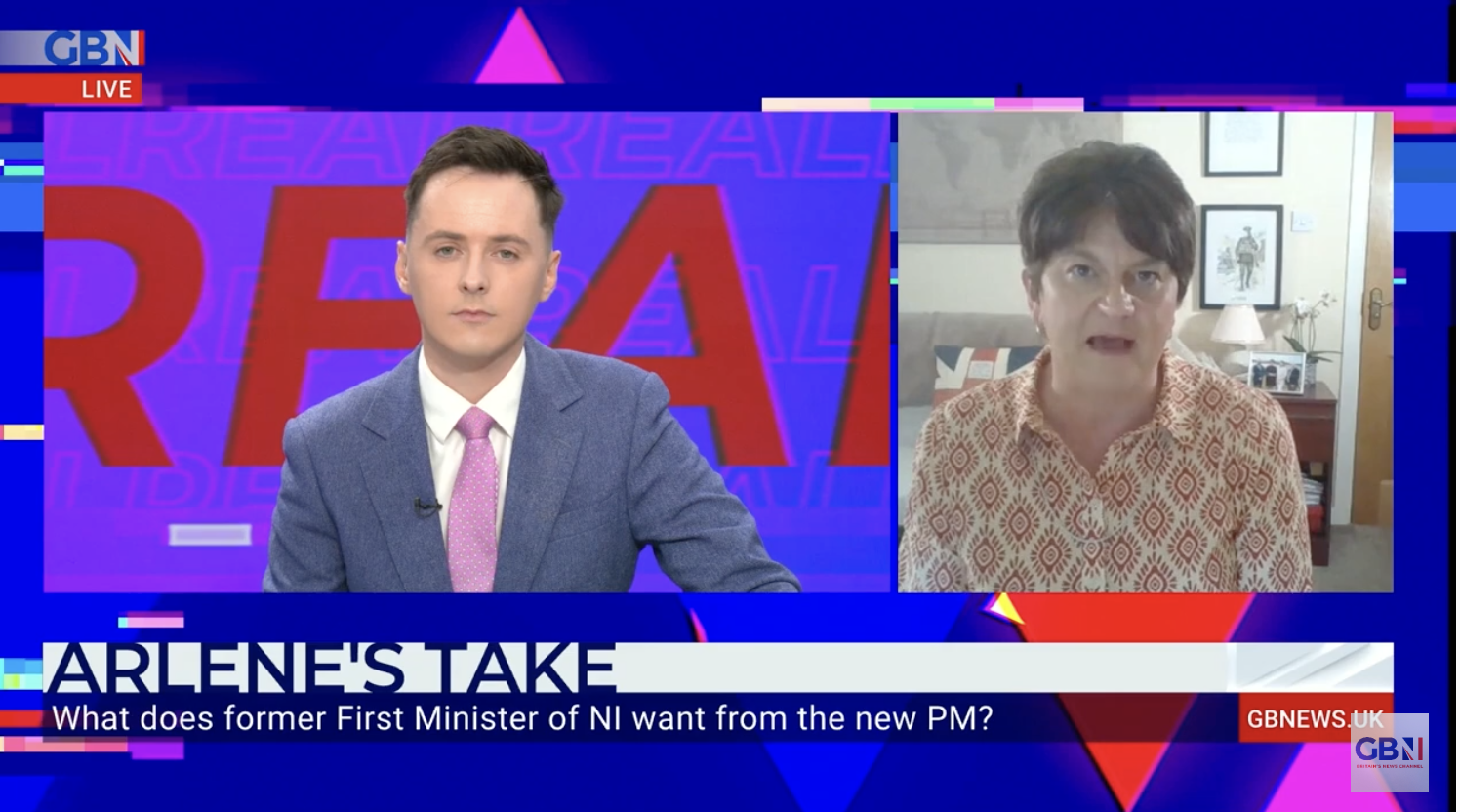 ARLENE Foster appears to have lost a friend and colleague at GB News after the anti-woke station© cancelled presenter Darren Grimes on Twitter. If he is indeed gone, it was a brutal and humiliating defenestration, the professional northerner having learned his fate online while he was on holiday.

When he heard the news he promptly blacked out his Twitter feed, deleted his history and went to radio silence. But in an an interview with Squinter from his bolthole, Darren revealed that he hadn’t quite believed it when he saw the Tweet revealing the station’s decision to axe him. “Why aye, man, Ah was havin’ a canny Newcastle Brown Ale when Ah were told the news. That Meghan Markle isn’t half an entitled cow, tha knows.”

In the normal run of things somebody losing a job wouldn’t be a cause for levity, but since Darren was a co-founder of the horribly right-wing Turning Point UK – a spin-off off of the Trump cult Turning Point USA – he’s probably fair game for a gentle dig, particularly since in the ten or so years that he’s been vocal in the public square he’s made a career out of baiting anyone he deems not to be in sync with his sneering Tory-boy worldview.

It was on the Grimes YouTube channel Reasoned UK that historian David Starkey made an incendiary series of race-baiting remarks on slavery and race. “Slavery was not genocide,” he told Grimes, “otherwise there wouldn't be so many damn blacks in Africa or in Britain, would there?” Starkey paid a heavy price in terms of his standing in the academic community in the wake of his poisonous little chat with Grimes. And young Darren used his GB News platform to join in the hysterical pile-on against a familiar gallery of figures hated by the UK right: Meghan Markle, Greta Thunberg, Gary Lineker. What these three – and others – have in common in Darren’s world is that they are ‘woke’, and GB News’s mission statement is to oppose wokeness wherever it rears its ugly head. It has also tasked itself with fighting against ‘cancel culture’, which is kind of weird, because it just cancelled its most vocal opponent of cancel culture and wokeness.

But what did the boy Darren do wrong?, Squinter hears you cry. Did he stand up for trans rights? Did he warn against the impending climate catastrophe? Did he ride to wthe GB News studio on a bike? No, actually, he did none of those things. What he did do was to speak of Prince Charles’s unsuitability to be king just weeks before the Nellie Dean inconveniently popped her diamond clogs. “I must be honest with you,” he said on his show, Real Britain, “in my eyes his royal highness, the Prince of Wales, Prince Charles to you and I, is less crown prince and more clown prince.” GB News was so happy with this bit of clickbait philosophy that they tweeted the clip out for everyone to watch and hear. Needless to say, the queen doing a fly one and passing away so quickly after that treasonous statement aired ensure that it went viral on social media, not least because as soon as the crown was rested on Charlie’s ears Darren was straight in with “God save the King.”

Which was nice. Now all that remains is for GB News to take care of Darren’s senior colleague Dan Wootton, who’s been similarly and sneeringly critical of Prince Charles before he became king.  Anyway, here’s an ode to the boy prince, who will no doubt resurface on another entertainingly bonkers  platform to share his compelling thoughts on the anti-woke station© itself going woke. A GB News fellow called Grimes, In an interesting sign of the times, Launched a battle on Woke, That went up in smoke And he’s now back in northerly climes.

But wait. The lad now claims his cancellation has been cancelled and he may be back on the airwaves sooner rather than later. So now it seems that the cancel culture that cancelled Darren may have been cancelled.  Watch this space. And pass the paracodol.

A cuddly nation of minorities

DUP statement in wake of the latest census figures… WE are today a nation of minorities. The historical labels of Protestant-Catholic are redundant.Yes, our party has strong links to the Free Presbyterian Church, which still views the Catholic Church as the Whore of Babylon and which just blanked the queen’s funeral because there were going to be Taigs there. Yes, in the past our members have said unfortunate things. That Catholics and their priests should be burnt in an incinerator. That Catholics breed like rabbits and multiply like vermin. That dead Popes would burn in hell. That Taigs don’t pay rates. But those were different times. Times when Queen’s University still played God Save the Queen at graduations. Times when the union jack flew over City Hall. Curry my crocodile yoghurt times. The future’s bright, the future’s Orange times. Willie Frazer was a great Ulsterman times. Catholics living in Fenian Valleys times. But that was then and this is now. The dirty whores and bitches, the dirty inbred Fenian wenches – that language disappeared long, long ago, In 2019, to be exact.

Those times are gone. And we embrace this nation of minorities. The Catholic minority. The Protestant minority. And yes, even the gay minority. It’s true, we have had our issues in the past with the gay community, or as we called them back then, poofs, faggots, perverts and sickos. Yes, we discriminated against them;  yes we denied them their basic rights; yes, we demonised and derided them. But that was then and this is now. Change is in the wind. Once we as a party unanimously opposed same-sex marriage. Today the amount of party members against same-sex marriage has plummeted to 99.99 per cent. That is a sign of our total commitment to change.

And to our neighbours of colour, more pieces in our colourful and wonderful jigsaw of humanity, we say: you are welcome and you are respected. No longer are people we don’t like called c**n face; no longer do our MPs order from the Chinky; no longer are Trump and Farage our poster boys; no longer is Songs of Praise run by Black Lives Matter; no longer are eastern Europeans clogging the courts; no longer are Muslims and Ramadan fair game for stabbing jokes; no longer do we want to send the ethnics home.

What we need, in fact, is a great big melting pot. Big  enough, we hope, to hold the world and all it’s got. Keep it stirring for, say, a hundred years or more. And turn out, in the fullness of time, coffee-coloured people by the score.

(Note from editor: Does this last bit seem familiar to anyone else?)

Will the last person to leave royal Ulster switch off delight?

HERE’S the front page of the News Letter on Saturday (right), as loyal Ulster’s most strident voice attempted to come to terms with the census results.

It seems from reading this that the SDLP – and leader Colum Eastwood in particular – had expressed “delight” at the fact that Catholics now outnumber Protestants in This Here Pravince.

The news kind of jarred with Squinter, since the last thing any nationalist or republican with a titter of political wit would want to do after such a landmark event as that census finding was to crow or otherwise rub it in as a clearly unsettled unionist community attempted to come to terms with the news.

And because Colum does indeed have a titter of political wit, Squinter found out on reading further that the Derry man had said no such thing. The “delight” that the News Letter referred to was the interpretation of Colum’s census reaction speech by an obscure Canadian academic. Professor John Wilson Foster (who, the News Letter needlessly informed us, goes by the name of ‘Jack’) commented: “After the census revealed that there are now more Catholics in Northern Ireland than Protestants, the SDLP leader Colum Eastwood issued a statement that seemed to convey his delight at the findings.” So the fact that a bloke nobody’s ever heard of reckons that Colum Eastwood was delighted at the census results enabled the News Letter to splash the headline ‘SDLP “delight” at census attacked’. Thus, Prof Jack’s opinion on what the SDLP leader said was turned into a reality that has been attacked. Attacked by whom? Why, by Prof Jack, of course. That’s journalism eating itself right there.

But why, one wonders, would the News Letter want to canvass the opinion of someone who spent his career not on the mean streets of Belfast or Derry, but among the ponderosa pine forests and the salmon-rich rivers of British Columbia? Turns out they didn’t interview Prof Jack at all. Turns out Prof Jack wrote a stern letter to the paper after reading the Eastwood statement.  And the News Letter editor decided the letter was so drenched in import, so heavily freighted with relevance, that it was worthy of a front page splash.

Which is, ah... delightful.