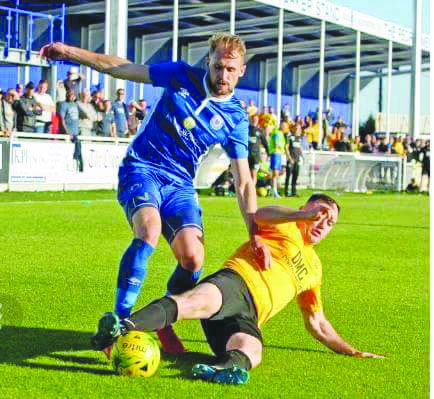 ST James’ Swifts begin a new chapter in their club’s history on Sunday when they play their first official fixture at Donegal Celtic Park after agreeing a ground-share deal with their West Belfast neighbours.
Having played their home games at nearby Woodlands last season, the Swifts will begin their pre-season schedule at DC against National League South outfit Billericay Town.
St James’ Swifts have forged a close relationship with the Essex club and share a sponsor, DMC Contracts LTD.
The West Belfast club brought three teams over to the AGP Arena last summer and will return the favour when they host The Blues on Sunday.
St James’ Swifts chairman Damien Lindsay says the club is relishing the start of the new campaign and believes the move to DC is a signal of the club’s intent for the future.
“We’ve played matches there last year, but this is our first official game at Donegal Celtic,” stated Lindsay.
“The committee, the backroom team and players and their families have been working away getting everything cleaned up and ready for the game.
“We are hoping for a big turnout. It is a big moment in our history.
“We entered into talks during the end of last season with Donegal Celtic regarding the ground-share.
“We have ambitious to get the club into the top echelons of the Irish League.
“For that to happen, we need to have a ground that is fit for purpose.”
Lindsay is hoping the move to the grass surface doesn’t impede the side’s progress, having garnered a fine record on the 3G surface at Woodlands.
“It might take a bit of getting used to,” said Lindsay.
“All we can do is try to adapt to it as quickly as we can.
“It will take a bit of getting used to. We played most of our away games last year on grass and it didn’t seem to hinder our performances.”
As well as moving to the 2,300 capacity stadium, St James’ have also illustrated their ambition to progress further by making a few eye-catching signings ahead of the new season.
Former Cliftonville and Warrenpoint Town defender Dermot McVeigh has joined the Swifts who have also signed Aaron Smyth, Stephen O’Neill and Brendan Glackin in recent weeks.
Lindsay is hoping the experienced quartet can help the West Belfast outfit challenge for the Ballymena and Provincial Intermediate League title once more having finished third last season.
“There is a plan in place for the next five to seven years - we are building a squad of quality players and Dermot (McVeigh) will fit in well,” stated the St James’ Swifts chairman.
“We’ve also brought in Aaron Smyth, Brendan Glackin and Stephen O’Neill as well. It shows our intent. We are here for the long haul and to give it a good go.
“Probably a bit of inexperience cost us last year, but our lads were fantastic.
“They worked their socks off and we’ve a great following there as well.
“Signing the more experienced players will bring the younger lads on.
“Damian McStravick (Swifts manager) is bringing young talent through as well and they are getting their chance.”
Lindsay added that he doesn’t envisage any further signings ahead of the new campaign which begins with a home game against Newtowne on Saturday, August 11.
They will be joined in the Ballymena and Provincial league by Donegal Celtic after the Suffolk Road outfit suffered relegation from the Bluefin Premier Intermediate League last season.
Champions Glebe will also remain in the league after forgoing the chance to play Mid-Ulster Intermediate champions Dollingstown for the right to replace DC while Bangor will also be fancied to make another strong challenge after finishing just one point behind Glebe last season.
While St James’ will be hoping to be in the mix, Lindsay insists progress isn’t solely measured by silverware.
“We would love to be in with a shout again towards the end of the season – that’s all we can ask,” said Lindsay.
“Everybody has bought in to what we are trying to do. We got a good run in the Steel and Sons Cup last season when we were beaten by Linfield Swifts in the quarter-final. A few run in the Irish Cup would be nice. As long as the lads are giving it their best, we can’t ask more much more.”
Tickets are £5 or £3 for U18s and are available to purchase in advance. Supporters can also pay at the gate while St James’ Swifts merchandise will also be on sale at the ground.