St Paul’s bid to go one better in Junior final 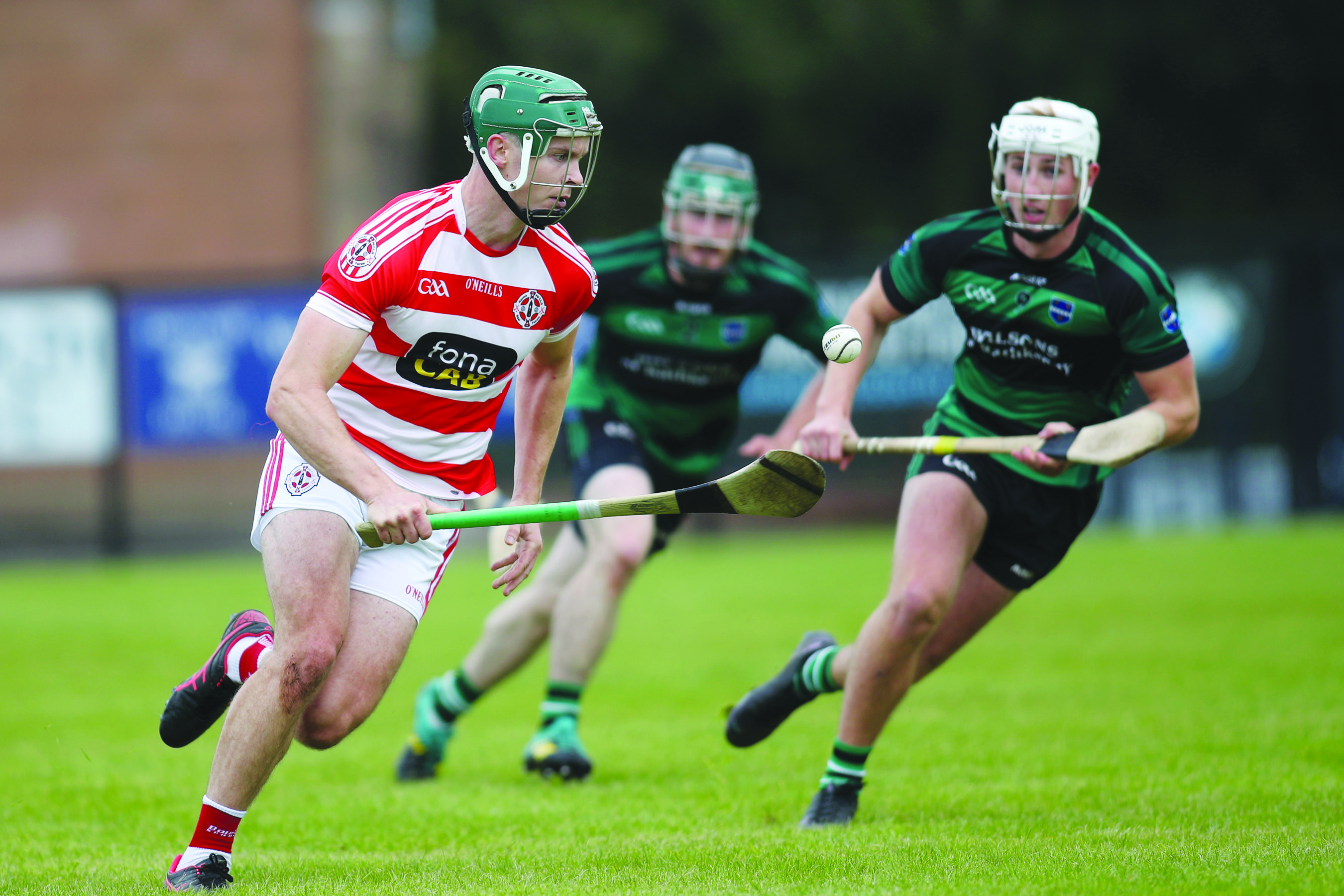 Antrim star, Stephen Rooney will be key for St Paul's as they bid to make up for last year's Junior Hurling Championship final defeat when they face Rasharkin on Saturday John McIlwaine

ST PAUL’S will bid to go one better when they contest their second successive Antrim JHC final with St Mary’s Rasharkin providing the opposition at Dunsilly on Saturday afternoon.

This time last year, St Paul’s suffered a 0-20 to 0-14 defeat to a Desy McClean-inspired Gort na Móna in the decider at Hannahstown.

However, the Shaws Road side will now carry the burden of favouritism following their 1-15 to 0-15 over competition favourites Cushendun last Saturday.

When Robert Emmet’s won the Antrim JHC title in 2018, they scored a 10-point win over St Paul’s in the semi-final, but Ronan McKenna’s side gained their revenge on Saturday.

A massive 0-11 haul from Antrim star Stephen Rooney and a goal from James Farrell proved decisive for the West Belfast men and their manager was delighted with the character delighted by his side.

“We were very nervous at the start for some reason,” said McKenna.  “Maybe it was because it was the semi-final of the Championship or maybe it was because we’d be played so well of late we just expected to click into gear again?

“Cushendun are a good side and they beat us by 10 points when they won the Junior Championship two years’ ago. We knew what we were coming up against.


“The fact that we’ve closed that gap in two years – I’m absolutely delighted.
“I always knew we’d go close because of the work the boys have put in, but I also knew it would be won in the closing stages of the game because it would be a close match. That’s exactly how it panned out, but it puts you through the ringer a bit.”

He added: “We got them in and got them settled and went over the gameplan a bit. They (Cushendun) had the wind in the second half so we had to up our game again.

“They hit a few wides early in the second half, just like we did at the start of the first. We were probably hanging on a bit at that stage to be fair. Our substitutes made a difference when they came on.

“We didn’t score for a long period in the second half, but we managed to keep them to long-range points and they never looked like getting in for a goal I was delighted with our defence.

“That set the foundation for the boys to go up the field and stick the ball over the bar.”
McKenna also paid tribute to St Paul’s star man Rooney for his mammoth 11-point tally. The Antrim ace recovered from missing his first three attempts at the target to finish as the game’s highest scorer while he hit six of his side’s final seven points in the crucial fourth quarter.

“That’s the experience and leadership you need from a county hurler,” remarked McKenna.

“Stephen might be playing slightly out of position at club level, but he gives us that added dimension up front.

“He is a very strong, powerful hurler and a good runner and he can break the tackle. He is great from frees as well – it might have taken him three or four to find his range, but he was lethal after that.”

Moments after the full-time whistle blew in Ballymena, renowned GAA photographer John ‘Curly’ McIlwaine informed McKenna that Rasharkin had beaten his native Glenravel in the other semi-final at Armoy.

The winners of the St Paul’s and Cushendun game were always going to be installed as favourites given their high-scoring wins in the earlier rounds, but the St Paul’s boss insists St Mary’s have the potential to cause an upset.

“Rasharkin have always given us our fill in the league in recent years,” stated McKenna.

“We haven’t played them so much in the Championship. We went up to play them in the first game back after lockdown and we were lucky enough to grind out a result.

“It will be a different game next weekend. I know Rasharkin are always up for a Championship battle and we’ll have to match that.

“They are always a physical side and they play with great intensity, but I think we showed today (against Cushendun) that we have the staying power as well.

“Our lost out to Gort na Móna in the final last year, so I think we owe it to ourselves.”

St Mary’s are sweating on the fitness of James Scally ahead of Saturday’s decider after the corner-forward was withdrawn before half-time of their 2-12 to 1-8 win over Glenravel.
McKenna will be hoping to have a full squad to pick from, provided the dual players all came through Wednesday night’s Intermediate Football Championship semi-final against Moneyglass.

“It will just be about rest and recovery for the dual players this week and hopefully, we can enjoy the build up to the game. We’ve only three or four dual players and we’ve a big panel,” said the St Paul’s hurling boss.

“We’ve been able to chop and change the panel all year, but hopefully everyone will be available for the final.”

The saying goes: “you have to lose one before you win one” and St Paul’s ought to be primed for victory after losing out to Gort na Móna in last year’s decider.

Rasharkin are certainly no mugs at this level having won the 2015 JHC title after losing the 2014 decider to Glenravel. Shane Hasson was their star player last weekend against Con Magee’s, scoring 2-5.

It would be tempting for McKenna to post Rooney to do a man-marking job on Hasson, but St Paul’s would miss his influence further out the field.

The pace and movement of Colm McLarnon and James Farrell caused Cushendun problems and Rasharkin are likely to assign Liam Tunney and Conor Doherty to track the St Paul’s attackers.

While St Paul’s only managed four points from play against Cushendun, they showed a lot of grit to engineer the crucial scores when it matter and, ultimately, they ought to prove too strong for Rasharkin on Saturday afternoon.