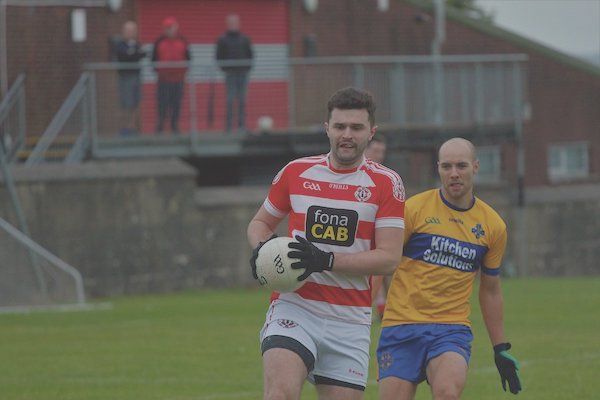 ST PAUL’S held their nerve late on as they quelled a St Teresa’s fightback to claim victory over their close rivals at the Shaws Road on Wednesday evening.

A Liam McLarnon goal had put the hosts in the driving seat early on and St Paul’s held a narrow advantage at the break. Four unanswered points at the beginning of the second period increased St Pauls’ lead, but St Teresa’s grew into the game in the final quarter of an hour and a Niall McCann penalty and free from John Mallon had the game tied at 1-8 apiece going down the home straight.

But Paddy Linden’s side registered the final three points of the game to make it back-to-back Championship victories, as last year’s beaten semi-finalists look on track to make a top-two finish in the group.

Both sides had claimed weekend victories over St Pat’s, Lisburn and Rasharkin respectively ahead of the first competitive midweek game of the season.

St Teresa’s were first to register through a converted John Mallon free but St Paul’s hit straight back with the opening goal of the game as Liam McLarnon got on the end of a high ball over the top and showed composure with a neat finish to the corner of the net past Simon Harney to give his side a 1-0 to 0-1 lead.

St Teresa’s almost responded with a goal of their own a few minutes later but Kiefer Toolan was on hand to turn away Joseph Rainey’s dangerous effort after Anton Taylor had slipped the full-forward in on goal.

Conor Burns extended his side’s lead at the other end, but Mark Small responded after John Mallon’s short free to Anton Taylor came off the large post.

Colm McLarnon and Conor Burns nailed back-to-back frees with Niall McCann replying from the same scenario after his side claimed a forward mark.

A further point followed from the visitors, courtesy of Paul Curran who was alert to a wayward kick-out from Toolan and opted for a point.

St Teresa’s were in the ascendancy and a terrific angled point from Niall McCann ensured that just two points separated the sides at the break.

St Paul’s made a bright start to the second period with Conor Burns adding a further two scores: a fine point from play and a converted free.

Liam McLarnon saw his shot deflected over the bar for a point and a converted free from younger sibling Colm had St Paul’s 1-8 to 0-5 ahead approaching the midway point in the second-half.

St Teresa’s first score of the second period came courtesy of a Niall McCann 45 and John Mallon converted his second free of the evening in the aftermath.

The visitors had caused St Paul’s a few hairy moments from the high ball into the area and with little under 10 minutes remaining, referee Danny O’Neill spotted an infringement in front of the St Paul’s defensive third and signalled for a penalty.

Niall McCann seized responsibility and sent Toolan the wrong way to net a goal that reduced arrears to the bare minimum.

The sides were tied at 1-8 apiece a few minutes later as John Mallon kept his cool to pop over his third free of the contest.

St Paul’s didn’t panic, however, and nudged themselves back in front as Conor Burns lay-off to substitute Mick Connolly was popped over the bar.

Further points from McLarnon brothers Liam and Colm ensured that their side would run out three-point winners.

Both sides are in action again at the weekend as St Paul’s travel to Tír na nÓg hoping to continue their winning start, while St Teresa’s will hope to get back on track but face a tough assessment on the road to Ballymena.