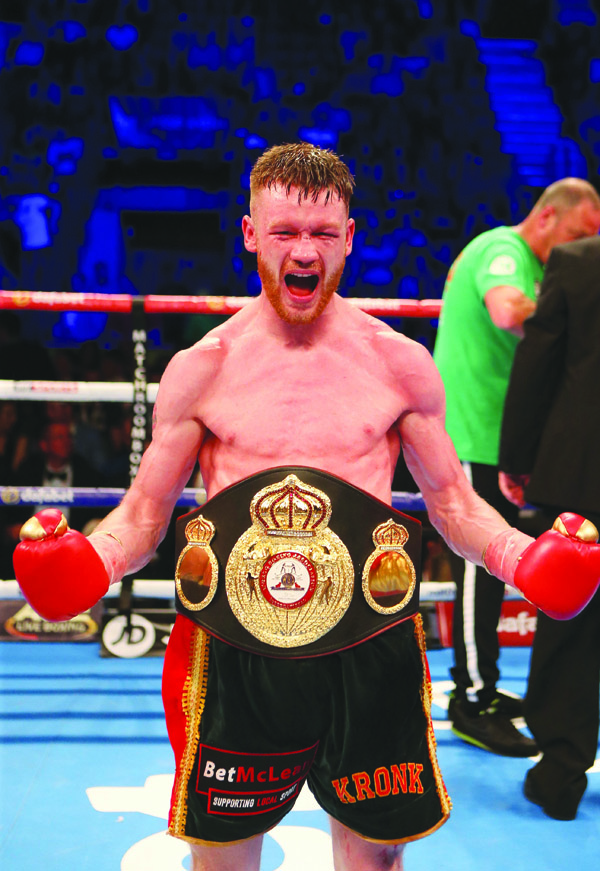 JAMES Tennyson burst into the world rankings on Saturday night at the SSE Arena as he forced Ryan Doyle to be pulled out after six rounds of the WBA International super-featherweight title fight.

This was a highly entertaining scrap that came alive from the opening bell with both men planting their feet and letting solid right hands go with regularity.

Tennyson probably shaded the opener, but Doyle came out strongly in the second, peppering the Poleglass man with jabs before unleashing hooks to the body and head.

Tennyson was looking to get his uppercut in play as both men banged away on the inside.

The third round most certainly went the way of Doyle who was backing Tennyson up with his body shots and it appeared the West Belfast man was hanging on somewhat as the bell sounded.

This assault appeared to take something out of Doyle whose energy levels were evidently much lower in the fourth as Tennyson steadied and began to get his power shots off again.

By the fifth, the pendulum had decisively swung in favour of Tennyson who landed a body shot that stung the Mancunian and he began to get his uppercuts off.

Midway through the sixth it was clear Doyle was virtually spent as his corner seemed to be contemplating throwing in the towel as Tennyson went to work, jolting their man’s head with powerful uppercuts as he began to sag onto the ropes. Bravely he tried to respond and keep himself in the contest, but it was clear he had little left and his corner decided enough was enough at the end of the round as Tennyson celebrated victory after a thrilling six rounds.

“It was a tough fight. I couldn't have asked for a better opponent,” said the 23 year-old Tennyson after.

“The crowd loved it so it was excellent. He was a tough opponent and gave as good as he was getting.

“I felt my shots getting through. He was easing off so I knew it was coming. My uppercuts have always been one of my main punches and they were landing lovely. I have a lovely belt around me now so I can't complain.

“I'm highly ranked now with the WBA after two good wins, so we will see what the future holds.”

Padraig McCrory enjoyed a successful debut on the night as the St James’ super-middleweight scored a 40-35 points win over Jacob Lucas.

McCrory sent the Englishman to the canvas at the end of the first round when stepping back and landing a crisp right, but the bell saved Lucas.

The West Belfast man did go looking to stop to fight in the following rounds, but Lucas used his survival skills to see the final bell although there was no doubting the victor as McCrory was awarded a 40-35 points win.

“Once I put him down in the first round, I was a bit disappointed not to get the stoppage in the second, third or fourth,” he said.

“The bell saved him, but he got up and recovered well. He was pretty negative, but I think I have learned a lot from the four rounds.”

Another debutant, Sean Magee did find the stoppage when he blasted out Jules Phillips in the first round of their featherweight clash.

Elsewhere on the card, Luke Watkins took the Irish cruiserweight title with a fourth round knockout win over Ian Tims, while another cruiserweight, Mike Perez took just 29 seconds to stop the over-matched Viktor Biscak.

Tyrone McCullagh improved to 7-0 as the Derry featherweight out-pointed Jose Aguilar (40-36), while Matthew Wilton was a comfortable points winner (60-54) over William Warburton at welterweight.

Coalisland’s Feargal McCrory agains impressed as he scored a second round knockout win over Paul Holt, while Welshman, Sean McGoldrick was a points winner over Ricky Starkey.