Tennyson hoping for a happier ending to push into title mix 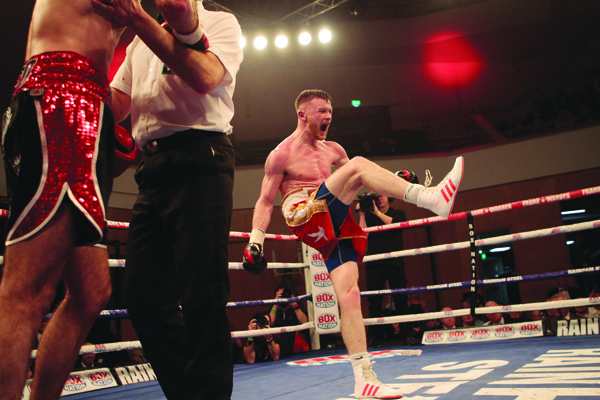 IT was October 2013 when James Tennyson last appeared at the Odyssey – now SSE – Arena, but it was certainly a night to forget for the Poleglass banger.

The-then 20 year-old marched to the ring with an 8-0 record and was expected to make light work of Latvian journeyman, Pavels Senkovs as the early arrivers trickled in for Carl Frampton’s European title defence against Jeremy Parodi.

However, a looping right shook Tennyson and his corner was forced to throw the towel, two rounds into the bout. It wasn’t supposed to be that way, but on Saturday, he returns to the scene of the crime intending to banish that memory when he takes on Ryan Doyle for the WBA International super-featherweight title.

“I was knocked out that night, but it was early on in my career,” he recalls.

“I’m here to get my first win at the Odyseey this time and I want to make it a good one at that.

There has been a lot of water under the bridge for ‘The Assassin’ since then as he claimed the Celtic featherweight title before suffering his second defeat when challenging Ryan Walsh for the British title in April 2016.

Tennyson put that defeat down to weight issues and has moved up to super-featherweight since where he says he is much more comfortable.

“Moving up to super-featherweight is about building myself back up and getting my career back to where it was, only in the weight above,” he explains.

“This is just about making progress now.”

He has already won a title at his new weight, stopping Dubliner, Declan Geraghty at the Waterfront Hall in the sixth round of the Irish title showdown back in March where his power proved to be the decisive factor to help him improve to 18-2.

“I’m still buzzing about that fight,” he said.

“Every time I think about it, the excitement kicks in of how the fight went so hopefully next week I can build from that win and keep it going.”

Saturday’s opponent, Doyle is a late replacement for Ben Jones and appears to be a tougher task.

The Mancunian comes to Belfast with a record of 14-1-1, his defeat coming at the hands of Ian Bailey he since avenged with the draw coming in an English title fight against Isaac Lowe who stopped Marc McCullough at the Manchester Arena last year.

Tennyson defeated Bailey back in 2014 and the pair actually have several opponents in common with the West Belfast man perhaps more impressive in his victories.

Still, a late change in opponent can be unsettling although Tennyson is happy to get on with it and force a win that can move him into the world rankings with the WBA.

“I believe I’m beyond Irish title level. I’m not going to gain or learn much more at that level or by boxing journeyman. I’ve gone through that now,” he agreed.

“This is a fight that I needed and help bring my career to the next level.

“I’ve watched Ryan and this is going to be a really entertaining match up. With the WBA International title on the line, it gives it a little more spice.

“Usually I don’t look too much into my opponents, I get in there and take it as it comes. I’m confident in my own ability to get the job done.

“My team already know a bit about the boy so they are telling me the plans which we’ll adopt on the night.

“I’ve prepared for a tough fight no matter what so the late change of opponent doesn’t really change all that much for my planning.

“It’s all work in progress. I want to get to world level. This is a great stepping stone to help get where I want to be.

The opportunity to appear live on TV is one that all boxers aspire to in order to expand their fan-base and Tennyson is no different. This will be his first outing on Sky and he believes a good victory can lead to big things.

“I have a great opportunity here, live on Sky Sports and that’s the perfect chance for me to get my face out there, to get more recognition and let people see what I can do,” he agreed.

“This is a change now from BoxNation to Sky Sports, so it’s a great opportunity in front of a new audience. A good win on the night could open doors for me.”