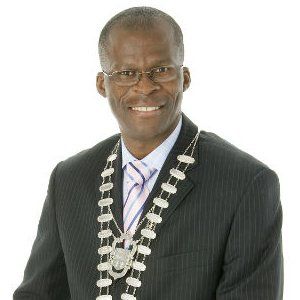 PIONEER: Rotimi Adebari made history when he was elected Mayor of Portlaoise

WILL Northern Ireland rise up to the occasion and do what the South has done not once, not twice, not three times, but four times?

Rotimi Adebari was the first non-white person to take a Mayoral position when he become the First Citizen of  Portlaoise in 2007. He first stood for office in 2004 as an independent and, to the surprise of many, got elected. Some would argue that Rotimi’s political asylum status brought the voters close to him asthe Irish are well known for that bit of empathy.

Just in case anyone is wondering why Covid-19 continues to spread like no man's business:
The attached image speaks volumes about our Covid-19 preventive measures.
With scenes like this, is the world ever going to be free of this virus? @WHO @EUnionCouncil @HSELive @NHSuk pic.twitter.com/dFdoQ8xoCz

During the late 1990s, Ireland implemented a migration policy of welcoming asylum seekers from around the world. Up to 30,000 were integrated into Irish society and it was not a surprise that some like Rotimi were openly investing their resources in grassroots politics. Most of the new citizens were inducted in this programme were originally from West Africa, particularly Nigeria. Ireland started experiencing a shift in its inward-looking politics.

People seemed to want to know more about their new neighbours from Africa and were therefore willing to work with them inside the new political framework of the country.

Nigerian-born Doctor Taiwo Matthew was also elected when he stood for a Council seat in Ennis as an  independent in 2003. Nearly twenty years later, Uruemu Adejinmi, a Fianna Fáil politician, was elected to Longford Council. Then followed Yemi Adenuga, who became the first black female Councillor in the Republic of Ireland.

She was elected to Meath County Council on the Fine Gael ticket.

Currently, out of 949 Councillors in the South, only two are black African, but a small number is better than nothing. Tánaiste and former Taoiseach Leo Varadkar is notable for his Indian Irish background at the high table of Irish politics.

Ethnic representation in the politics of any place is more than relevant. It leads to a society full of confidence, one that makes ‘others’ accepted, particularly in societies that have suffered long conflicts. About two years ago, this column delivered an essay about the necessity of affirmative action in the public and private sector. It is right to demand affirmative action for all disadvantaged groups: women, minority groups, people living with disabilities and many others who feel excluded.

Here in the North, during the 2011 Assembly elections, Anna Lo topped the poll with 6,390 votes first preference votes. This really demonstrated the liberal tendencies of the voters of South Belfast in choosing a candidate from an ethnic minority community to represent people at the Stormont parliament.

The minimum wage should be reviewed. It is in a bad place and should be raised for any hope for society to achieve their human rights. The right to a fair wage is a basic human right. Ask yourself, why corporate giants pay their top executives six-figure sums. Or let us open this discussion further: is it okay for a top football player to earn half a million per month?

Yes, we live in a seriously capitalist market which allows such things to happen. In my opinion, the minimum wage should be increased to and government can foot this bill by working with employers to address this problem.