The time was right to retire says Cliftonville captain McMullan 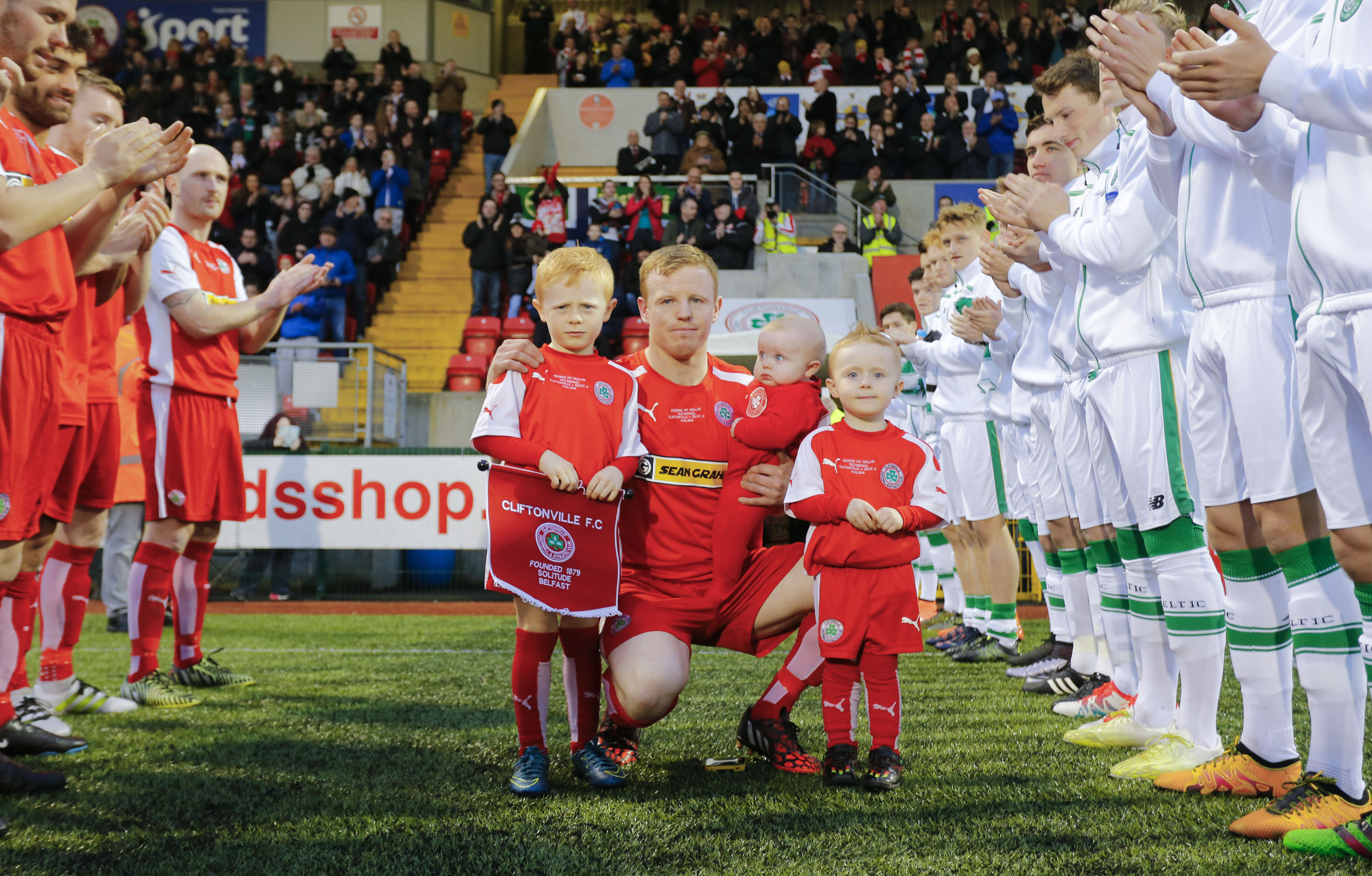 Cliftonville’s George McMullan pictured before his testimonial game against Celtic at Solitude last month. The Reds legend announced his retirement from the game last week and says the ‘the time is right’ to bow out

ALWAYS leave them wanting more. That mantra might well have been on the mind of George McMullan as he pondered his Cliftonville future over the past number of weeks.

When news of the Irish League legend’s retirement broke last week, many expressed their opinion on social media that McMullan could and should have continued on for another season.
A one-year extension was on the table from Cliftonville.

Yet, McMullan wanted to bow out on his terms before injuries took their toll or before his place on the first 11 was in doubt.
A dramatic 3-2 play-off win over Glentoran to secure a place in next season’s Europa League was, perhaps, the fitting end to a remarkable career.

However, McMullan revealed that he would have played on for one more year if the Reds had failed to secure European football for next season.

“What made up my mind was probably the way the season ended more than anything else,” said McMullan.

“We were looking forward to trying to qualify for Europe. If we have had got beaten by Glentoran, it wouldn’t have been a great season and a great ending so I probably would have soldiered on for another season.

“I wouldn’t have walked away after a bad end to the season. I always said I wanted to walk away from the club feeling good and being in good spirits with everybody at the club.
“Cliftonville offered me another year. I went away and thought about it and discussed it with my wife.

“I don’t doubt that I would have another year or two in me. It is one of those things, it just feels right to make my mind up now to hang my boots up.”

McMullan retires as Cliftonville’s most decorated player.
He guided the Reds to back-to-back league titles in 2013 and 2014 and also won five League Cups and four Co Antrim Shield titles.

While an Irish Cup eluded McMullan and Cliftonville, he sealed his place in the club’s folklore with a nerveless injury-time penalty against Linfield to defeat the Blues 3-2 at Solitude and end a 15-year wait for the Gibson Cup in 2013.

The strike didn’t just seal the title, it signalled a changing of the guard in local football. Cliftonville would go on to prove they were no flash in the pan by retaining the title 12 months later.

“That moment against Linfield will live long in the memory for me and I know it does for the fans,” reflected McMullan.
“After last week, I got a lot of posts on social media. It was nice to be able to play a part in Cliftonville’s history.

“It is a great club - I loved playing for them. It was a very tough decision to make.”

During McMullan’s stellar 15-year career at the North Belfast club, players and managers came and went but the midfield maestro stayed loyal to the Reds.
However, he revealed he turned down an offer to join a rival club earlier in his playing days and stated that the incident made him realise his future lay at Solitude.

“Things weren’t always rosy in the garden. We used to always be mid-table when I came on board,” added McMullan.
“On one occasion, I was contacted by the manger and the chairman of another club about me signing.

“The chairman sent me a message saying ‘you would be better coming here because you’d have a better chance of winning a league title’ and that’s when it sunk in.
“I didn’t want to win league titles at his club, I wanted to win them at my club.

“That text made my mind up and, from then on in, there was never any chance of me leaving the club.
“It was a good wake-up call for me and it made me even more determined to win things at Cliftonville.”

While McMullan bows out as a two-time Irish League winner, the Reds failed to mount a serious title challenge this season as their North Belfast rivals Crusaders retained the Gibson Cup with ease.

Prior to McMullan announcing his retirement, the club revealed that Marc Smyth, Johnny Flynn and Paul George will leave this summer while Ciaran Murray and Caoimhin Bonner have been transfer-listed.

That all leaves Gerard Lyttle with a massive rebuilding job on his hands – especially now that his captain has retired but McMullan believes the Reds boss is the right man for the job.
“A few players have left the club and there might be a few more leaving and I have retired,” said McMullan.

“I think there will be a bit of a rebuilding process for Gerard (Lyttle).

“I think it could be the best thing that happens because he can rebuild a team that will play for him and it will be a good challenge for him.”

As for what lies ahead for Cliftonville’s iconic talisman, McMullan revealed that a coaching role with the Reds is something that would interest him in the near future.
For now, McMullan is looking forward to taking his sons, Cillian and Ruairi to Solitude to watch his beloved Cliftonville next season.

“It (coaching) is something that I am now starting to think about. I was talking to the chairman (Gerard Lawlor) about taking up some sort of role in the club, being involved some way,” said the 35-year-old midfielder.

“I’ll have to speak to the manager and see he if he wants me involved.
“I would still like to be involved some way. If not, I’ll still be coming down to support the boys.

“I’ll probably still be arriving for games at half one. Pre-season starts in a couple of weeks and I’ll be sitting in the house, twiddling my thumbs wondering ‘what am I doing’ but that is the decision I have made.

“I am looking forward to brining my two boys down and enjoying the other side of the game.
“Hopefully the results go our way this year and the gaffer gets a good squad behind him.

“I’ll probably be kicking every ball and shouting and effing and blinding. Don’t get me wrong, I’ll miss it like mad.”

No doubt the Cliftonville fans will miss their inspirational captain and much as he will miss them and the Irish League will be all the poorer next year without George McMullan - a player who always left them wanting more.