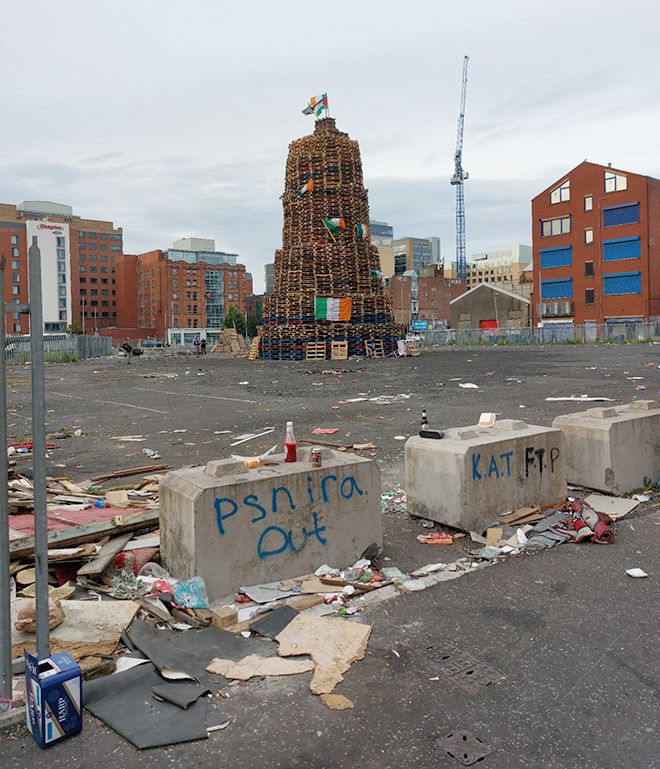 “IRISH media must stop reporting the Twelfth like they are reporting on a different species.” So ran the headline of a feature in this week’s Belfast Telegraph, after a Twelfth week that we’ve been repeatedly assured by the, ah, Irish media, was one of the quietest for years.

The trouble with the Twelfth, of course, is that it’s not just the Twelfth. It’s the long, dreary months from spring to the Eleventh Night when we watch the bonfires going up with kids lounging around them on stained mattresses and old sofas. It’s the flags going up every day after April at interfaces, at new housing estates where Taigs might be tempted to live, outside Catholic schools and churches. It’s the UDA and the UVF visiting businesses seeking money for band uniforms and instruments.

For years he’s been attending not only Twelfth parades, he’s been shoulder-to-shoulder with the drinkers in the Scarva demesne, the blue bag divisions in East Belfast and, yes, he’s been among the heaving mass of booze-soaked humanity in Sandy Row who believe a 24-hour rave is a central part of loyalist culture.

This year when Squinter talked to friends and colleagues about attending Sandy Row in the evening he got the familiar response: ‘Are you mad?’ Far from it. Fair enough, if Squinter went in a Celtic shirt carrying a Papal flag it’s likely to get hairy. But the depressing – and for a Falls Road Fenian deeply comforting – fact is that every person there is too far gone to give a fig about who’s who. It’s like a Happy Mondays gig with union jacks and WKD. The following goes completely unsaid in the Irish media – Dublin and Belfast – but Sandy Row on the Eleventh and Twelfth is a complete madhouse. The towering inferno beside the Holiday Inn is described online by loyalists as the ‘South Belfast Cultural Bonfire’. But Sandy Row over the Twelfth has about as much to do with unionist or loyalist culture as a shopping trolley in a canal. The place is filthy. The drinking is Homeric. The lack of order and control complete. If you’re a unionist, Protestant or Orangeman reading this, don’t take Squinter’s word for it – go along next year.

• Ah, so BBC Ulster can do pronunciation, can they?

THE fleeing of Sri Lankan President Gotabaya Rajapaksa amidst growing civil unrest over the country’s economic woes proved a challenge for the news readers of BBC Ulster. So too did the elevation of Prime Minister Ranil Wickremesinghe to the post of Acting President. But it was a challenge to which they rose with admirable professionalism and dexterity.

And doubtless if further changes are made at the top of government in Sri Lanka, they will similarly rise to the challenge of pronouncing Susil Premajayantha, for instance, or Wijeyadasa Rajapakshe or Vidura Wickremanayake. Just as their sports department colleagues across the water effortlessly roll out the names of Sri Lankan cricket players such as Lasith Embuldeniya, Harsitha Samarawickrama and Danushka Gunathilaka.

But if the success of our Ormeau Avenue on-air talent in wrapping their mouths around Sri Lankan names was inspiring confirmation that Auntie Beeb still demands high standards, it also raised further questions about why a similar standard of accuracy and commitment is not required – or supplied – when it comes to Irish names. It was only two weeks ago that Squinter penned an open letter to BBC the Province head buck cat Adam Smyth, asking why news readers and presenters struggle so badly with Irish names. It is Squinter’s sad duty to report that so far no reply has been forthcoming from Mr Smyth, but the subsequent dramatic events in Sri Lanka removed any doubt that there’s a lack of pronunciatory talent in Ormeau Avenue. Which leaves Squinter to suppose that the fall in professional standards when it comes to saying Irish names properly can most likely be ascribed to indifference, laziness, or a mixture of the two.

Of course, mistakes in pronunciation – or refusals to take the trouble to learn correct pronunciation – can only be put right by management if the brass listening in can themselves pronounce Irish names correctly. Squinter has no idea of what level of proficiency – if any – in the Irish language Mr Smyth or any of his management colleagues have attained. When a news reader makes an absolute hames of Niall Ó Donnghaile’s name, as is so often the case, it’s clearly the case that only someone who has taken the trouble to familiarise themselves with it can spot the problem. All we know for sure is that, between them, BBC broadcasters and management continue to struggle with the native language of the land in which they are working. And whatever language you want to say it in, that’s muy ridiculoso.

• Mop your brow and sing us a Christmas carol

30 DEGREES in the shade and Squinter retreats from the baking heat of the garden to the relative cool of the living room for a lie-down on the settee. The TV’s on low in the background and as Squinter stretches out and mops his brow, dull and familiar clips from daytime ads puncture the hot afternoon stillness. Life insurance for the over-50s; £2 a month to save a donkey; cruises on the Rhine; funeral plans; Christmas trees.
Wait. What? Christmas trees?

Squinter sits up, puts on his glasses, grabs the remote and turns up the sound. And, yep, there it is. Three generations of an affluent and smilingly handsome family in a tastefully furnished living room warmly lit by softly blinking festive lights. The centrepiece of this cheerful domestic Yuletide tableau is a richly decorated Christmas tree enveloping grand-parents, parents and children in its comforting glow.

“This Christmas, create magical moments at the flick of a switch,” Squinter hears. “Made with craftsmanship you’ll enjoy for years to come.  Handstrung lights that add a twinkle to your festivities and true needle foliage that looks stunningly lifelike. Make it your own. Have a happier Christmas with free delivery at Balsam Hill.co.uk.”

Squinter clicked off the television and sank back into the settee. A fat bumble bee buzzed lazily against the window, the tarmac on the road outside shimmered dreamily in a heat haze and the smell of barbecued meat mingled with laughter and music from a dozen nearby gardens. Try as he might, Squinter struggled to find the festive spirit on the hottest day in Belfast for years; instead he found himself wondering whether this Balsam Hill Christmas commercial had set a new record for the start of the Christmas festivities.

Regular readers will know that Squinter has written many times about Halloween starting in mid-September, Easter eggs in early January, selection boxes in the supermarkets in mid-September. But an ad for a Christmas tree smack bang in the middle of July? As a life-threatening heatwave blasted Ireland and Britain with Mediterranean temperatures? It’s a bit much to take, especially with the embers of the Eleventh Night bonfires still smouldering and the smoking remains of the effigies of Mary Lou, Michelle and Naomi still proving an attraction in Carrick.