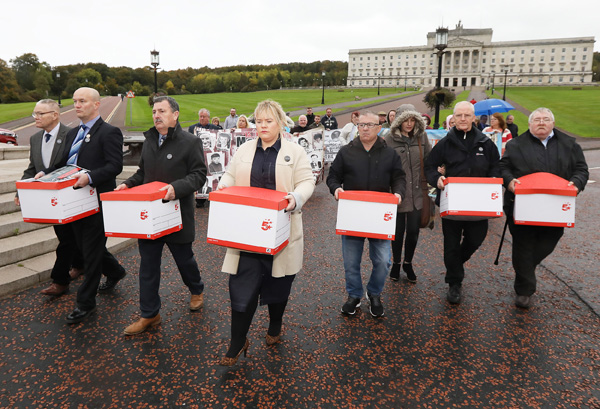 Members of the Time for Truth Campaign hand over 6,000 responses to the NIO’s consultation, addressing the legacy of the past in the North

THE Time for Truth campaign travelled to Stormont yesterday and submitted 6000 responses to the NIO’s consultation, Addressing the Legacy of the Past in the North, during a meeting with NIO Deputy Director Chris Flatt.

Mr Flatt is overseeing the legacy consultation. The campaign also took the opportunity to highlight their campaign objectives: raising awareness of the Time for Truth advice clinics across Belfast on Saturday, September 29 and working to see institutions for dealing with the past up and running.

Campaign spokesman Ciarán MacAirt said: “We were very grateful for the time that the Deputy Director of the NIO took to listen to the families of the Time for Truth campaign. After handing over 6000 responses to the legacy consultation, we discussed how we supported the implementation of the Stormont House Agreement in full and the proper resourcing of the coronial inquest system and Office of Police Ombudsman.”

“We also told Mr Flatt that we planned to gather even more responses before the close of the consultation on 5th of October, especially during the advice clinics we are running across Belfast on Saturday to support any citizens who wish to respond.

“We were also keen to discuss how long after the consultation closes that our families will see the British state’s response to the consultation, its passing of appropriate legislation at Westminster, and the structures in place and working. Although we want to ensure that the work is done properly, unlike it was in the past, families have longer to wait for any prospect of truth and justice under the proposed mechanisms, so the proper resourcing of the legacy inquests and the Office of the Police Ombudsman could help begin the process now. Any other delay will see the families of the Time for Truth campaign take to the streets as we did in February of this year when 7000 victims and survivors, friends and supporters joined our March for Truth.”