Treaty test is a ‘must-win’ for Antrim says Murray 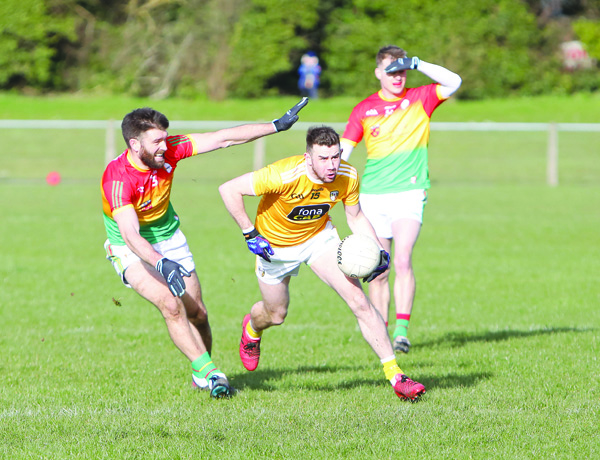 THERE might be three rounds of the Allianz Football Leagues remaining, but Conor Murray insists Antrim must win them all, starting with Limerick on Sunday, if they are to gain promotion.

Last Sunday’s draw at home to Carlow removed the safety net for the Saffrons.

While Limerick top the Division Four standings with four wins from four, they have to face Antrim (third) and Wexford (second) in the next two outings.

There is a chance that the top three sides could all finish on 11 points, provided Limerick and Wexford draw their round six tie, so even three wins wouldn’t necessarily guarantee a top-two berth for Antrim.

Yet, a defeat to Limerick on Sunday, coupled with a win by Wexford over Sligo on Saturday would leave the first two teams in the division clear of the chasing pack.

“If we don’t beat Limerick next weekend, then it could be over for us so we have to win. Limerick and Wexford have to play each other. If we win the rest of our games, it is probably still in our hands.

“In any year, if you want to get promoted, you need to win your home games. We drew with Carlow and Limerick are probably favourites for promotion.

“Over the last couple of years, we’ve finished third and we’ve probably matched the top two who have gone up. We don’t want the same story – it is all going to come down to next Sunday.”

He added: “It probably will come down to the last game as Limerick still have to play ourselves and Wexford and Sligo also play Wexford next weekend.

“We are probably in that battle for second position. We need to get the win over Limerick on Sunday to keep promotion in our hands and not be relying on other results at the tail end of the league. We don’t want to stay in this division for another season.”

Murray was also at a loss to explain Antrim’s lacklustre start to last Sunday’s game with Carlow racing into a 1-3 to no score lead with Sean Gannon bagging the game’s only goal on five minutes.

The home side rallied well to level the game thanks to a late free from Odhran Eastwood, but Antrim also missed opportunities to pinch the win.

“It was a point lost rather than gained, I think,” said Murray.

“In the first 20 minutes, we were dead, lethargic – I don’t know what the story was. We dragged ourselves back into it and then we had chances in the last five minutes. We never got ourselves ahead. I think if we had have got ahead, we could have went on to win by maybe two or three. A few decisions didn’t go our way.

“We didn’t score for almost 15 minutes at the start – you can’t do that at any level.

“In these conditions, it is hard to draw that back, but we did. We usually aren’t that slow starting and it is something we’ll have to talk about this week.”

Murray also hailed the impact made by Eastwood and the returning Michael McCann with both players making their presence felt as Antrim drew level with minutes remaining.

“Odhran (Eastwood) has probably been our best forward in training over this last while. He got his chance today (Sunday) and we showed what he is capable of,” said the Lámh Dhearg clubman.

“Everyone knows what Michael McCann can do. He has been about for years and is probably still Cargin’s main man. Especially playing winter football in Division Four, experience is a big thing as well as holding on to the ball and retaining possession. Mick is a brilliant asset for us.”

Both McCann and Eastwood may see more game-time this Sunday as the Saffrons head to Portglenone for a crunch meeting with Billy Lee’s unbeaten side.

Limerick scored an impressive 5-10 to 1-14 win over Wicklow last Sunday, but suffered back-to-back league defeats at home to Antrim in 2018 and 2019.

Yet, both those games were played in the final round of the league when Limerick’s promotion prospects were already over. Antrim can expect a much tougher test from the Treatymen on Sunday and another slow start could spell the end of their own promotion challenge.