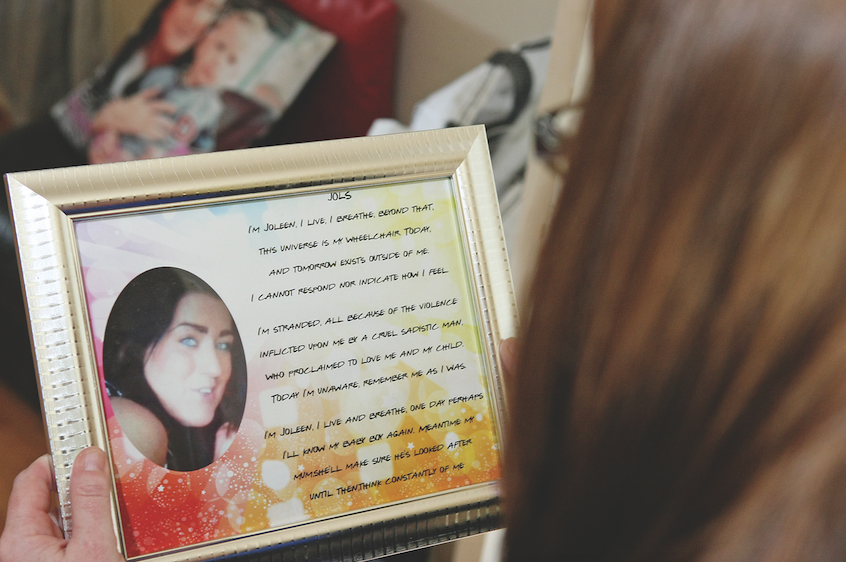 Carol Corr looks at a photograph of her daughter Joleen

TRIBUTES have been paid to West Belfast woman Joleen Corr who passed away in her mother’s arms at a hospice on Thursday morning, almost a year and a half after a violent attack left her in a vegetative state.
The young mother of one passed away at 1.50am yesterday morning at the hospice where she had been for the past 10 days.
Her sister Cherie posted on Facebook: “Our beautiful Joleen Corr passed away peacefully in the arms of her mother and surrounded by loved ones at 1.50am. The exact same time as her cousin Laura. Words will never describe how much we all love her and how much we will miss her. RIP.”
27-year-old Joleen was attacked in her Downpatrick home in December 2016. Last week the High Court ruled that Joleen’s treatment should come to an end.
She spent six months in the neurological unit of the Royal Victoria Hospital before being transferred to Musgrave Park Hospital. On Monday last week she was then transferred to a hospice where she was made comfortable in her remaining days.
In the wake of the landmark ruling her mother, Carol , told the Andersonstown News: “The past 16 months have been a living nightmare for us all, it’s time now for Joleen to have some peace.”
Michael O'Connor, originally from Westrock Grove in the city, has been charged in connection with the attack. He has pleaded not guilty to attempted murder and grievous bodily harm and is currently remanded in custody.