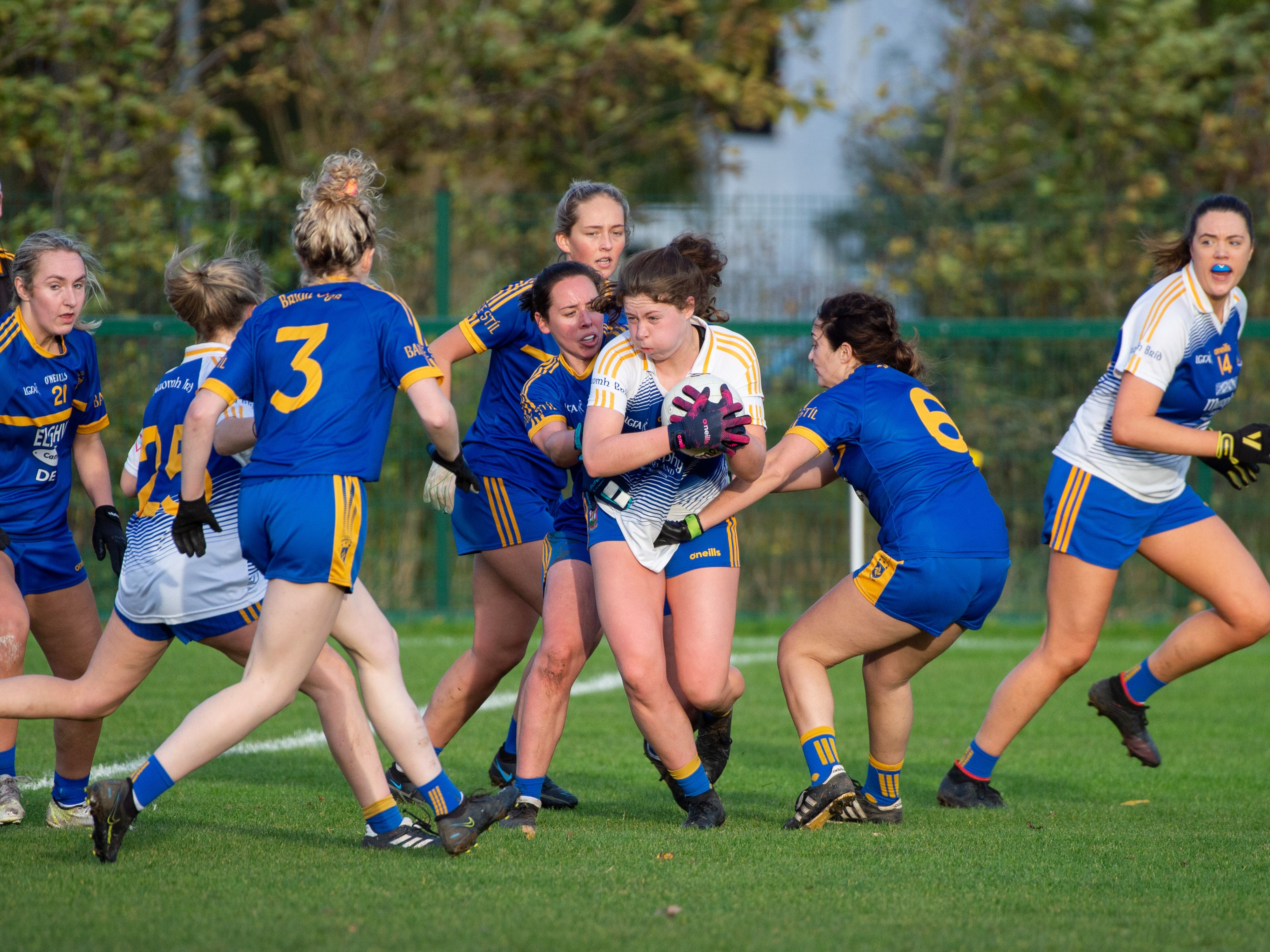 IT was certainly a memorable Saturday for Steelstown Brian Óg and their Ladies’ footballers lived up to their side of the bargain with a comfortable nine-point win over Antrim champions St Brigid’s at Musgrave Park.

Playing with the advantage of a strong wind in the first half, the Derry side built up a 10-point lead at the break with Leah McGonagle’s stunning goal helping her side to a 1-10 to 0-3 lead at the break.

Theresa Mellon scored all but one of her team’s 1-6 tally and her goal on the restart gave the South Belfast outfit a glimmer of hope.

However, a second major for Steelstown from Aoife Collins put the game beyond doubt as the Derry champions booked their place in the Ulster Intermediate decider.

With the men’s footballers also clinching the Derry IFC with a 0-9 to 0-8 win over Greenlough at Ballymaguigan, the Derry City side battling for provincial glory on two fronts in the coming weeks.

In truth, the Steelstown ladies’ weren’t flattered in the slightest by the margin of victory and they found themselves 0-5 to 0-1 ahead at the first water break.

The Antrim ace converted a well-struck free on the restart, but Steelstown were forcing turnovers high up the pitch and their kick passing was outstanding with their full-forward line causing the St Brigid’s defence all sorts of problems.

Back-to-back scores from Sainsbury and McGonagle moved Steelstown five ahead before they struck for their first goal.

McGonagle played a neat one-two with Ciara McGurk before dispatching a wonderfully-placed shot into the top right-hand corner of Julie Curran’s net from 25 metres.

Further points from Sainsbury and Collins left the scoreboard reading 1-9 to 0-2 as the game approached half-time. A foul on Eimear O’Dohery was converted by midfielder Doherty before Mellon landed a much-needed point at the other end to leave St Brigid’s trailing by 10 at the interval.

A late foul by Lea Casey on the cusp of half-time was punished by a yellow card and St Brigid’s made the most of their numerical advantage at the start of the second half.

There was an element of good fortune about their goal as Mellon’s shot across the face of goal caught Ruagin Doherty off guard and the ball nestled in the far corner of the net to cut the gap to seven.

Brian Óg had the chance to reply in kind, but Curran made a fine save to deny McGonagle twice in quick succession and was called into action again to prevent O’Doherty minutes later.

St Brigid’s simply couldn’t break down a well-organised Steelstown defence and, before Casey returned to the fold, they plundered their second goal.

McGeough’s delivery was met by Collins at the back post and Curran was unable to prevent the ball from spilling into the back of the net.

The last quarter of the game saw the Derry champions defend their lead in numbers with St Brigid’s resorting to long, hopeful punts into their full-forward line, but McGurk played the sweeper role to perfection in the second half.

St Brigid’s managed to tag on points from Mellon (two and the industrious Abigail Carleton, but Steelstown had a much greater spread of scorers.

Collins and the excellent Ella Rose Sainsbury added to their side’s tally late on while a late free from McGeough completed the scoring for Steelstown who progress to the Ulster decider against Fermanagh kingpins Kinawley.