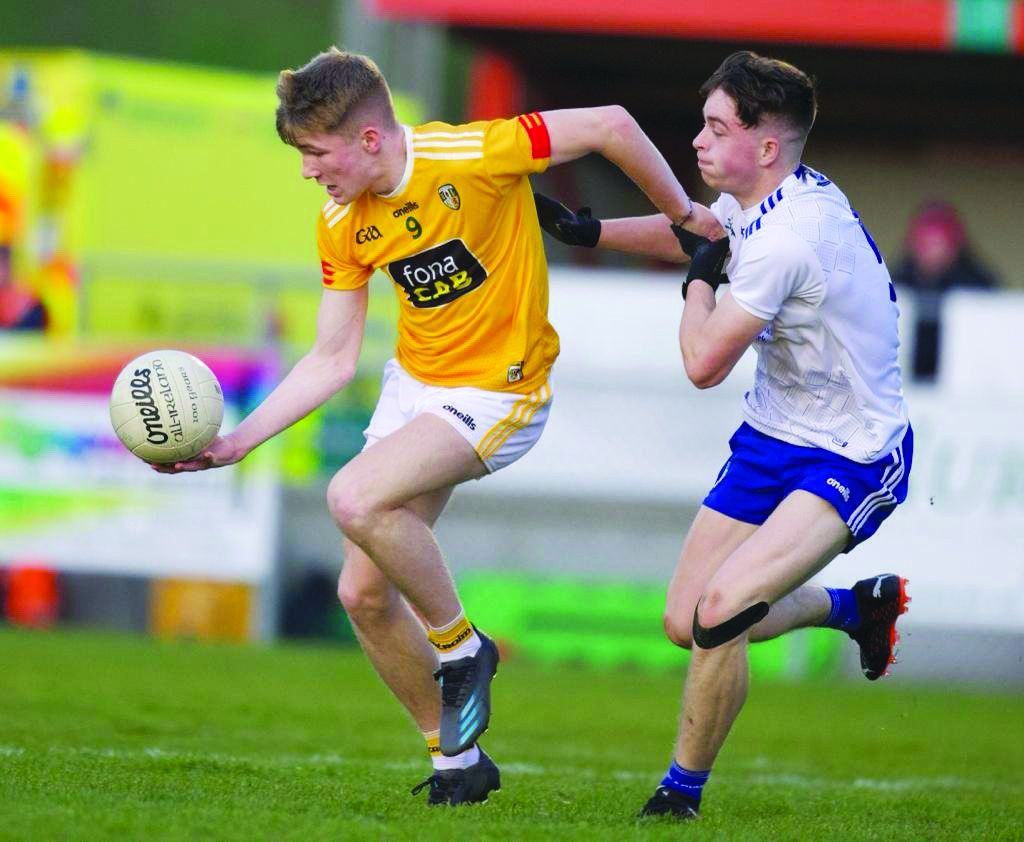 IF Antrim’s minor footballers were something of an unknown quantity, their Ulster MFC quarter-final victory over Monaghan has removed all mystery as they get ready for Saturday’s round two game against Tyrone at Corrigan Park (6pm).

Rank outsiders as they headed to Inniskeen a fortnight ago, the young Saffrons caused a huge shock with a 2-11 to 0-11 win that saw them avoid the qualifying round.

It would be fair to say few outside of the group saw that result coming, especially considering the Farney lads had won quite convincingly in a league meeting between the teams just weeks earlier.

The narrative is similar again this week as Antrim were well beaten by the Red Hands in the league, but knowing what they know now about their ability to raise it when it really matters will give them confidence that they can put it up to the defending champions and who knows, perhaps score another huge win.

“I think the element of surprise is gone, but the truth is that all nine Ulster counties are strong,” said manager Paul McErlane.

“Tyrone are excellent, won the league and are unbeaten. They beat us well at Donaghmore so we know what we’re up against.

“In saying that, Monaghan gave us a stuffing in Belfast and we were able to turn that around, so we’re not afraid of Tyrone by any means.

“We know we have the personnel to win, but it’s about how we play the game will dictate how it goes. The players have proven to themselves they can beat one of the best teams in Ulster.

“Monaghan had been in three of the last four finals and their schools were very strong in Ulster Colleges this year, so we should take confidence from beating them but are taking nothing for granted and know we’re in for a hell of a battle.

“We know how good Tyrone are, have seen it, and know very few teams are able to live with them this year. It’s a challenge, but we go in positively and we’ll do our best.”

Expressing confidence is one thing, but having that self-belief when crossing the white line is another and Antrim proved in their opening round win that have that in spades as it wasn’t just the result, but the manner of victory that proved this group is able to deliver when the lights shine brightest.

They will be tested to the full against a Tyrone side that looked impressive in their 3-17 to 1-15 win over Cavan last week with team captain Eoin McElholm top-scoring with 1-6, while Noah Grimes and Charlie Donnelly also found the net.

Antrim will need to find another gear to get the victory, but McErlane says all can take encouragement from their win over Monaghan.

“Fair play to them on the night as they really showed they could execute a game-plan, had the discipline to pass then they needed to pass, to hold the ball and then shoot when appropriate,” he recalled.

“A lot of the mistakes we made in the league were eradicated. They were very good on the ball, made a lot of good decisions in the second half, but it’s over.

“That was only the first round and it means nothing now, so we’re just focussed on beating Tyrone and preparing for that game.”

McErlane expects to have a clean bill of health this weekend and indeed, will have Ben McLarnon and Niall McKenna back after they missed the Farney clash.

That will give him further options and create further competition for places this week, which is no bad thing for a group that has been planning and preparing for this campaign since last year.

In years gone by, Antrim teams may have been found wanting in terms of their preparation, but things are changing in the Saffron county with proper programmes in place in both codes that is beginning to show the start of an upward curve.

Saturday is perhaps the ultimate test, but Antrim will have no fears and go in with their own plans, hoping to execute and take another scalp that would be a massive boost to football in the county.

“We’ve done a lot of work since last October, been out at least three times per week, so that was six months of hard work,” McErlane outlined.

“Our strength and conditioning coach, Thomas Rogan, has got them into great shape and the coaching from Niall Enright and Matthew Gribbin has been top-drawer stuff.

“What all counties have to work on and what some are further ahead of than others is the development pathway.

“We are talking elite athletic development, a different world playing at county level now. If these kids want to play senior county football, they have to virtually be professional athletes and that’s where they are across the country.

“If you look at what the county has done in football and hurling, particularly with the minors, U20s and seniors, we are already making massive progress.

“We need to keep building on that but you can see the benefits the other counties are doing and we just have to do it too.”