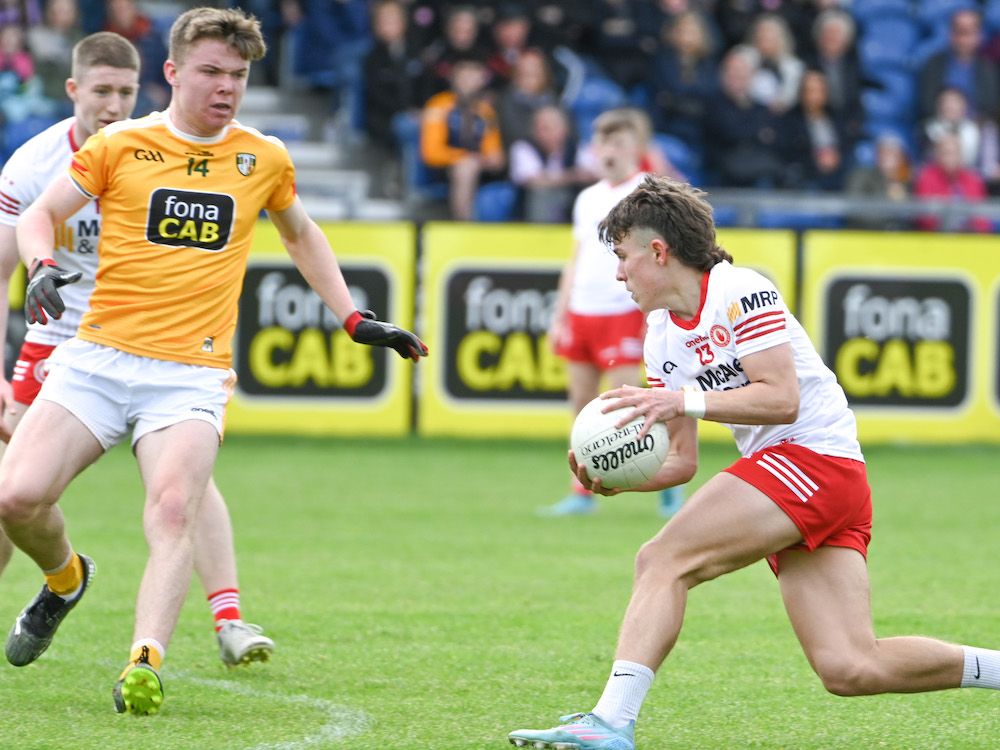 ANTRIM'S hopes of causing another shock in the Ulster Minor Football Championship were ruthlessly denied by a rampant Tyrone side at Corrigan Park on Saturday evening.

The Red Hands started and ended the first half well to build what was all but a match-winning tally by the break, but there was no let-up in the second period as they bagged a trio to majors to underline their dominance.

In Noah Grimes, they had a forward who caused the hosts all sorts of problems as each time the Donaghmore man got on the ball, the Antrim defence was under pressure with his speed, trickery and eye for a pass or score.

Yet Tyrone had stars throughout the field as their defence was disciplined and gave Antrim nothing easy, challenging well and putting the blocks in, while they controlled the middle with Conor O'Neill and Ronan. Molloy impressive.

Antrim will be disappointed with how they performed as there were just too many errors with passes going astray and some overambitious that were mopped up by Tyrone who could break on them, but Paul McErmane's young charges must regather for a Round Three qualifier against Cavan next weekend (day, time and venue to be confirmed).

"We made some basic errors we didn't against Monaghan and did things we haven't done that played into Tyrone's hands," said the Antrim manager.

"If you analyse the first half, it was mostly our mistakes where Tyrone got their scores. We've been talking about reducing our error count forever and managed to do that against Monaghan, but didn't tonight and Tyrone capitalised.

"It was 9-2 at half-time but five or six of their scores came from our mistakes. We were doing reasonably well (in the first half) but we were a bit nervous and I think playing in Corrigan heightened expectations for the lads, so it was difficult.

"Tyrone is a good team, but we are a good time and have to pick ourselves up and make sure we are ready for next week as that was a disappointing performance tonight."

Antrim would really have liked to make a good start to sow some seeds of doubt in the favourites, but as it was, the Red Hands came flying out of the traps with the star of the show, Noah Grimes claiming and converting a mark after 27 seconds.

Charlie Donnelly pointed a 45 straight after and on four minutes, Donnelly had a rather bizarre point when Conan Devin send in a teasing ball that he rode to meet but his palmed effort came off the crossbar and rebounded off just over the bar.

Grimes then tagged on a free and Cian McAleese cut through the Antrim defence to put the visitors five up on eight minutes.

It looked like this could really get away from Antrim before they started, but to their credit, the hosts worked their way into the game although they would get nothing easy as Tyrone tackled well and forced turnovers.

The Saffrons were finally off the mark on 13 minutes as Ciaran McAleese shot under pressure with his effort dropping over.

On 16 minutes they had a chance for a goal that really would have ignited their challenge, but Conor Devlin made a vital block on Conhuir Johnson and from the rebound, Conor McAneney saved low from McAleese's follow-up.

A Rory McErlane point from a mark left a goal between them, but Tyrone just upped it a gear with Caolan Donnelly finishing a well-worked move before late points from Ronan Molloy, Michael McElhatton and a Noah Grimes free gave Tyrone a fairly handsome 0-9 to 0-2 lead at the half.

If Antrim had hopes of getting back into this game, they were extinguished within two minutes of the resumption as Tyrone got on the front foot, moved the ball through the hands with Conor O'Neill jinking onto his left and sending a rasping shot past the outstretched arms of Jamie McLaughlin and into the top right corner of the net.

Grimes added a point from a free and Eoin McElhatton added another off a break to stretch the lead further before Antrim had their first score of the second period through Tarlach Enright.

Points were not going to be enough for the Saffrons, but even they were not to be plentiful as Tyrone kept their foot on the gas with Grimes landing another free and then the effervescent forward got out in front yet again and this time, pinged a beauty of a pass into Caolan Donnelly who was through to finish to the net, leaving it 2-12 to 0-3 midway through the second period.

Antrim had a chance of a goal soon after but Conhuir Johnson was off-target, while Tyrone has no such issues with their next attack as substitute Ruairi McCullagh claimed a mark with his first tough since being introduced and sent it between the posts.

Ciaran McAleese did hit back with one for the hosts, but the momentum was with Tyrone and as things went from bad to worse for Antrim with Niall Hynds sent to the sin bin on 51 minutes.

Tyrone would finish the game strong with substitute Sheehan Fay, Eoin McElholm and Ruairi McCullagh pointing before they struck for a third goal on 60 minutes as a quick free from Michael McElhatton into McCullagh was returned and McElhatton steadied and fired low to the net.

Conhuir Johnson and Con Sweeney would trade stoppage time points, but the issue had long since been decided as Tyrone marched into the semi-finals and Antrim drop into the qualifiers for a meeting with Cavan this weekend.

"Any luck we were going to get, we didn't get," McErlane reflected on that first-half goal chance that had the potential to change the dynamic of the game had it gone in.

"Before they scored their third goal, we were in for a good chance but the bottom line is the better team won tonight and won convincingly. We are a good team but what we have to do now is demonstrate that next week.

"Everything from now is about preparing for next week as the game is over and there's nothing we can do about it. We'll analyse it on Tuesday night to look at our mistakes because there were a lot that were unforced and that's something we have to work on."