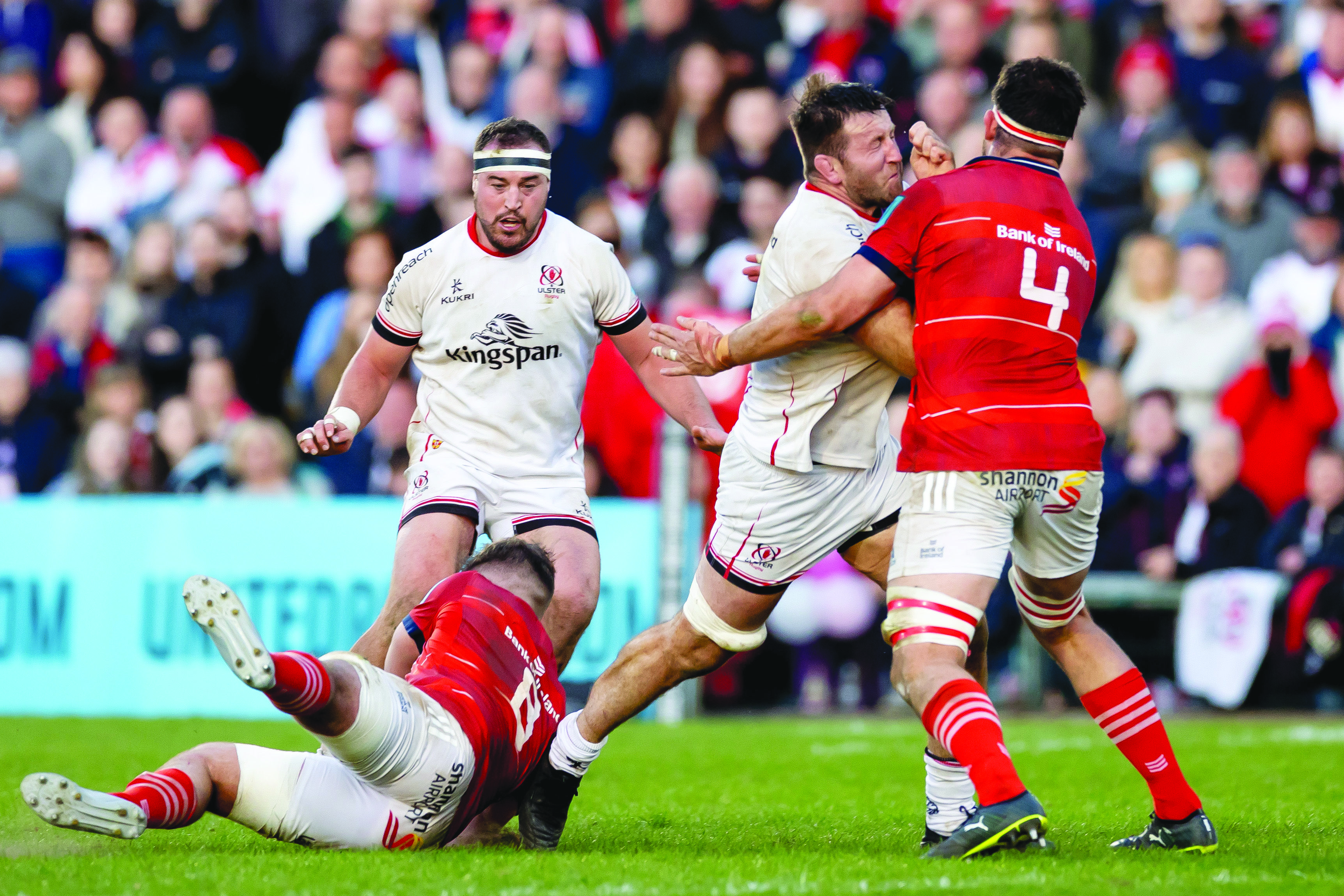 Ulster's Rob Herring, pictured against Munster in April (left, standing) is expecting another tough test against their Irish rivals INPHO

IT’S the final straight in the United Rugby Championship with the eighth remaining clubs three wins from the title and on Friday at the Kingspan Stadium, Ulster and Munster will battle it out to remain in the hunt from silverware.

Dan McFarland’s side will enjoy home advantage due to their sixth-place finish in the regular season to Munster’s sixth, but travelling to Belfast won’t be an issue for Johann Van Graan’s men who scored a 24-17 victory at the same venue in April before edging home in the corresponding fixture in Limerick at the start of the year.

Therefore, Ulster will be hoping third time is a charm against their Irish rivals as they bid to stay in the hunt for a first trophy since 2006.

The April defeat against Munster was their fourth in five games during a time that also saw them exit Europe, but a pair of victories against Edinburgh and the Sharks appears to have steadied the ship and after having a break last weekend as the European finals were played, hooker Rob Herring believes they will enter this week’s derby refreshed and ready to go.

“At this stage of the season, you can enjoy a week off for a bit of a breather,” he said.

“At the same time, it gives you extra time to prepare. It’s a time to refresh the bodies and come back – particularly against the Sharks, we knew the physical elements of the game they bring.

“It’s going to be the same this weekend. I was feeling it after the Sharks game, so I’m glad there’s a weekend off to re-group and get back to peak physical levels.”

Your Ulster #URC Quarter-Final team to face @Munsterrugby at Kingspan Stadium tomorrow evening has been named! 🤩

With Ulster and Munster both booking places in the final eight of the URC, Friday night’s game at Kingspan Stadium will most likely serve up a classic Inter-Pro battle between the two sides – not least between the two forward packs.

Munster are expected to welcome back Peter O’Mahony and Tadhg Beirne, while Marty Moore will not play again this season for Ulster with Tom O’Toole a contender to replace him in the front row.

Herring knows he and his team-mates - especially those in the forwards - will need to produce a big game to compete against Munster who are known for their ability up- front.

“It’s part of Munster’s DNA in the way they play,” Herring remarks.

“When they came here last time, it was a good battle and the players they have particularly around jackalling and getting turnovers off the ball, they’re the best in the league at it. They’re right up there in terms of their maul as well.

“Of course, the scrum is the backbone of their strengths. For a forward pack, it’s massive for us. We’re going to need to get it right if we want to go through.”

It's Quarter-Final #Gameday in the #URC

Here's your Munster side to face Ulster at Kingspan Stadium at 7.35pm tonight (live on TG4).#ULSvMUN #SUAF 🔴

Munster may have won the game at the Ravenhill venue back in April, but home advantage is still a huge plus for Ulster on Friday night.

Derby games are always extra special and with so much at stake this weekend with the season into ‘win or go home’ territory, Herring is expecting a crackling atmosphere to help push them over the line.

“We have great support here,” he agreed.

“We have fans who come to the stadium, week in, week out. Every team that comes here recognises how great it is to play here.

“We want to be getting knock-out games at home and give that for our supporters. To have that noise behind us is something that we really enjoy doing, getting the crowd behind us. It’s a big motivation for us as well.”