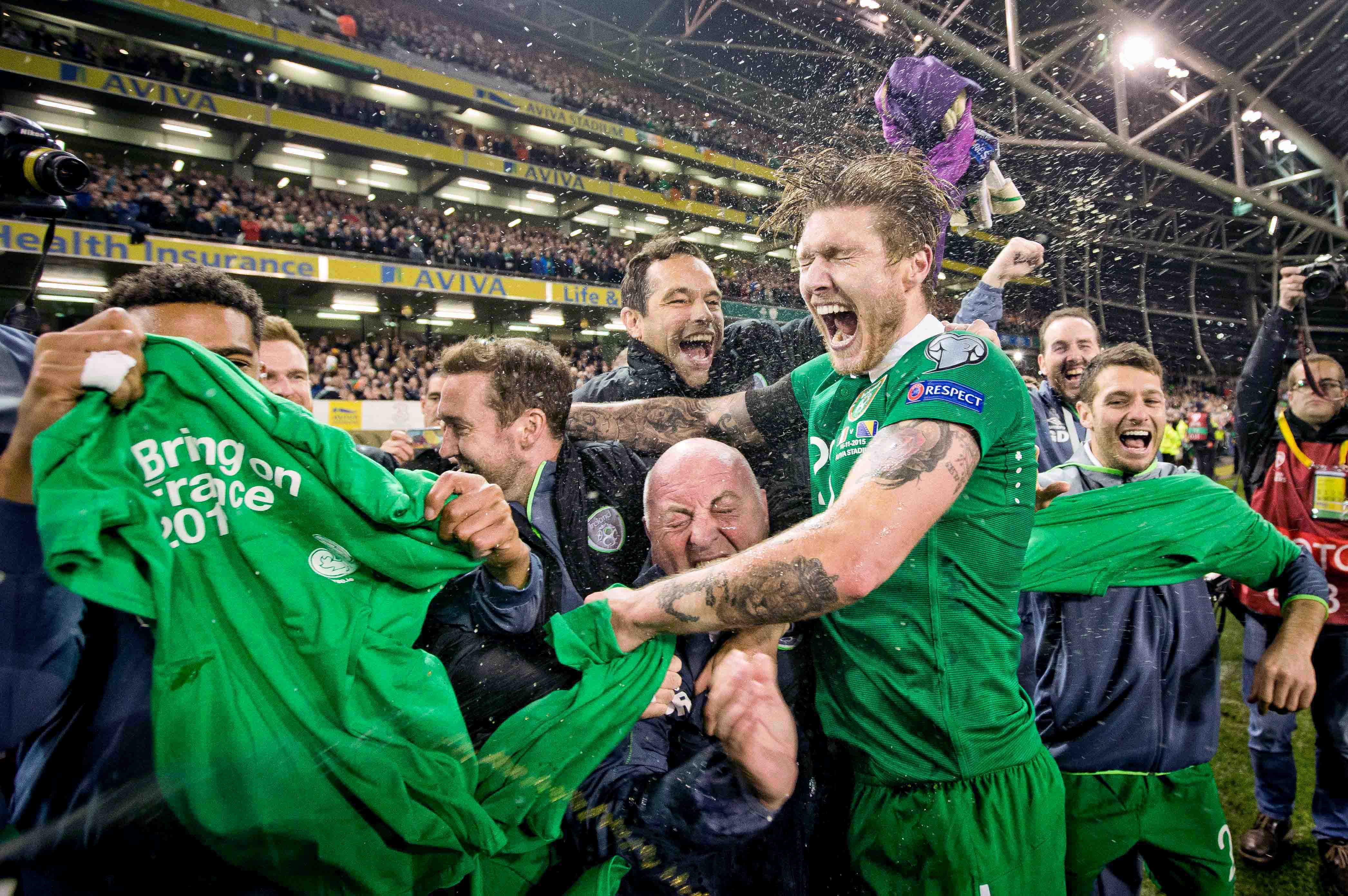 ON A tense and emotional night at the Aviva the Republic of Ireland booked a berth in next summer’s Euro 2016 in France with an assured and solid 2-0 victory over Bosnia-Herzogovina in the play-off second leg.

The match was finely balanced after Friday night’s 1-1 draw in Zenica but any fears that the low-scoring Irish would attempt to grind out a 0-0 draw that would have seen them through were swept away in a first half in which the home team’s physicality and desire had the visitors rattled and on the back foot.

The home team’s superiority was rewarded in the 24th minute when Dutch whistler Bjorn Kuipers awarded them a hotly disputed penalty after the ball shaved the arm of Ervin Zukanovic in the box. The aggrieved visitors first surrounded the ref and then turned their attentions to the goal line assistant who appeared to have made the decision. Front man Jon Walters was unfazed by the drama and stepped up to coolly send his erstwhile Stoke colleague Asmir Begovic the wrong way and the home support into raptures.

Still Ireland refused to defend a slender lead and they maintained their dominance with Glenn Whelan, James McCarthy and Wes Hoolahan labouring effectively in the midfield boilerhouse. The technically superior Bosnians failed to pose any significant threat to the Irish back four, with their main threat coming down the Irish left flank where disappointing playmaker Miralem Pjanic was occasionally able to impose himself on the uncertain Irish left back Robbie Brady. Even so, the visitors were unable to deliver any decisive ball to their increasingly frustrated star man Edin Dzeko.

A single goal deficit at halftime could have been immeasurably worse for the Bosnians, but referee Kuipers opted to give booked centre half Emir Spahic a stern talking-to for a rugged challenge on the edge of the box when a second yellow card seemed warranted.

Not surprisingly, the Bosnians turned up the heat in the second half, putting the Irish on the back foot with some slick and confident interchanges which encouraged their 2,000 supporters and spread alarm among the home crowd. The bench was clearly concerned too and a double substitution on 54 minutes saw McClean replace the increasingly anonymous Hoolahan and Shane Long take the place of the largely ineffective Daryl Murphy.

The changes worked, for while McClean perhaps inevitably gave away three soft fouls in dangerous positions, earning a yellow card for the first one, he was effective in his main task of supporting the previously exposed Brady.

The Irish crowd was back in fine voice and panto villain Spahic sent the stadium into a frenzy on 70 minutes with a straight leg lunge to the midriff of Jon Walters which on another night could well have earned him a straight red never mind a second yellow. But despite his earlier admonition of the centre half, the referee gave a free kick but no card of any colour, to the deafening disgust of the home support.

Up stepped dead ball specialist Brady, whose delivery up to this point had been more dead than special. From the left he whipped in a peach of a cross which had the Bosnian defence at sixes and sevens. A desperate hack by Ognjen Vranjes saw the ball sit up for Walters at the back stick and once again the striker proved the coolest man on the pitch as he fired a controlled volley past a despairing Begovic to give the Irish a diamond-studded cushion.

While the Bosnians persevered, their response was to huff and puff while the Irish defended resolutely. Long’s ability to run behind defences was apparent as he outstripped Spahic on 75 only to horribly fluff his lines on a one-on-one with Begovic.

Manager Martin O’Neill’s decision to stick with the centre back pairing of Ciaran Clark and Richard Keogh at the expense of the available-again John O’Shea paid handsome dividends, particularly in the final ten minutes as they comfortably negated the threat of the burly Bosnian defenders who poured forward in greater numbers as the clock ticked down. O’Shea replaced the spent Whelan on 90 minutes as the Irish closed up shop, but it was shortly after his introduction that the visitors had their best chance of the night. After a goalmouth melee the ball fell to Vedad Ibisevic whose superbly struck volley almost shattered the crossbar – the massive cheer of relief turned to a cheer of victory seconds later.

Elated Ireland boss Martin O’Neill said afterwards: “I never once dared to dream about getting to France, never once because of the group that we were involved in, so it is special. That moment when the referee blows the whistle and you are in France, it is just very, very special, very special indeed.

“It's more special because it means so much to a lot of people, naturally the players first and foremost, but to the nation as a whole."