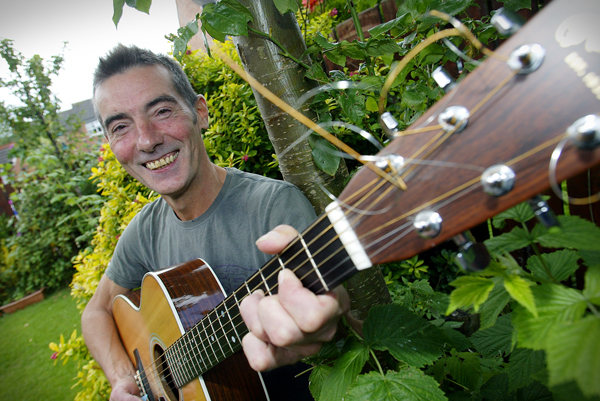 Terry Sharpe is thrilled with the new version of War Stories

A punk anthem from late 70’s Belfast quartet The Starjets has been introduced to a new audience some 40 years later, thanks to Green Day frontman Billie Joe Armstrong.

The Starjets which included Terry Sharpe – later The Adventures’ lead singer – as well as Paul Bowen, Sean Martin and drummer Liam L’Estrange, discovered their song War Stories had formed part of Armstrong’s ‘No Fun Mondays’ quarantine sessions which he performs to fans once a week from lockdown. Their 1979 hit, which the band performed on Top of the Pops, has been interpreted by the Green Day singer-songwriter and has so far clocked up over 175,000 views on Youtube.

Speaking to the Andersonstown News Terry Sharpe said the song will be released as a double A-side single with plans for a Spotify release and also a hard copy in June.

“We got an email from their manager on the songwriting credits and that an album is going to come out so if it sells 10 million copies I’m going to buy a new house,” he laughed.

Terry recalled how almost a year ago The Adventures were the recipients of West Belfast’s Greatest Band accolade at a gala reception in the Devenish Complex. Now the music scene has ground to a halt due to Coronavirus.

“It seems like a lifetime ago,” he said. “God, we didn’t know what was going down our road then. All the work that was lined up – I perform in a couple of outfits, I work around Belfast, plus with The Adventures, everything, bookings-wise, is up in the air, everything is cancelled. I think bands are going to be the last thing to come out of lockdown in terms of performing again.”

Terry spoke of how he is a big Green Day fan. “I think Billie Joe Armstrong did a really good version of War Stories, he really nailed it. There are some really flattering comments on the YouTube post, their sound was what our sound was. We wrote the song over 40 years ago and it hasn’t dated, a thing of beauty is a joy forever,” he said.

Terry said that the ‘Jets are in “good, esteemed company,” as covers during the quarantine sessions have included The Bangles’ Manic Monday, Kim Wilde’s Kids In America and Tommy James & The Shondells I Think We’re Alone Now.

“It does put a bit of a spring in your step, knowing that someone of that stature is doing the song. It gives it a real sense of validation. If and when Green Day come back to Belfast, I’m sure I’ll be able to blag my way in!”