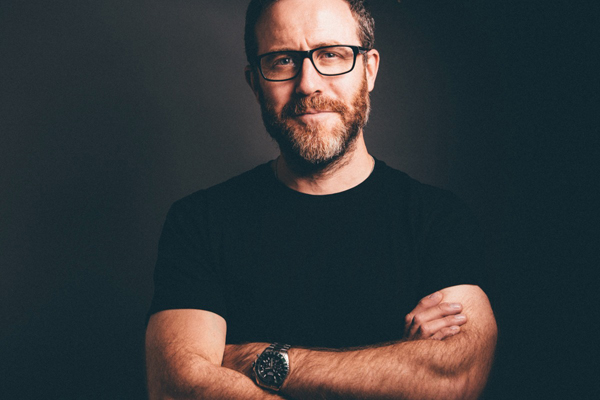 Writer Gary Donnelly with his first book Blood Will Be Born

A BROODING crime thriller braiding together the political past and murky present of Belfast is taking the Kindle bestseller chart by storm with pen already being put to paper for a much anticipated sequel.
Blood Will Be Born, written by former De La Salle College student Gary Donnelly marries the past and present day with main protagonist DI Owen Sheen working to avenge the death of his only brother while adjusting to being back on home soil and working alongside Serious Crimes DC Aoife McCusker.
Originally from Norfolk Parade, and having made London his home these past 20 years, Gary explained how the novel is set in contemporary Belfast with much of the action taking place in the West and North of the city with nods to Sailortown, the Kennedy Centre and Cultúrlann scattered amongst the pages.
“I knew I wanted to write and when I did it was Belfast, or a version of it that came out, and a suspense and crime mystery that wanted to be told,” he said. “Rather than write a post Troubles story, I wanted to explore the main characters, their motivations and how they interacted. The story emerged from that, constantly asking the questions, why and what if...?
“Why was the character of Fryer haunted by a demon of his own naming? What if Aoife McCusker is promoted to Serious Crimes just when the murders begin? Why is Owen Sheen so intent on returning to Belfast, the town of his birth, and what if Christopher Moore starts to obey his dead dad’s orders to unleash chaos?
“I had been working on the book for around a year and a half but it had been gestating an awful lot longer than that, around 20 years. A part-time course mix-up saw me enrol on an online novel writing one and the initial outline of the book emerged from there.
“I kept writing on my day off, weekends and while travelling into work. When you are working full time it’s very hard to find the time but you just have to keep at it,” he said.
“I took my first 3,000 words to Crimefest 2016’s Pitch an Agent slot where it received a big thumbs up from the judges and positive feedback on its potential,” he said. “The book evolved and I was able to thread this story dealing with a number of characters one of whom is very damaged as a result of the Troubles but each one has his/her own agenda that they are working too.”
Gary told the Andersonstown News that he conceived the story “as at least a two book series” and that he is already working on its sequel and Blood Will Be Born will be turned into an audio book in 2018.
When asked if he would impart any advice for those looking to have their work published, Gary replied: “You have to stick at it; you must turn up for work so to speak. “You can always redraft, rework your piece. You can’t do that without opening up your keyboard. A surefire way to writing a novel is to get over the finishing line of completing a first draft and sit down with a bit of discipline.
“The book often felt like it wrote itself, I was just hanging on and trying to keep up.”
Blood Will Be Born is available on Kindle/e-book priced at £2.99 and can be purchased from Amazon, visit www.amazon.co.uk