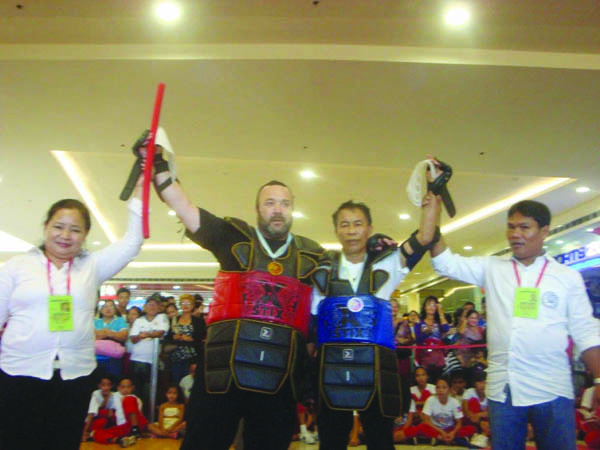 RIVERDALE native, Aidan Cochrane broke new ground as he scored a victory at the Dinagyang Bastonero Stick Fighting Tournament in the Philippines recently.
The West Belfast man has been training in Filipino Martial arts since 1998 and has achieved great success ever since.
In 2002, Aidan was part of the Irish team that participated in the World Stick Fighting Championship, winning gold in the light-heavyweight division which heralded the start of his journey and prompted him to travel to the Philippines and learn the art from the original source.
“Since 2006 I have been focusing on blade arts,” explained Aidan.
“In 2010, I got this crazy idea to enter full contact sword fighting outside Filipino influence just to experience if the same principles apply.”
Since taking up the art, the Belfast man has come third in the Sword Fighting Cold Steel Challenge in California, second in Knife Fighting in the Cold Steel Challenge in California, while coming first at the Historical European Martial Arts in Germany and the International Chinese Martial Arts Full Contact Sword Fighting competition.
“This year I have decided to research more in depth on the Filipino culture and arts, so on January I headed to the Antique Mountains in the Panay Islands to train with Grand Master Sobrino,” Aidan continued.
“I was surrounded by pythons, wildcats and roosters which were bred for fighting known as Sabong and we trained from 6.30am to avoid the intense afternoon heat.
“We covered multiple weapons and defence and on the last day I was looking forward to chilling out at the annual Dinagyang Festival which is massive event in Iloilo City.”
However, his teacher had other ideas and Aidan found himself in a much less relaxing environment that resulted in further glory for the Belfast man.
“Master Sobrino said he wanted me to fight at the Dinagyang Bastonero Stick Fighting Tournament and right there I would have preferred to swim with sharks with a cut ankle,” he laughed.
“Fighting these guys on their home ground is something I have not experienced before and decided to give it a go.
“I had two days to prepare so come Friday I was the only person with a western face in the area which was held at the SM Mall City.
“The fight was scheduled for three, two-minute rounds and my opponent gave me everything he had.
“Fortunately for me I won being the first foreigner ever to compete at this event.”
This was a fantastic achievement for Aidan who has immersed himself in the local culture and he has decided to make a chance this year to help get the best out of himself in his new discipline.
“I enjoyed myself immensely being exposed to their culture and approach and love of their arts,” he confirmed.
“I have now been accepted to go back and continue which I will do once a year.
“At 55, I am reducing my tournaments to just once a year so I can focus on this new found art that practiced in the mountains.”