Why I'm interested in exploring the world of journalism 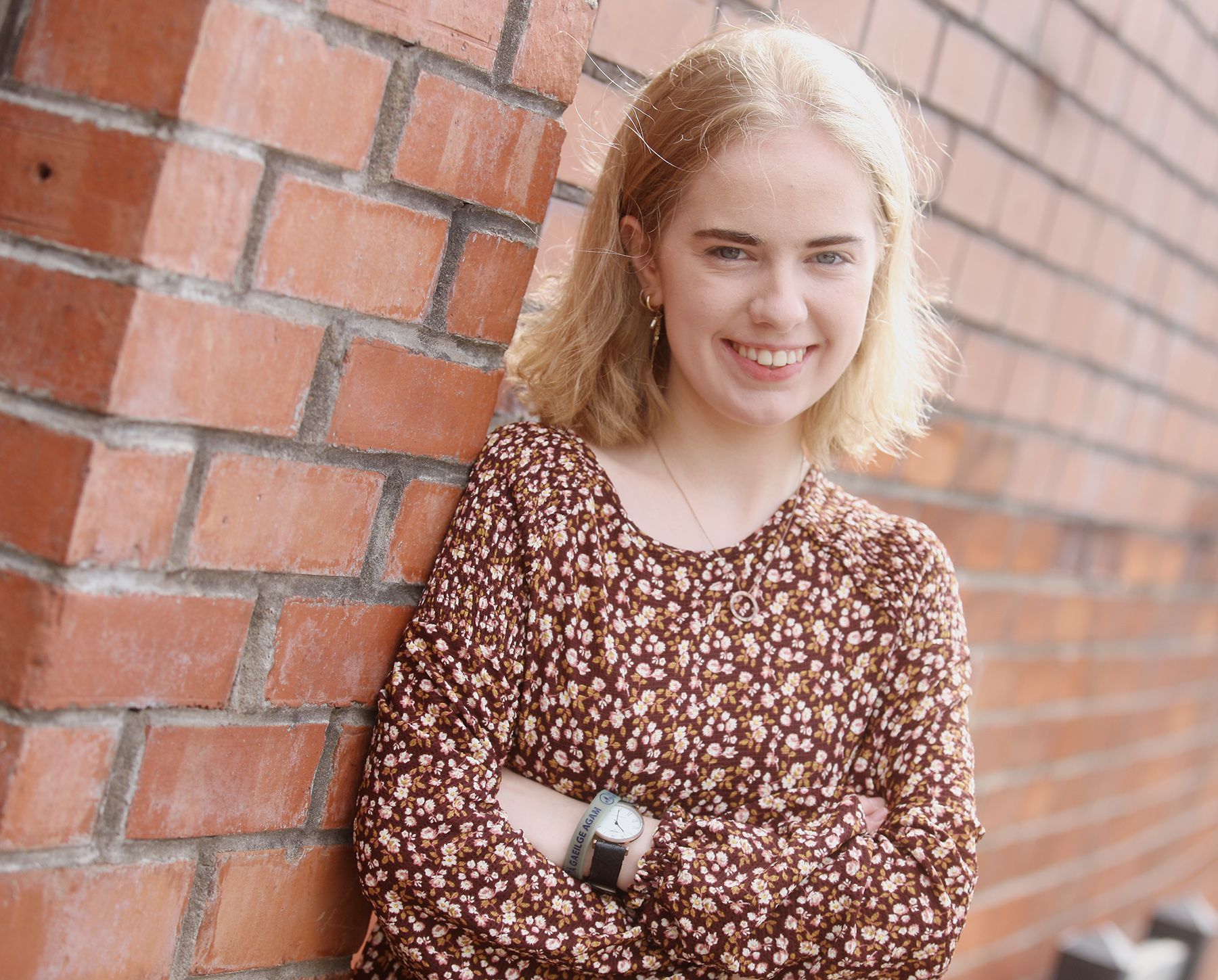 WORLD OF JOURNALISM: Eimear Eastwood is on work experience with belfastmedia.com

MY dreams of being a journalist stem from a child-like curiosity in the everyday events. Even if such an event was widely insignificant. For example, why is this road closed? Who closed this road? Why are people so angry while others seem so unbothered? For me, there are no questions that can go unanswered, and therefore I would bother everyone in my life with perpetual questions until I found the answers.

As I got older this then extended to an interest and desire to observe wider and more significant events, particularly those involving the themes of politics and women’s rights and justices, both of which are topics of particular significance to me.

My interest in journalism hit new levels in 2020 – at the peak of the Covid-19 pandemic. With nothing to do but watch the world fall apart, I turned to the news. At this point I was always watching American news broadcasters, particularly Julia Chatterley on CNN. It was inspiring and uplifting to watch a woman of such substance and intelligence presenting complex reports on issues such as the world’s health crisis, the social injustices in the country – particularly the racial injustice in the USA which reached new heights in the summer of that year – and the dramatics of the USA 2020 Presidential election. This dedication to uncovering the world around us made me realise and appreciate the rewards of journalism. This career means uncovering real truths about the world while allowing the wide views of the public to be incorporated.

"There's a great deal of concern amongst the business community over heightened tensions in the Taiwan Strait."@RJHCUSTBC President @ustaiwan discusses reactions from US companies engaged with #Taiwan, where he sees investment shifts out of #China & his thoughts on tariffs. pic.twitter.com/ewZsOxd7VY

What I find so intriguing about the world of journalism and researching also is how these world truths and views are so varied based on who is asked what questions. Our world is full of opinionated people and these conflicting natures make for powerful stories. For example, in the last two years we have seen how government induced face masks – to prevent and limit the spread of Covid-19 – sparked mass controversy. We got to see how a health provision became to some “a breach of fundamental human rights". It shows how a career in journalism allows the depths of the world’s functioning to be explored from a range of different viewpoints.

My interest in government and world politics reinforced an interest in the world of journalism because of the dramatic changes and intensity. Politics makes history on a local and international level and it is this ability to be so current, but also historically significant, that drags interest for journalists, and also just general observers.

For example, locally, in 2019 John Finucane was the first Sinn Féin MP (Member of Parliament) to be elected for North Belfast, a community which had become accustomed to generally Unionist leaders. Then on the other side of the world in Estonia, Kaja Kallas was elected as the nations first female Prime Ministers in January 2021. What is interesting from a journalistic standpoint however is how these respective governments interlink and contradict each other. For example, the USA Senate would never dream of stepping back while the Northern Ireland Assembly have shown they have no issue with taking month long sabbaticals. This is where politics and journalism become linked which is fascinating to oversee as it shows how vastly different each country functions which then produces a discussion for the public, and writers, about which country has the strongest and most efficient form of government, and if that even means anything given the general state of the world and the world leaders who are responsible for it.

Just home from the election count. What a victory for SF in North Belfast. A victory for John Finucane MP. Victory for hope over fear.Victory for Remainers.For equality and rights for all.For change.For reaching out. I’ll leave the negativity to others. Congrats to Team Belfast. pic.twitter.com/oPDvAacxp5

On the other hand, the research and critical thinking of journalism shows how not all governments and countries are extremely different despite being physically apart. For example, it has been shown that the religious and political divides here in the North of Ireland mirror that of the Israel and Palestine conflict. What this shows is that the world of journalism, investigating and critical thinking, opens doors to discussions about our world’s rich complexity in its ability to have such momentous events within each country while at the same time acknowledging the harsh realities occurring in the everyday life.

One of the things in this life I take most seriously is the Irish language. Although in Belfast, and in the North of Ireland generally, Irish has been seen as an antiquated, “dead language”, Irish is a language full of great strength and history and is a greater part of our city than many realise. For example the Shankill Road in Belfast is a well-known largely Unionist area. However, what many fail to see is that its name comes from the Irish word ‘Seanchill’ which means ‘old church'. It is evident also how much Irish has grown and become more appreciated in the North. For example, according to the Irish Post in 2021, 12 per cent of people in the North of Ireland felt confident as speakers of Irish and 15 per cent would say they are confident in their ability to understand the language.

As a learner of the language it has been inspiring to watch Irish become more and more mainstream due to the dedication of local Gaeilgeoirí,  as well as the workings of the An Lá Dearg campaign who have been fighting for the signing of an Irish Language Act in the North, with several marches and protests in the last couple of years. It is uplifting to see how our native language has become stronger and stronger. As we enter a new age in terms of the Northern Irish political climate we can see how our generation’s sense of pride and patriotism – maidir leis Gaeilge mar theanga – has created an age of passionate, inspired, intelligent Gaeilgeoirí.

My greatest passion in this life is that of feminist theory and women’s rights and equalities. Women watch the world work against them in every way possible. The limitations of the glass ceiling means that there is only so much for women to achieve in their careers, while the deep rooted misogyny means women are faced with backlash from society whether they have a career or not. This permeant misogyny is also evident in the increasing amounts of knife crimes and street murders against, usually younger, women that has been seen time and time, again beginning with the kidnaping, raping and murdering of Sarah Everard in March 2021, then Sabina Neesa in September 2021 and then Aisling Murphy in January 2022. Furthermore one third of women, globally, have experienced physical and sexual violence at the hands of their partners, non-partner relations, or both at least once in their lifetime. Only 30 per cent of these women have been aged 15 or older.

Many men have taken the opinion that feminism, as a principle, is based on unfounded reasoning despite growing discrimination in our own area. According to ‘Northern Ireland Forced Labour Survey’, which was published in March 2022, 60 per cent of employed women with children work full-time compared with 94 per cent of men. Furthermore in 2021 women were earning an average of 5.7 per cent less than their male counterparts. Feminism comes down to being defined as the fundamental notion that women are people – not sex objects or cattle, useful only for the purpose of breeding – but people in their own right with ambition and drive and desire, none of which deserve to be cut short by the sexist narcissism of men.

At a beautiful vigil for Aisling Murphy outside City Hall. I hope its of some small comfort to her family. There is no place for violence against women & girls in our society & we must redouble our efforts to end it @DeirdreHargey @NiallSF @newbelfast #shewasgoingforarun pic.twitter.com/wUnkURyxhN

It is without doubt that the world of books and literature is fanatical and enticing. What is even greater though is how these stories can apply to real life. In my opinion the greatest novels are the ones that leave the reader feeling like they have experienced another life without that story being drastically different to real life. This theme can be seen across centuries of writing with many different lives and experiences within each story. For example Jane Austen’s 1796 novel Pride and Prejudice discusses how social class and a woman’s ambitions can interfere with her marriage prospects. Despite this novel being nearly 200 years old the stories themes and portrayal of a woman’s life and her, lack of, choices has still rung true to women today.

One of the greatest things about literature also is the debates and discussions that there is to be had. For example, who is the real victim in Of Mice and Men? – Lennie or Curly’s wife? Where Heathcliff and Catherine soulmates or their own worst enemies? Was Jo March right to reject Theodore Laurence, or did she jeopardise her future in the process? This is where it gets more and more interesting as the book turns from a story to a real series of events for the reader. What I find so amazing about reading, personally, is how readers and students of literature discuss these questions with the same level of energy and dedication that journalists do as they investigate and debate topics such as elections or scandal.

Both the lands of literature and journalism involve the observation of human behaviour and relationships, scandalous events and the consequences of those actions. Therefore the involvement in the world of fiction enhances an interest in the career of journalism.