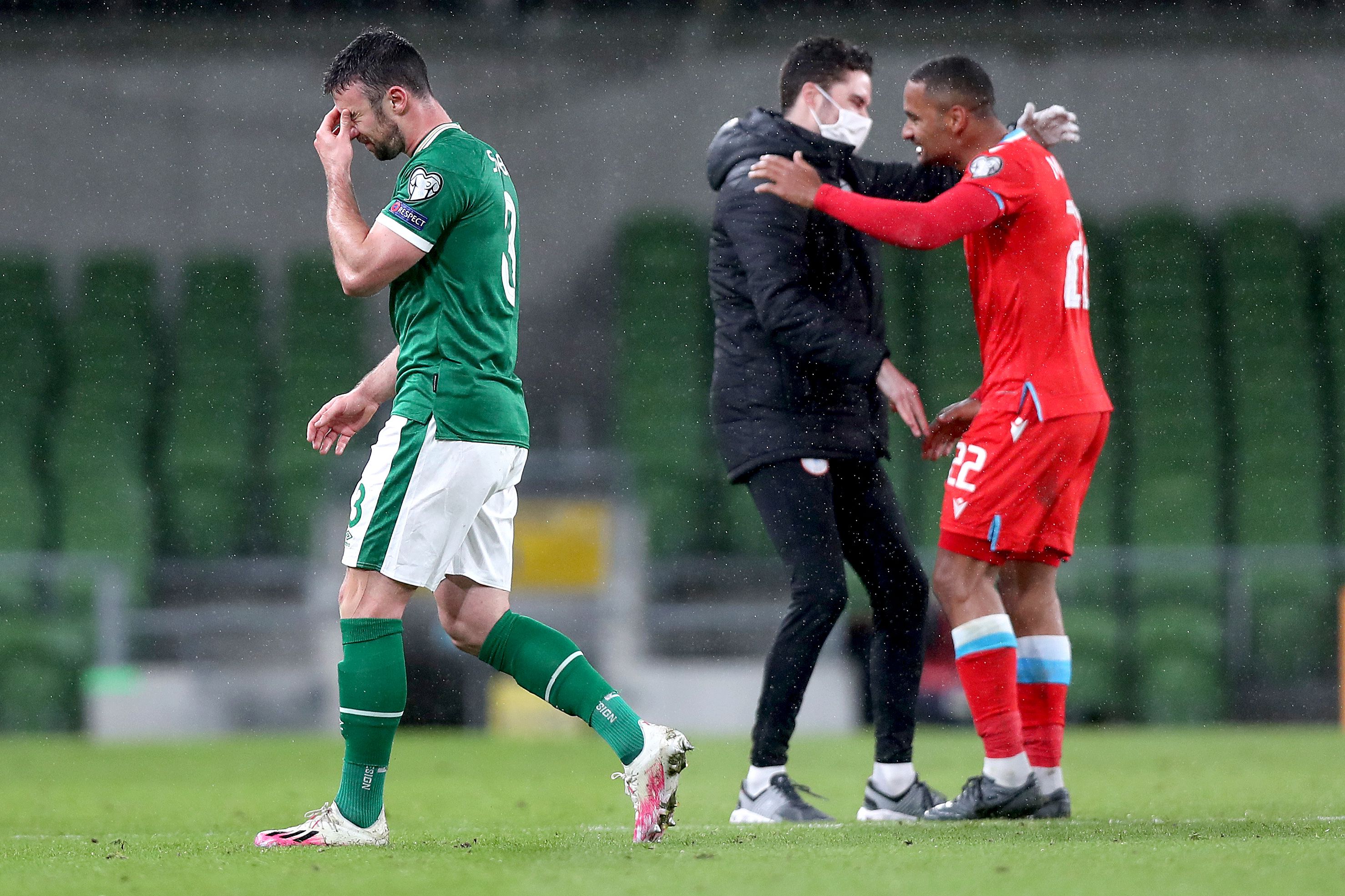 A dejected Enda Stevens at the end of the game INPHO

ROCK BOTTOM? It certainly feels like it and not just in terms of Group A where the Republic of Ireland find themselves rooted to after Saturday's dismal 1-0 defeat to Luxemboug at the Aviva Stadium.

Forever the whipping boys of Europe, Luxembourg arrived in Dublin with their stock slightly raised than in times gone by, but this, just their fourth win in 125 away games, was almost inevitable as the game played out.

Ireland huffed and puffed, but made little impact in attack and the visitors looked the team more likely to score.

Indeed, the only player from the two starting teams who plays Champions League football was Luxembourg's Gerson Rodrigues who lashed home a winner for the visitors five minutes from time.

That tells its own story. While some will pin the blame at this horrendous defeat at the door of manager Stephen Kenny, in truth it's an outcome of a failure to develop and produce players who are capable of competing for the top clubs.

Whether a change in tact by resorting to a new - or old - approach of splashing the cash by the potless FAI on a celebrity name whose best days are behind them is an argument that will grow in some quarters, but the outcome of this defeat will lend it some weight.

There were no excuses after by the manager who admitted the performance and result was unacceptable as Ireland's hopes of reaching next year's World Cup in Qatar are realistically over.

"It was a bad night, but we just have to dust ourselves down and go again," he told RTE after.

"We're all gutted, but we have to take the criticism. It's a terrible result and there's no hiding from that. It's not good enough.

"It's really disappointing to go from the performance in Serbia to that. To lose against Luxembourg is completely unacceptable.

"Anything I say will sound like excuses, but it just wasn't good enough. That James Collins chance in the first half would have changed everything.

"The players are a lot better than what they showed and the difference in performance (between this) and Serbia was chalk and cheese, so overall it was disappointing."

This sentiments were echoed by captain Seamus Coleman. The Donegal man was a dejected figure as he tried to make sense of a result that must rank as the worst in Irish football for quite some time.

The Kenny strategy of passing the ball rather than hit and hope has not borne fruit and some will still believe that going route-one to the big man in attack who hasn't existed in close to a quarter of a century is the way forward.

The frustration and anger is legitimate after this most dismal of days and Coleman was honest in his appraisal, but believes the system was not the issue on the night.

"It's a shocking result, an embarrassing result," said the Everton defender.

"Let's not hide behind anything, it's on us as players. We need to have a long, hard look at ourselves. We take that on the chin, but it's nowhere near what we wanted.

"There are no words I can say to make people at home feel any better. As players we should be disappointed to have young Gavin's (Bazunu, goalkeeper) debut tainted like that. As senior players out there, we should be taking it on the chin for those young lads."