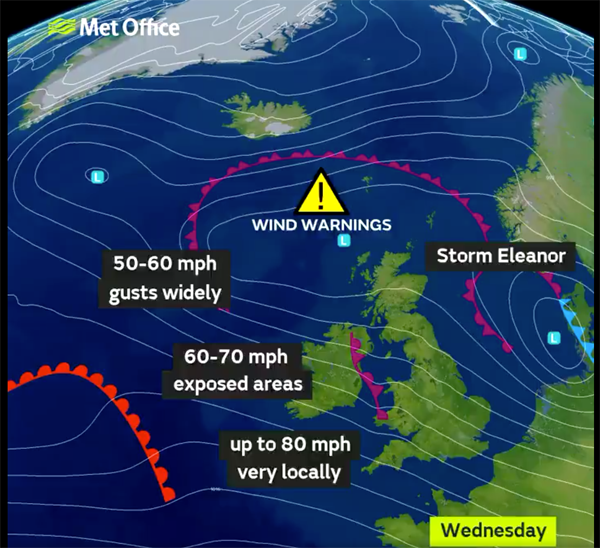 A yellow weather warning has been issued by the Met Office

A YELLOW weather warning has been issued for the north ahead of the arrival of Storm Eleanor.

Strong winds measuring up to 80mph are expected and gales with gusts of 60 to 70mph are likely.

The Met Office warning is in place from 6pm tonight (Tuesday) until 8am on Wednesday.

Paul Gundersen, Met Office Chief Forecaster, said: “The wind will pick up again later on Tuesday and Wednesday as developing Storm Eleanor heads towards the UK and Ireland.

“Storm Eleanor will bring a very windy spell to the UK on Tuesday night and Wednesday with gales or severe gales in places and National Severe Weather Warnings have been issued as there is the potential for some travel disruption, and high waves throwing beach material on to sea fronts, roads and coastal properties, along western and southern coasts.”

Storm Eleanor is the fifth named storm this winter.