Young people catch on quickly to opportunity for reaching out 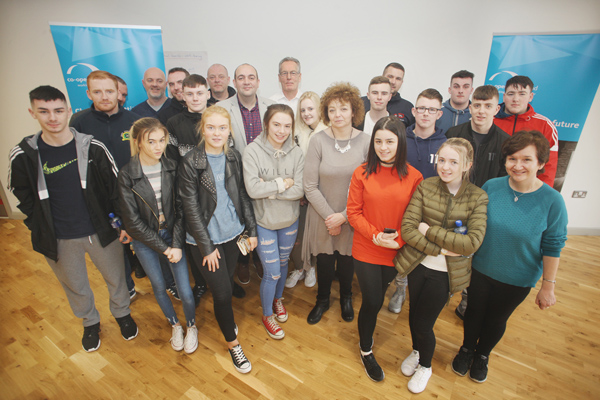 AN innovative project is doing its bit to tackle issues affecting young people in North Belfast.

The CATCH (Challenging Attitudes, Changing Horizons) programme was launched in 2013 by Co-operation Ireland and now involves more than 400 young people across the north.

A series of workshops have been organised which help the young people develop a positive sense of identity, cross-community contact and mutual understanding along with a sense of community engagement and social responsibility.

During the workshop, young people took turns to talk to each representative about key issues, including mental health and well-being, community, rights and dealing with the past.

Barry Fennell, Project Manager, Co-Operation Ireland, who helped organise the event, highlighted the importance of engaging with local young people on issues which affect them.

“The idea behind the forum is to give young people from North Belfast who are participants on the project a chance to provide them with an opportunity to engage with people from different backgrounds,” he explained.

“It’s about an open space, a moving dialogue to address key themes. It’s about engagement, personal development and building confidence and challenging issues and subjects which are relevant to them.

“We encouraged the young people to get involved in flowing conversation with issues explored with various representatives.

“Engagement is hugely important and extremely significant because young people’s needs and concerns are often overlooked and they don’t really get that chance to talk about these things.

“In a forum like this, they get that chance. They have the opportunity to ask questions be pro-actively involved and understand issues that impact them.

“I hope they take away a sense of empowerment and a bit of confidence around understanding some of the key themes.”

CATCH is about young people and making their voices heard in their community and being a force for positive change in those communities. The project has also been delivered across schools in North Belfast including Belfast Royal Academy, Edmund Rice College, Hazelwood College and St Patrick’s College.

“An important element of the project is about the young people in getting the opportunity to voice their own opinions and concerns and try and address some of the questions they have with people who represent them,” he said. “Issues that affect their communities and well-being are so important. Through consultation with young people, it’s always been flagged up that mental health is one of the main concerns for young people. I think by attending the event young people have shown great commitment to themselves and leadership qualities as well as the development of the work has enhanced their lives. It’s important they take away support mechanisms and knowledge of issues that affect them so they can put them in place We see ourselves in the heart of the community and want to showcase how valuable these young people are to themselves and their family and to allow them to continue to enhance their skillbase.

www.cooperationireland.org/ for more information about the CATCH project.