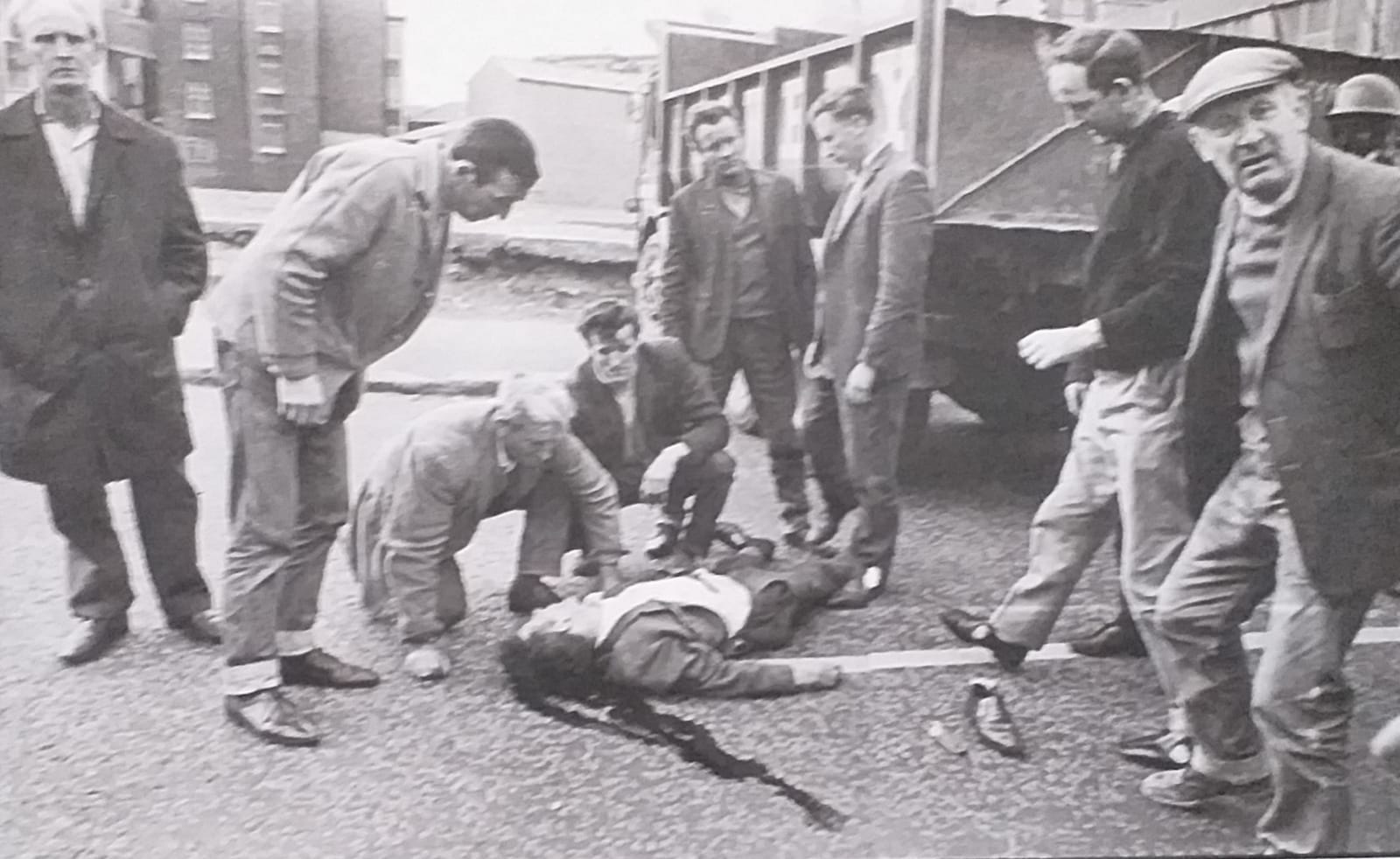 CURFEW VICTIM: Charles O'Neill lies dying after being run over by a British Army vehicle during the Falls Curfew of 1970.

Charles (Charlie) O’Neill had only returned to live in Belfast a few months before he was run over and killed by British Army vehicle during the Falls Curfew of 1970.

The 36-year-old was returning home from St George’s Market when he arrived at a British army barricade as the curfew was starting, near the old Falls Baths. With his hands raised, he tried to advise soldiers to leave the area – warning them of the potential danger. An armoured vehicle was driven through the barricade and hit him. He died at the scene.

The youngest of three children born to Kitty O’Neill, Charles was raised in Linden Street in the Clonard area. As a young man he moved to England to join the Air Force. While there he married a young woman from Cornwall called May and had two children, Susan and Stephen.

Having fallen seriously ill with Tuberculosis, Charles was forced to retire from the Air Force and later moved back to Belfast to be with his family.

His niece, Colette McDaid, describes her uncle Charlie as a “quiet man” who, “because he was away in England” was “trying to get to know us all again”.

Being 19 at the time, Colette can vividly recall the day her uncle Charlie was murdered, and recalls the tragic circumstances in which her family found out that he was killed. After finishing her day’s work she made her way to her grandmother Kitty’s, where Charles lived.

“I always came round to my granny’s on a Friday, and that Friday, the 3rd of July, I came round and there was nobody in,” she said. “I waited and waited and nobody came.

“When I went out I saw a crowd coming up the street and I thought I would have to get up home because there seemed to be trouble on the road. There were no buses on – I lived in Turf Lodge – so I made my way up and didn’t think any more of it. I knew there was trouble down the road. By that time Charlie himself had gone to St George’s Market to get vegetables for my granny.

“That morning, my granny Kitty, my mummy and daddy – they usually got the Irish News. They found his name in the Irish News, but they had him at a different address. I think automatically my granny knew. That’s how they found out that my uncle Charlie was murdered the day before.”

Eyewitnesses of the killing confirm that Charles posed no threat to his killers. As an Air Force veteran, he tried to help quell the situation that would descend into around 36 hours of violence and along with his own death, would see the murder of three other civilians.

“I think with him being in the Air Force he thought that could have directed them to go back,” Colette said. “He put his two hands up to say go back, because it was a hostile area – to stay back.

“Another fella had been standing talking to him at the time. He got out of the road, but Charlie didn’t make it. They just kept coming. Whoever was in charge of the patrol told them to push through the barricade.”

She added: “They hit him side on, threw him up in the air and then came back on his head, and he was killed nearly outright.”

The Falls Curfew lasted between between July 3rd and 5th and saw the entire Falls district locked down while soldiers ransacked homes in the area. As well as four killings by the British Army, 78 people were wounded and 337 arrested.

Eighteen soldiers were also wounded in battles with local youths and the IRA.

The families of those killed during the Falls Curfew launched a fresh bid for an inquest into their loved one’s deaths. They have never been given justice.

After identifying his body, Charles O’Neill’s family were handed his clothes back in a paper bag. A medical card and Air Force card that he was carrying at the time of his death was never recovered.

Colette says the family have “never received an apology”.

“I just want to stress that the four people killed were innocent people,” she stated.

“I think at this stage an apology would go a long way, but I can never see it coming.

“It’s good to highlight now because as the time goes the young generation don’t know what happened. The older generation don’t forget because there was many killed in it and many people have never got apologies.”

Full details of our online commemoration will follow. pic.twitter.com/LGNq6aNeql