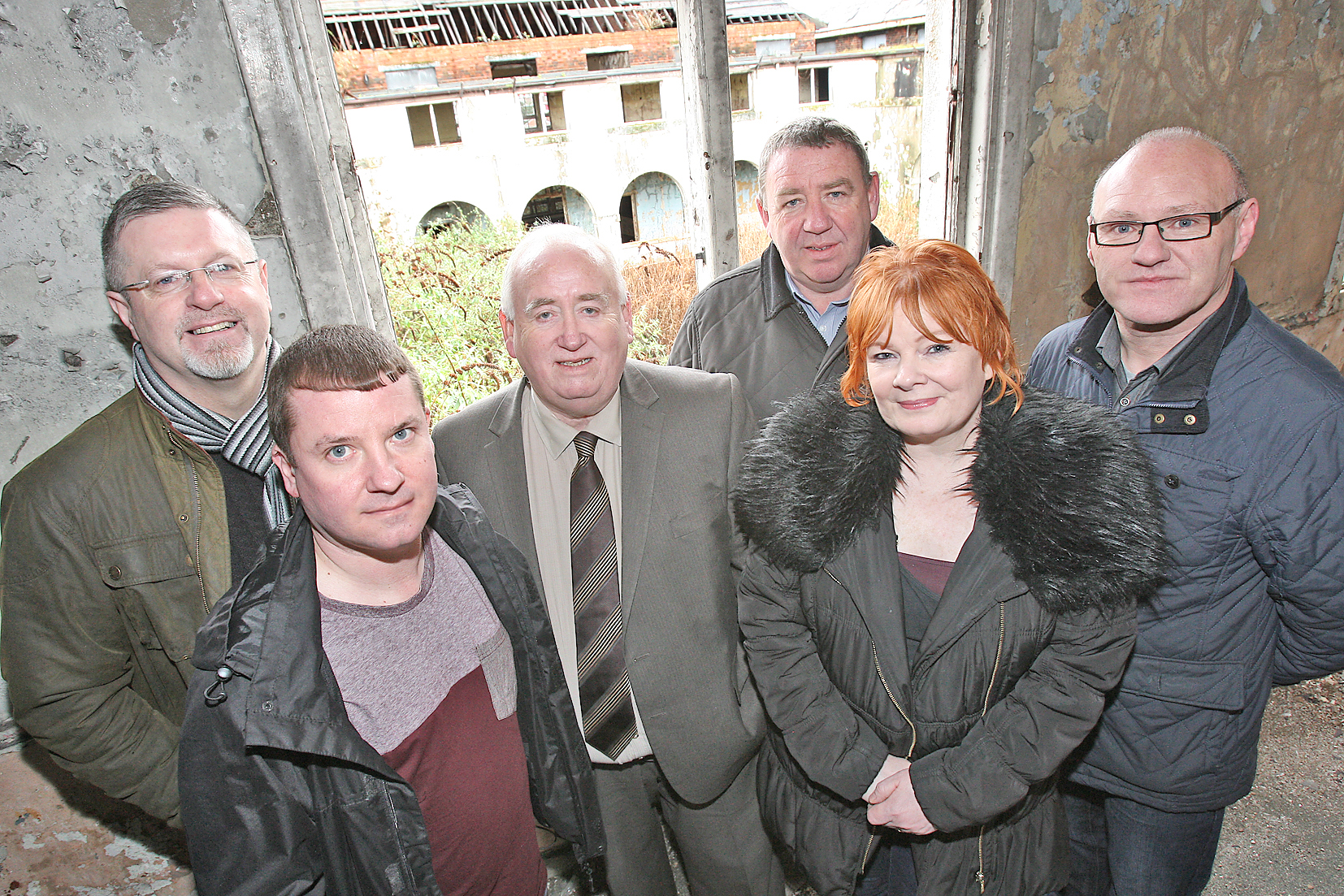 The former St Comgall’s primary school building in Divis Street is set to be given a new lease of life with an ambitious £7 million project.

Both Belfast City Council and the Social Investment Fund (SIF) have provided £3.5 million each in funding to renovate the historic building that is currently owned by the Falls Community Council (FCC).

Having been vacated in the mid-nineties, the B1 listed edifice has been in disrepair for a number of years, however, the Falls Community Council now plan to restore the building as a multi-functional public space for community, cultural, learning and tourism.

Sinn Féin’s Fra McCann thanked FCC for their tireless efforts over the years to maintain the building while planning the next chapter of its future.

“The Falls Community Council needs to be commended for purchasing the old school in the first place and for helping to develop the plans,” said Fra McCann.

“Their background is steeped in community activism so I think that will be beneficial for the project. I’m also very proud of the role that Sinn Féin has played in this, and our representatives need to be commended too.

“This is one of the most socially deprived areas in the North, so we hope that this will be another lift for people in this community, not only in terms of being able to enjoy the new premises, but also for the employment that it will create. Projects like this remind you of the vibrancy and culture that this area has.”

Mr McCann also noted the historical significance of the site, and said he hoped the building would “keep alive memories”.

“It’s a place where local people have many, many fond memories of dances, carnivals, and even football that was played in the school yard, so it has always been a part of the local community,” he explained.

“We’re also close to the spot of the Divis Street riots of 1964 where the RUC attacked the local republican election headquarters. It’s also worth mentioning that in 1969 this area bore the brunt of the pogroms and loyalist attacks. At the gates of the school two teachers were shot, and one died in 1972, which was just after Joe McCann was killed. So there are fond memories and sad memories too.”

Local history will, of course, feature heavily in plans for the redevelopment. Both tourists and the West Belfast community will be able to explore the rich history of the area through a number of interactive and immersive exhibitions which will take up place within the new development.

Space in the building has also been earmarked for offices, a restaurant, and even theatre and performance space. The former school courtyard will be enclosed by an innovative glass roof design that will transform it into a multi-functional space for community and private use.

“Our vision is to rebuild the school, which has a special place in the hearts of the local community, and provide jobs and economic growth to the area. This beautiful building has lain vacant for too long. It’s restoration will be a great source of pride for local people and bring many visitors to the west of the city.”

Marie Maguire, Deputy Director FCC, added: “By bringing more visitors to the area we are hoping to bring an economic spin-off to other businesses in the area. In terms of visitors to St Comgall’s we will work in partnership with organisations like the Black Taxis and Coiste to ensure they also benefit from a greater number of people seeking tours of the area.

A delighted West Belfast MP Paul Maskey said he hopes that the investment will make the building, situated near the city centre,   “a huge welcome sign for people coming to the area”.

His party colleague, Cllr Jim McVeigh has worked alongside the Falls Community Council on the project for a number of years, and was eager to draw attention to the magnitude of the investment.

“It’s the biggest single investment in West Belfast apart from the money that was set aside for Casement Park,” he said.

“We’ve been planning for well over ten years. It’s a beautiful building, and to be able to return that to the community is amazing. It’s going to transform this part of the road.

“We’re hoping it will provide hundreds of jobs during construction and after construction when all the space is occupied.”

While final plans have not yet been confirmed for St Comgall’s, Irish medium primary school Gaelscoil an Lonnáin still hope to secure a place within the building.

The nearby school has currently taken a Judicial Review against DUP Education Minister Peter Weir’s decision to reject their application for relocation. Many within the local community hope that the former school can still function as an educational establishment. Work on the former school is due to begin in the autumn.