A downside to updating 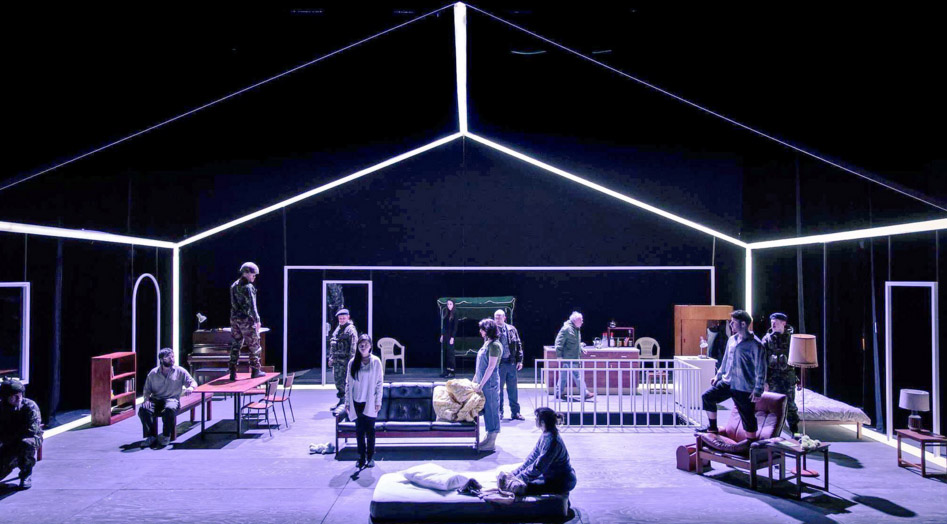 Some of the best plays shown in Belfast in recent times have been traditional works updated to modern times, but transporting stories is not always plain sailing. That’s certainly the case with Three Sisters, currently running at the Lyric Theatre.

The classic has been rewritten by novelist Lucy Caldwell and is set in 1990s Belfast. So where Chekhov has our sisters living in pre-Bolshevik Russia, our sisters are concerned with the looming 1994 ceasefire here – not like for like, but a momentous event nonetheless.

The play is the tale of stifled ambition set to the background of military upheaval and weary soldiers pondering on what the future holds.

The three sisters – Orla, Marianne and Erin – are no longer the daughters of a late Russian Army officer but the children of a British soldier who moved to the north where his wife was brought up. He was an English Catholic, adding another layer of confused identity.

The girls in this adaptation – written in conjunction with Ardoyne writer Paul McVeigh – pine for an America they have never seen, rather than the Moscow Chekhov’s three sisters lived in before their father’s posting to a remote city with his unit. They don’t like Belfast at all but their accents and turn of phrase mean they could never be mistaken as coming from anywhere else. Their interaction with the soldiers is uneven but Tim Treloar’s Vershinin, who embarks on an affair with Marianne, is the best thing in the play.

Marianne’s husband DJ Cool (Patrick McBrearty), who retains his sunny disposition even when he finds out about her unfaithfulness with the dashing soldier, also works very well. He elicits the most sympathy as well as most of the few laughs.

But from the off, the sisters are hard to relate to. They are self-absorbed and their unexplored casual racism towards their brother’s Chinese wife makes it hard to feel any empathy for them.

Amy Blair’s Erin is perhaps the exception to this. Her character displays the most convincing sisterly development over the four acts, going from the most idealistic of the three to the one prepared to make the biggest compromise.

There are high points. Uncle Beattie’s disintegration is well played and Christine Clare’s portrayal of the depressed Marianne, who finds short-term joy in her affair with Vershinin, are particularly good. The set is great, with the frame of the house outlined in neon lights and the costumes are fantastic with great use of the dreaded shell suit rooting the drama firmly in the 1990s.

As an adaptation of Chekhov this falls a little short, but it is more successful as a standalone study of pre- and post-Troubles Belfast.

Three Sisters runs at the Lyric Theatre until November 20.