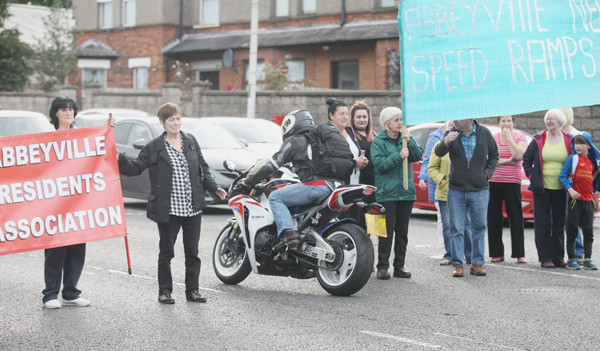 A NEWTOWNABBEY community have been refused speed ramps after they were told there was no history of road accidents or fatalities in their area.
Residents of Abbeyville held a protest to express their opposition at the decision by the Department of Infrastructure (Dfl).
Emmanuel Mullan, Chair of Abbeyville Residents Association, said the community felt ‘let down’ by the decision.
“The Abbeyville community have been let down,” he said. “We had asked for speed ramps in the area and the response has been negative.
“We were told the area has had no accidents in the last five years and the speed limit in the area is under 14 miles per hour.
“First of all, there are no speed limit signs in the area and no children playing signs as such.
“Speed ramps should be in place to prevent deaths and accidents before and not after they occur
“Money is simply not the point here. How can you put the price of installing speed bumps on a child’s life? It simply does not make sense not to have speed ramps installed in our Abbeyville streets.
“Personally, I think it is only a matter of time before someone is killed. If a bad accident or fatality occurs in the future, at least our protest will be on record. It is something the Dfl will have to live with.”
Emmanuel said residents are asking Dfl to respond to their request and to “do the right thing and install the speed ramps”.
“We are also requesting traffic lights at the bottom of Abbeyville Street. Drivers simply cannot get out onto the main road during rush hour and a zebra crossing is also needed for people attending the church.
“It has also come to our attention recently that around 39 more houses are to be built in Abbeyville Place which means more traffic in the area.”
Local Green Party Councillor and Abbeyville resident, Dawn Patterson expressed her support for the residents.
“I worry about kids playing in the street with the speed of some cars around the area,” she said. “Other similar areas have speed ramps, so I don’t see why Abbeyville should be different. I fully support the local residents in their campaign for speed ramps.”
A DfI spokesman said: “The Department receives many traffic calming requests and, given the limited amount of funding available, has a prioritisation system which is based on a number of factors including collision records and the speed, volume and type of traffic.
“In the assessment the highest proportion of the score is given to safety and, thankfully, the area in question has an excellent safety record, with no recorded personal injury collisions in the last five years. The average recorded vehicle speed is 24 mph, which is below the speed limit.
“Taking these factors into consideration and when compared to other such requests in Antrim and Newtownabbey Council area, the Abbeyville request does not score sufficiently high to merit inclusion on a Traffic Calming program at this time.”