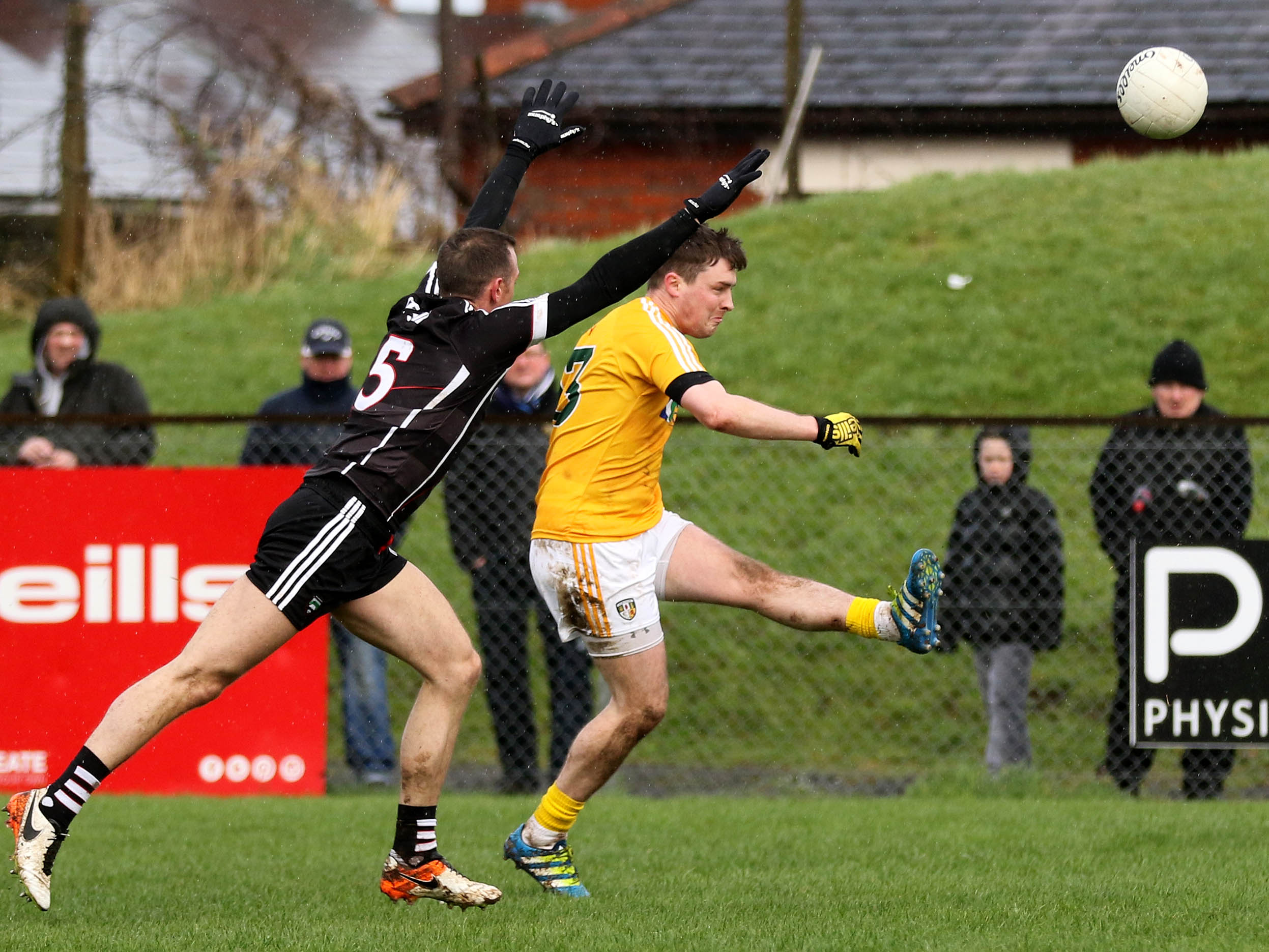 CJ McGourty may have landed the match winning point against Sligo last Sunday but he insists more will be needed to claim a victory against an in-form Louth side this weekend. The Saffrons will travel to Drogheda on Sunday buoyed by a one-point success over the Yeatsmen – a win that lifted them off the bottom of the Division Three standings.

Indeed, Antrim are now level on points with Laois, Offaly and Longford with four games remaining and have given themselves a fighting chance of staying in the division. Louth, along with Division Four pacesetters Wexford, have a 100 per cent record with three wins from three and would move a step closer to sealing back-to-back promotions with a win over Antrim.

After converting a stunning long-range free to get Antrim off the mark, McGourty hailed the character shown by the home side last Sunday.

“There was pressure on the free but that is my job for the team. I knew it was a biggie,” said McGourty. “Obviously we had no points on the board and there were still two or three minutes to play. I knew Sligo were well capable, with the players they have, of going up and getting a score. It turned out to be the winner but it was a big second half performance from everyone to give us the platform for that last minute free.

“We showed a lot of character to get out of that dogfight and that is a real positive for us. “We will take the Louth game as it comes. They are going well and we will need another good team performance.”

Antrim’s prospects of retaining their Division Three status appeared bleak after they opened their campaign with successive defeats to Tipperary and Offaly. The improvement from their 13-point loss to the Faithful County to last Sunday was remarkable but McGourty insists the mood in the camp remained upbeat even though results on the pitch were poor.

“The team spirit has been very good – maybe we didn’t show that in Tullamore,” said McGourty. “The mood in the camp has been good even though we had those two defeats. “Today (Sunday), I think there was a bit of a response. Playing at home is a big plus too and it was good to see so many people out in the rain. It was a good team performance. We needed a reaction and that’s what we got.

“The two points gives us a platform to push on but we are still in a dogfight. We are hoping to give ourselves a chance to stay up on the last day when we play Longford. “It is going to be crucial. Over the next few games, we need to pick up points against Louth, Armagh or Laois.

“Today was a good performance but we are going to need another 10 or 15 per cent.”

While McGourty finished Sunday’s game with 0-8 to his credit, with 0-6 coming from frees, he might have found the net with his second point from play. Moments after teeing up McGourty for a point which tied the game at 0-9 to 1-6, Paddy McBride delivered another inviting ball into the square.

McGourty timed his run to perfection, splitting the full-back and the goalkeeper to punch the ball towards goal. His connection was good but he didn’t count on Aidan Devaney producing cat-like reflexes to somehow redirect the ball over the crossbar.

“It was a world class save – I was only two yards out,” reflected McGourty. “There was a bit of miscommunication between the keeper and the full-back so I knew to get in front. It was on-target, I flicked it on but it was a great save. We still got a point from it and we won the match by a point. Every score counts.”

The St Gall’s ace also hailed the exploits of the younger members of the panel. With a host of regulars missing, Frank Fitzsimons and Gearoid Adams have given youth their chance in the early stages of the season.

On Sunday, Conor Hamill, Peter Healy, Paddy McAleer and Conor Small all impressed while Sean Pat Donnelly made a fine second half cameo appearance. “Different people are coming back and the squad is getting stronger,” added McGourty.

“Kevin Niblock didn’t play today neither did Marty Johnston, James Laverty, Kevin O’Boyle, Sean McVeigh – they are quality players for us. “Conor Small’s ball-winning ability is frightening. He didn’t get on the scoresheet but his workrate was outstanding.

“Paddy McAleer has improved immensely as a footballer over the last few years – I rate him very highly. “There are other guys on the panel like that too but it is about having the confidence to do it when your chance comes around.”

Louth represent an altogether different challenge for Antrim this Sunday. When the sides clashed in round seven of last year’s Division Four campaign, both counties had already booked their place in the league final. A draw was an inevitable outcome at Corrigan Park.

When they locked horns again at Croke Park last April, Louth emerged with a 3-12 to 1-14 win after an impressive second half performance. The wide open spaces of Croker seemed to suit the Wee County but the tight confines of their home at the Gaelic Grounds will make life very difficult for the Saffrons this weekend.