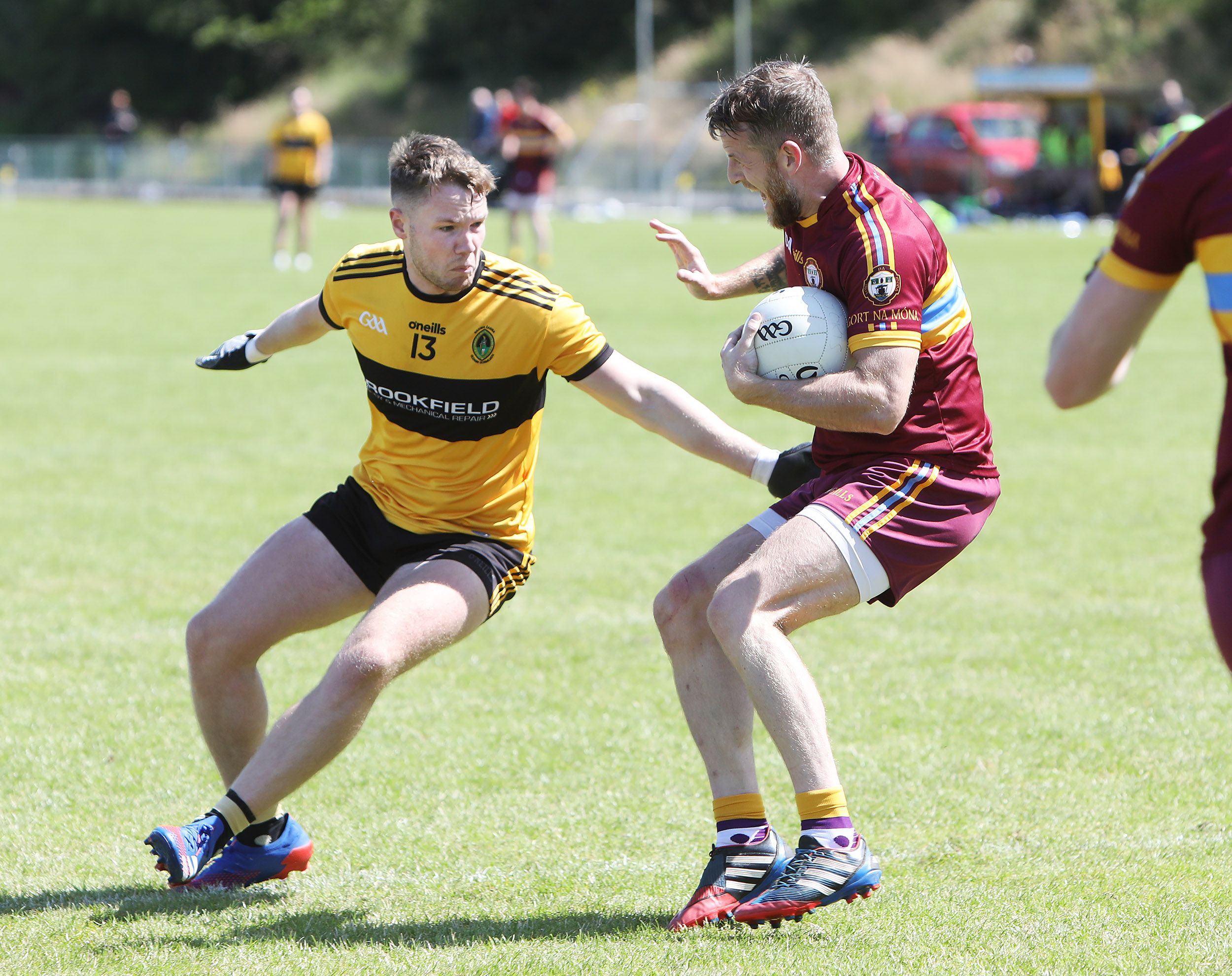 Gort na Móna game with Naomh Éanna has been cancelled due to a positive Covid-19 case in the Turf Lodge club. The match points will go to Naomh Éanna

The dynamic of Group 1 will change dramatically if Porglenone can finally get their Championship campaign off the mark when they host Ahoghill at Kelly Park.

Casement’s, who took Lámh Dhearg to two replays in last year’s campaign, have lost both games so far and need to avoid defeat to retain any hope of progressing from the group.

Ahoghill had three points to spare over their neighbours in the opening round and a win would see them through to the quarter-finals along with Creggan.

In that regard, this is a proper Championship test for both sides.

Portglenone ought to have learned plenty from their first meeting and have Antrim star Niall Delargy back in the fold and can keep their interest in the Championship alive with a narrow win.

LAST year’s county finalists Lámh Dhearg can book their place in the quarter-finals with a game to spare if they pick up a point at Corrigan Park while St John’s will be hoping to gain their first win.

The Whiterock Road men lost out to Lámh Dhearg in their Championship opener before a late Stephen Beatty equaliser denied them both points against Rossa.

The Red Hands then defeated Rossa last Sunday to take control of the group.

Crucially, a win would see the Hannahstown men top the group and, therefore, avoid a likely rematch with Group 3 leaders Cargin in the quarter-finals.

Ryan Murray picked up two yellows against Rossa while brother Conor and Ben Rice were also shown black cards so they’ll need to show better discipline against a St John’s side who will be hoping their dual stars all came through Sunday’s hurling clash against Rossa unscathed.

COUNTY champions Cargin had 19 points to spare when they met Aldergrove in the first round and, baring something spectacular, they’ll confirm their quarter-final spot against last year’s Intermediate champions.

Damian Cassidy is likely to give game time to his fringe players, although they only defeated St Brigid’s by three points in the last round and needed the aid of the McCann brothers, Michael and Tomás, to help them over the line.

Yet, Aldergrove suffered a 20-point mauling at the hands of Aghagallon in their last outing and it is hard to make a case for Paddy Nugent’s side in this one.

THIS game could turn out to be a decider to see who finishes runner-up behind Cargin in the Group 3 standings as things stand.

St Mary’s claimed the spoils when the sides met in the first round after Ronan McGrady thought he’d done enough to secure a point for St Brigid’s. A late 1-1 salvo, including a goal from Ruairi McCann, gave Aghagallon the win that gives them the edge over Eunan Conway’s men.

The hosts need to avoid defeat to manage any chance of progressing to the last eight and they will be hopeful that half-forward John Blaney has recovered from a groin strain to play some part.

The first game between these sides went down to the wire and another close battle is in store, but St Mary’s would slight favourites on recent performances.

This game has been cancelled following a positive Covid-19 case in the Gort na Móna club. As per rule, the points will go to Naomh Éanna.

GLENRAVEL have proven themselves to be the surprise package of the intermediate grade this season and stand on the cusp of making it through to the semi-finals.

A win over Dunloy at Pearse Park on Wednesday would give Con Magee’s a last four berth regardless of other result and they’ll be keen to seal the deal ahead of next week’s game against fellow Group 1 pacesetters Moneyglass.

That could be easier said than done as Dunloy will be keen to keep their fate in their own hands rather than rely on result elsewhere.

The Cuchullains face Glenavy in the final game and will confident of success so a share of the spoils might be suitable for both teams.

IT is perhaps a flaw of the current Championship format at the grade that both Sarsfield’s and Glenavy are already out of the running with only the top two in each group progressing.

By employing the same quarter-final format of the senior hurling Championship, such a dead-rubber scenario could be have been avoided – until the last round of games at least.

In any case , Sarsfield’s are likely to rest a number of their dual players as their attention will surely turn to the intermediate Championship.

Glenavy have been disappointing in the intermediate grade this year, but this represents a decent chance for them to get a win.

THANKS to their win over Glenavy, Davitt’s retain a slim chance of a top-two finish in Group 2, but they’ll need other results to go in their favour in the last two rounds.

Firstly, they’ll need to defeat Moneyglass at Davitt Park – a sizable challenge in its own right.

They’ll then need Glenravel to top the group and Dunloy not to make it to six points so they can take second place at the expense of Moneyglass on the head-to-head.

A lot will need to go right for Sean O’Neill’s side for that to happen and Moneyglass will still be fancied to claim an away win to move a step closer to the semis.

ST Paul’s are on the brink of the Antrim IFC semi-finals and need only a point from their final two Group 2 games to guarantee a top-two finish.

Paddy Linden and Séamus Ó Tuama will be hoping they can get the job done at the first attempt when they host Rasharkin on Wednesday night.

St Mary’s claimed a narrow one-point win over Lisburn in the last round to keep their slim hopes of a semi-final place alive.

However, the home side won’t want to leave things to chance ahead of their final group game against Ballymena and should prove too strong for Rasharkin.

ST Pat’s are yet to pick up a point from their Group 2 fixtures and it is hard to make a case for them as they host joint-leaders Ballymena at Kirkwoods Park.

All Saints, like St Paul’s, will progress to the last four if they pick up just a point from their remaining two games.

Lisburn have little but pride to play for at this stage and, although they are likely to compete well, Ballymena aren’t likely to slip up.

HAVING began as one of the fancied teams back down at intermediate level, St Teresa’s need a lot to go in their favour in order to progress and they must defeat Randalstown at Glen Road Heights to start.

Back-to-back defeats to St Paul’s to Ballymena followed their opening round win over Rasharkin.

St Teresa’s should have too much for Randalstown, but even a win may not be enough at this stage of the competition.

THINGS in Group 1 are finely posed heading into the final two rounds of games, but Pearse’s hold the edge over the other teams as they are the only unbeaten team in the group.

A win over St Agnes’ at the Cricky would see the North Belfast side through to the JFC semi-finals while the Aggies may need to defeat Ballycastle in their final game to have a chance of progressing.

However, Pearse’s impressed in their six-point defeat of St Malachy’s and a repeat of that performance would see them over the line.

AFTER suffering a shock defeat to Laochra Loch Lao in the second round, St Malachy’s then lost out to Pearse’s in the last round and their hopes of making the last four hang by a thread.

Seamus McKenna’s side will need to defeat Ballymena on Wednesday  night and hope other results go in their favour.

They might also need to hope Ballycastle can defeat St Agnes’ next week in order to pip the North Antrim side on a head-to-head.

ST Comgall’s proved no match for an in-form Ardoyne side in the last round, but they should return to winning ways against Éire Óg on Wednesday night.

The Antrim town outfit had 10 points to spare over O’Donnell’s in their opening game and should keep their semi-final prospects alive with a win.

IT would take a rather unusual set of results to deny Ardoyne a semi-final place at this stage of the junior football Championship.

The Kickhams will be assured of a place in the last four with a draw or a win in their final Group 2 game against O’Donnell’s on Wednesday night.

The North Belfast outfit have eased to wins over Éire Óg, Mitchel’s and St Comgall’s and they should make it four from four at MacRory Park.