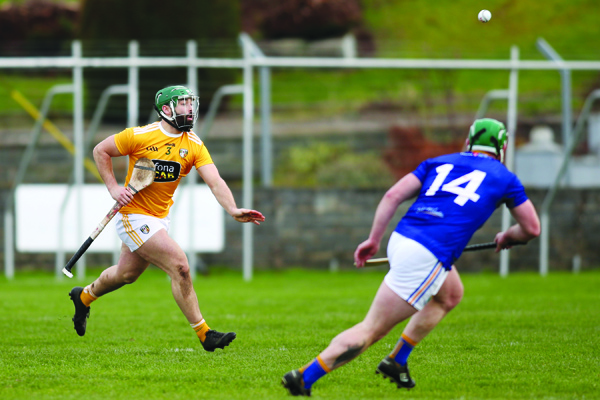 ANTRIM’S hurlers will be expected to make it two wins from two when they host Mayo at Loughgiel on Sunday (throw-in 2pm), but they take a significant step up in class for the following three league fixtures.

Arguably their toughest test comes with round three’s trip to Tullamore to face Offaly while the face Meath (home) and Kerry (away) in the last two rounds.

Gleeson, however, stressed that they will treating Mayo with the upmost respect this weekend and added that Antrim’s attacking options will be strengthened in the coming weeks as Conor McCann, Ciaran Clarke, Conal Cunning and Keelan Molloy return to fitness.

“Conor (McCann) is just back and Ciaran (Clarke) is really getting through is rehab well and we are expecting him back on the field this week. Conal Cunning and Keelan Molloy are still out, so we’ve options coming back,” added the Antrim boss.

“The guys that are there at the moment are working hard. There’ll be a few lads disappointed not to get out on the field today, but they’ll get their chance too.

“We’ll be treating them (Mayo) with respect and we’ll be training hard this week and we’ll be putting out a team that’s going to be really competitive. We are playing in our own home patch next week and whoever comes, we’ll be making it really difficult for them.

“I know when we go up to Loughgiel, there’s always a good surface up there. We are looking forward to it.

Last Sunday, hit eight unanswered points at the start of the second half to see off the challenge of a stubborn Wicklow outfit as they got their Allianz Hurling League Division 2A campaign off to a winning start in Arklow.

Neil McManus contributed more than half of his side’s tally, hitting 0-11 while five of his frees followed fouls on the lively James McNaughton.

“I would say workmanlike would be a fair assessment, but I don’t mind that as long as ‘work' is in it,” said Gleeson.

“We had to work hard for that game there today.

“We met Wicklow when they were only back training a week in the Kehoe Cup at Abbotstown and we knew we were going to get a different game today.

“I thought we fought hard for everything we got today and we got the points leaving Arklow, so I’m pleased with that.”

The Saffrons will, undoubtedly, face tougher tests in 2020, but they’ll be happy to be off to a winning start ahead of a home tie against Mayo in Loughgiel on Sunday.

Gleeson expressed his satisfaction with how his side reacted following a lacklustre first half performance against a determined Wicklow side.

“Wicklow aren’t a bad team. They came up from Division 2B last year for a reason,” stated Gleeson.

“They are here and they are competitive - you can see from the other result today between Meath and Offaly, there isn’t much in it and it is a competitive division. Any team who is going to get points will earn it.

“Wicklow had a bit of a roadblock up there with their two wing forwards dropping deep. We just had to stick to our shape and not let them dedicate how the game was going to be played. We just revisited what we were doing in training.

“We got on top for 16 or 17 minutes at the start of the second half and scored eight unanswered points - that was a good sign.

“Our boys have a good fitness base in this year as well which probably told on the heavy ground - we were able to stay going. So it’s positive, we’ve things to work on, but they’ll learn. If they learn from what happened in the first half, that’ll be us doing our job as a management team.”