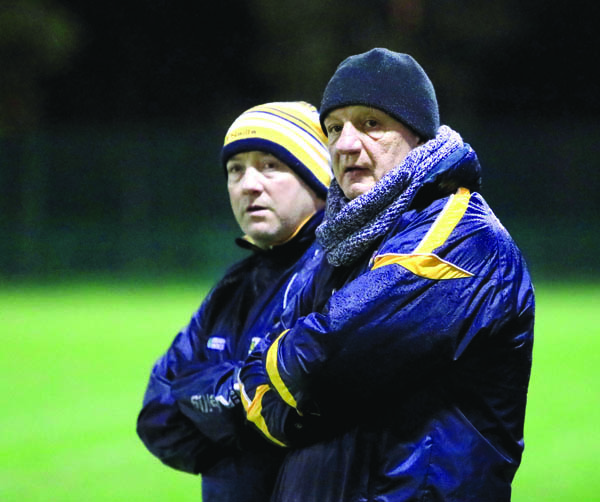 Antrim manager Terence ‘Sambo’ McNaughton, pictured along with selector Gary O’Kane during last Saturday night’s Conor McGurk Cup win over Down, has questioned logic behind the GAA’s decision to keep April as a ‘club only’ month when Antrim are set to play in the new Joe McDonagh Cup in May

ANTRIM hurling manager Terence ‘Sambo’ McNaughton has stated his opposition to the controversial new rule to mark April down as a ‘club only’ month.
The Saffrons begin their Championship season in the new second tier Joe McDonagh Cup on the first weekend in May.

McNaughton says the notion that county managers won’t have access to their players in the build-up to Championship games isn’t practical.
Indeed, several football managers, including Mayo boss Stephen Rochford and Donegal manager Declan Bonnar, have also stated their intention to ignore the ruling.

The penalty for breaching the rule is forfeiting home advantage for the county’s next league game, so teams won’t be punished until early in 2019.
“Some genius decided to give the clubs April – our Championship is set to start on the first weekend in May,” said McNaughton.

“There has to be a discussion about that.
“Anybody who knows anything about hurling knows we are going to need the players in April to prepare for the Championship.

“It all comes very quick this year. Now, clubs in Antrim will have their players in July, August, September right through.
“There is no problem there. Even if Antrim are successful, our season is over in July.
“That ‘for the clubs thing’ is designed for the Kilkennys and Tipperarys of this world, not Antrim, Down or Meath. We aren’t going to be playing in the All-Ireland final in August.”

McNaughton was speaking after watching his side secure their first piece of silverware with a comprehensive 18-point win over Down in the Conor McGurk Cup final at The Dub on Saturday night.

Second half goals from Conor McCann and Maol Connolly helped Antrim pull clear in a dominant second half performance.
Down’s Declan McManus and Antrim’s Nigel Elliott had traded goals in an evenly-contested first half with the Saffrons leading by just three at the break and McNaughton revealed he had some choice words for his players at half-time.

“Antrim and Down games are always like that,” reflected McNaughton.
“Down will always judge themselves against us and that’s the way it has been and will always be.

“They would be happy getting one over on us in anything. Down will rise for us when they won’t rise for anyone else.
“Because we have been so dominant over the last few years, it was maybe hard for us to get up for it so the boys got a bit of a bollocking at half-time.

Antrim’s next competitive outing is a daunting one as they take on defending All-Ireland champions Galway in Pearse Stadium on Sunday, January 28 in their National Hurling League Division 1B opener.

The game will be played as a double-header with Galway’s NFL Division One clash with Ulster champions Tyrone, ensuring there will be a bumper crowd at the Salthill venue.
Before that, Antrim will trim their squad for the forthcoming league and Championship campaigns with McNaughton insisting that the door will remain open for returning players.

“We are training flat out and we will try and prepare as best we can and get a system and a team built up for Galway,” added the Antrim boss.

“There are always boys coming and going from the panel. Once you start picking teams, you start getting the problems. Boys start asking why they aren’t starting – people have to serve their apprenticeship and have to get game time. People have to build up their fitness before they can get back in.

“The likes of Eoghan Campbell has been forgotten about, but he is ready to come back to training an, hopefully, he’ll make an appearance during the league.
“Matthew Donnelly is getting some game time and is slowly getting fitter and faster. Conor Carson is the same and you have Simon McCrory still to come back.
“There are a few boys you would hope could make a difference.

“It is always a work in progress with Antrim, but we are in a good place and we have a group of young players who want to play hurling for Antrim and that’s always a good thing.
“We are heading in the right direction – we aren’t going to set the world alight, but we are going to compete.”