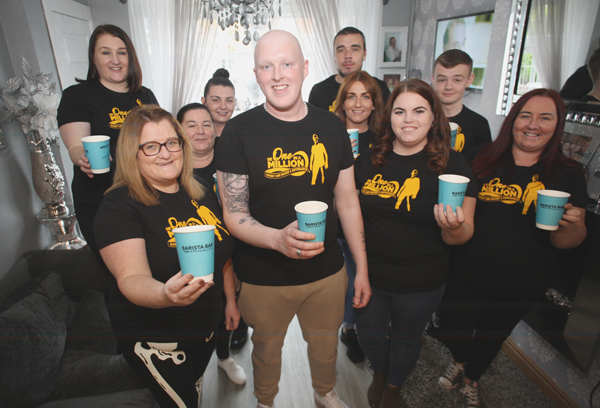 TOGETHER: Joining Ryan Braniff for the coffee morning during Bone Cancer Awareness Week

AN inspirational Ardoyne man, who is battling a rare form of incurable bone cancer, has raised over £1,000 to fund research into the disease.
24-year-old Ryan Braniff was diagnosed with Ewing’s Sarcoma in January after suffering with leg pains for a number of months.
“My legs started to swell out, but I thought it was because I was working – I’m a chef so I was standing on my feet all day,” Ryan explained.
“I went to the hospital because the pain was that bad. I was sent to Musgrave for a biopsy. At first they told me I had cracked a femur and my muscle had been torn off the bone, but after the biopsy they told me it was Ewing’s Sarcoma.
“I’m feeling positive. Chemo was hard at the start, but you get through it.”
Ryan has undergone month’s of chemotherapy and is preparing for surgery next month where his femur and hip will be replaced.
To mark Bone Cancer Awareness Week, Ryan and family held a coffee morning on Friday and raised over £1,000 for Bone Cancer Research.
Ryan is the only person in the North with Ewing’s Sarcoma and the disease affects just 30 people in the UK.
Despite his own battle, Ryan said that he was determined to help others suffering from Ewing’s Sarcoma.
“I wanted to raise money for research to help everybody else,” he said.
“I don’t want people going through what I’m going through. There is no cure for Ewing’s and it can’t be detected in the blood. They need to find a cure, so I want to raise money for it.
“It’s bone cancer week so I decided I would host this to raise awareness. It costs £200 a day to train a doctor in bone cancer treatment.”
He added: “It’s crazy how much money people have given us. People have been in and out all morning – the support has been amazing.”
Food for the coffee morning was donated by 26 West, where Ryan works as a chef, while tea and coffee were donated by local social enterprise R-City. All food that was not used on the day went to feed the homeless at Door of Mercy Soup Kitchen.