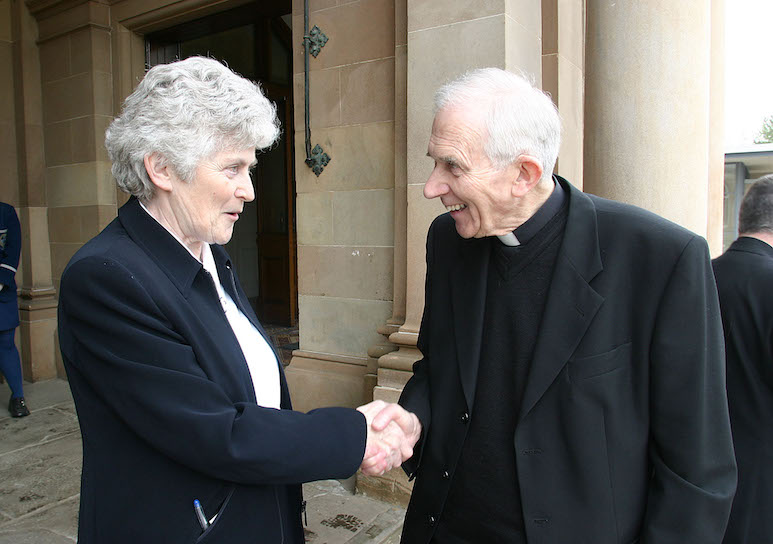 FLASHBACK: The principal of Rathmore Sr Ursula Canavan welcomes Bishop Patrick Walsh to the school for the rededication of the convent chapel at the grammar school.

CATHOLIC grammar schools across Belfast have confirmed they will use academic selection for their 2021-22 pupil intake — despite repeated statements from Catholic bishops who say the system fails working class children.

In a joint statement today, the schools' boards of governors said academic selection is “a key component of the admissions criteria”.

While the state-governed 11-Plus transfer test was scrapped in the North in 2008, exams for academic selection are provided locally by the Association for Quality Education and the Post-Primary Transfer Consortium.

In 2012, the Catholic Bishops in the North issued a joint statement calling for an alternative to academic selection. They said: "Transfer to post-primary education by academic selection...is failing our young people and their parents. It can seriously distort the focus of learning and teaching for children in Primary Six and Seven. It artificially divides children into two distinct school groups, even though all schools must offer their pupils access to the same curriculum entitlement. It does not do justice to the way in which the skills and abilities of children develop at this critical stage of their lives. Further, it has a disproportionate and unacceptable impact on the educational opportunities of the most socially disadvantaged. As Catholic educators our outreach to these children and young people is particularly important."

However, that plea fell on deaf ears as most of the Catholic grammars in Belfast turned a deaf ear the bishops — even though the Bishop of Down and Connor is nominally responsible for all the Catholic schools in the city.

The privately commissioned tests, originally scheduled for autumn, have been delayed by just two weeks due the Covid-19 pandemic.

Schools in Enniskillen, Newry, Kilkeel and Derry said had cancelled the exams for one year due to the disruption caused by school closures.

However, grammar schools including St. Mary’s CBS, St. Dominic’s, Rathmore, St. Malachy’s, Aquinas, and Dominican College, have insisted selection will go ahead for the 2021 intake of pupils.

Governors of the schools said they “are mindful of the unprecedented circumstances facing all of our young people” adding that they wanted to provide “certainty and reassurance” for parents and pupils.

They said they welcomed “the mitigating measures being taken by the Post Primary Transfer Consortium to make the GL Assessment papers as accessible as possible for pupils".

“We also welcome that additional time will be afforded this year to the pupils to complete each of the two papers,” the statement said.

St Malachy's College said it “will continue to use the GL Entrance Assessment method” as “academic selection is, and remains, a key component of its admissions criteria.”

The decision to delay rather than cancel this year’s transfer tests is the subject of a legal challenge by a Belfast mother, whose 10-year-old daughter attends an Irish medium primary school.

She told the Andersonstown News that the decision to hold the exams were causing “unnecessary stress” for children.

“I don’t believe that there are no other viable options out there,” she said.

“I believe that children need to be put at the heart of every decision made, and I don’t think that has happened.

“Our children’s mental wellbeing and equal educational opportunities should be paramount.”