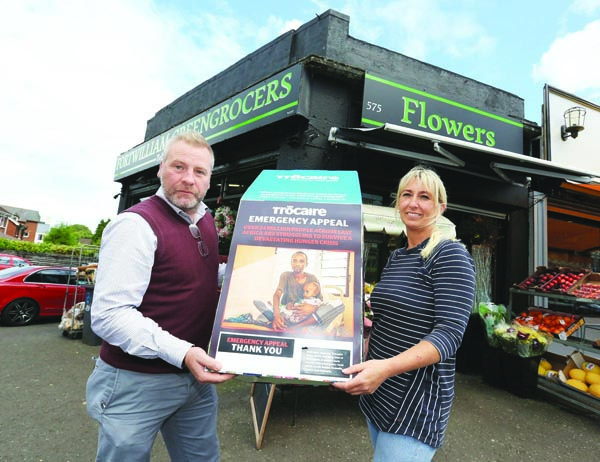 APPEAL: David O'Hare from Trócaire and Kelly O'Hare at Fortwilliam Greengrocers whose customers contributed to the charity's East Africa appeal

OVERSEAS development charity Trócaire has praised the generosity of people in Belfast for their response to the hunger crisis in east Africa.

Kevin Donnelly said they have been overwhelmed by the response after the charity accepted a donation from North Belfast business Fortwilliam Greengrocers who held a fundraising campaign over the last six months.

“On behalf of Trócaire I would like to thank the people of Belfast for their ongoing support of our East Africa Hunger Crisis Appeal,” said Kevin.

“We are delighted with the response of people to our call for donations. I would also like to thank parishioners in parishes right across Belfast for their support of the national church collection held on July 22 and 23 which was called by the Bishops of Ireland.

“The people of Belfast have shown time and again that they have an amazing affinity for, and solidarity with, people in the developing world who are facing crisis. Governments of the world could do worse than follow this example as the response of the international community to this disaster has just not been good enough.”

Shoppers at Fortwilliam Greengrocers were among the businesses to get behind the appeal over the past number of weeks and owner Kelly O’Hare presented Trócaire’s with £600 raised for their work in the region.

“The situation in East Africa is heart-breaking and we felt we had to do something,” said Kelly.

“We put a bucket on the counter and people were just brilliant with their donations. My dad Sean was good friends for many years with Gerry O’Hare (no relation) who set up the Trócaire office in Belfast so that was the obvious place to donate the money as we know it will be used effectively to help those in most need.”

Kevin said the situation in east Africa was deteriorating.

“East Africa stands on the brink of catastrophe with almost 25 million people at risk of starvation. The support Trócaire has received from people across Belfast will enable us to provide emergency food, water and medical care to people across Somalia, South Sudan, Ethiopia and Kenya.

“Our health centres and feeding programmes are saving lives but the needs in the region are enormous. The generosity of people here at home will allow us to reach even more people with life-saving aid. I would encourage readers to visit our website – trocaire.org – or follow us on social media for information about how their support is helping us save lives in east Africa,” he said.