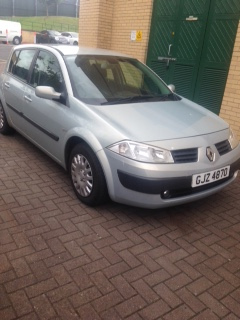 Picture of the silver Renault Megane used by the killers

The detective investigating the murder of UDA man John ‘Bonzer’ Boreland has again appealed for witnesses to the killing to come forward, a week after the loyalist hard man was gunned down.

Boreland, 46, was murdered last Sunday evening (August 7) outside his flat on Sunningdale Gardens in the Ballysillan area of north Belfast.

The father of three was heavily involved in criminality and had been warned his life was under threat.

He was aligned with a dissident grouping of the UDA and speculation as to who carried out the murder has centred on mainstream elements of the organisation.

Detective Chief Inspector Justyn Galloway said they were looking for anyone who saw a silver Renault Megane used by the killers around the time of the shooting.

“We believe the silver Megane travelled along Sunningdale Gardens towards Ballysillan Road,” he said. “We are appealing to anyone who saw this silver car last Sunday night and between last Sunday and Tuesday when it was recovered partially burnt out.

“We also want to hear from anyone who saw the car over recent days and weeks – who was in it, where it was being driven or parked. This is a key line of enquiry at this stage in the investigation.

“We are also still interested in the movements of a black Peugeot 307 car which was travelling along Sunningdale Gardens in the direction of Sunningdale Park.

“We want to speak to anyone who may have seen this car in the Ballysillan area and are very keen to trace the driver of this vehicle so they can be eliminated from the enquiry.

“We are also keen to speak to anyone who was in the Sunningdale Gardens area around 9.50pm last Sunday who saw or heard the shooting or anything suspicious.

“We have made one arrest and conducted a number of searches of properties and locations. Regrettably, the shotgun used in the murder has not been recovered.

“Police are following a number of lines of enquiry in relation to this murder. Tensions within loyalist paramilitarism and criminality remain active lines of enquiry but they are not the only ones.

Anyone with information is asked to contact detectives at Musgrave police station on the non-emergency number 101. Alternatively, people can use the independent charity Crimestoppers on 0800 555 111 and provide information without giving their details.