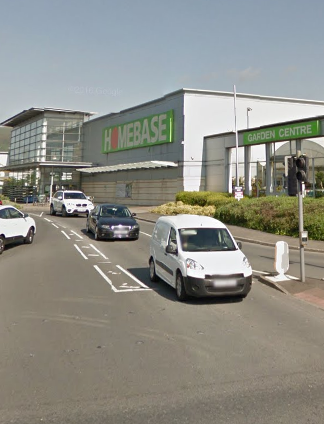 Homebase at Shane Retail Park on the Boucher Road

A SOUTH Belfast woman is appealing to the public to help her recover a precious memento of her late mother after her purse and mobile phone were stolen at a local shopping centre.

Yvette McCrudden from Finaghy was outside Homebase at Shane Retail Park on the Boucher Road on Saturday, September 17 when the possessions were taken.

“My husband and I were going to Homebase at Shane Retail Park,” she told the South Belfast News. “We got a trolley and walked up to front door of the shop. I had put my phone and the purse inside the trolley. We had stopped at the entrance to the front door to see items that were on display.

“I was literally looking at the items for now more than 10 to 20 seconds and I turned around in a state of blind panic to see my phone and purse was no longer there.”

Yvette’s iPhone 5s in a pink cover and her Burberry purse were stolen during the robbery. She lost a number of items including cash and bank cards, but it’s a treasured reminder of her mother Elizabeth which she desperately wants back.

“The most important thing that’s missing is my late mother’s work pass from when she worked in the Royal Victoria Hospital for many years. She had Alzheimer’s and we nursed her through that, so this personal possession of hers is irreplaceable. I have plenty of photos of her but her work pass in particular means a lot to me. I don’t care about any of the other items, they can be replaced, but I can’t replace the work pass.

“I would appeal to anyone who was in Shane Retail Park on Boucher Road around lunchtime on that Saturday or even anyone who was inside the Homebase store who may seen anything. I have searched all around the area and asked in nearby shops but nothing has been found yet. I also approached the landlord of Shane Retail Park but unfortunately their cameras are blocked by a tree. I reported it to the police too. I’ve tried everything. I think the important thing is the sentimentality. It would mean everything to me to get it back.

“I would ask them to leave it somewhere, in Homebase or with the police if they find it. I would also offer a reward for any help in locating the pass.”