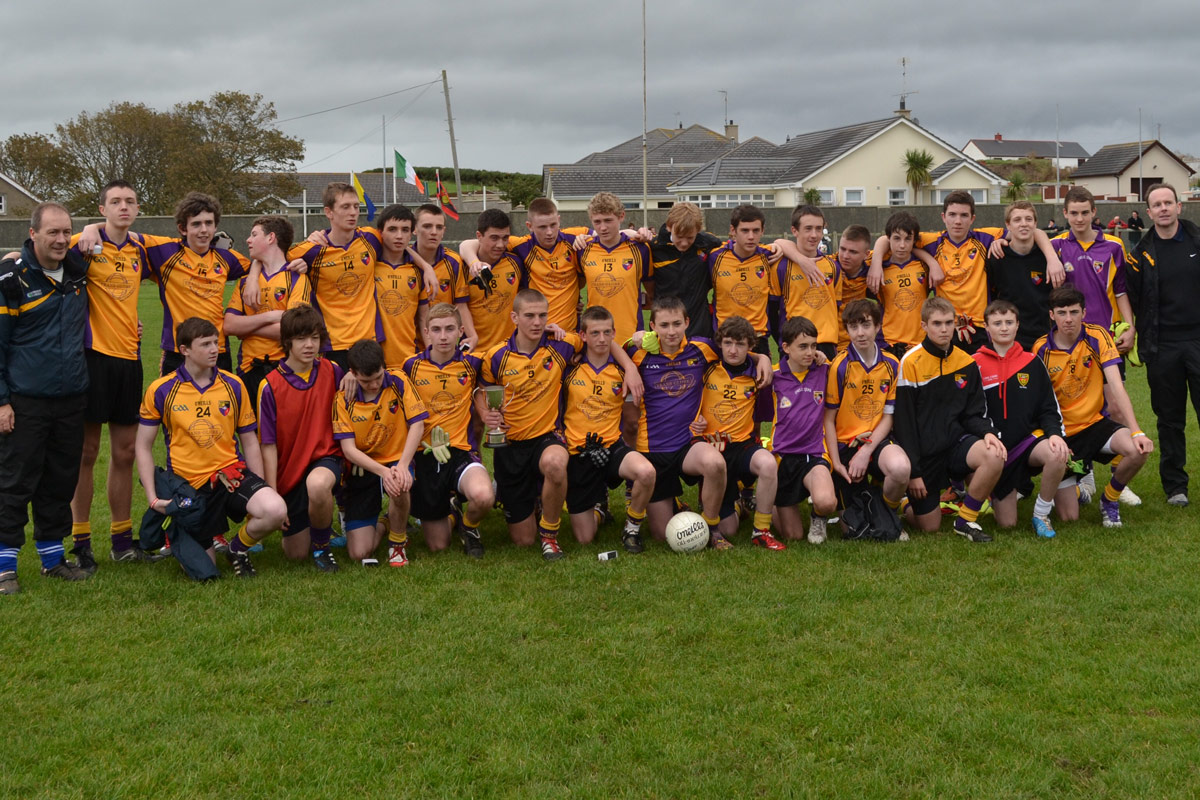 East Down U16 Championship final

Carryduff clinched the East Down U16 Championship title following a highly entertaining game against Saul.

Saul pressed into attack early on but Conor McMenamin’s missed free in the first minute allowed Carryduff to compose themselves.

Ryan McKee’s point was followed by an excellent save by Carryduff keeper Mark Hynes who turned the ball around the post for a 45m free.

McMenamin was unlucky for Saul in the sixth minute when his effort glanced off the post. Ciaran Hynes kicked wide before Sean McGonigle and Donal McKeever pointed for Carryduff.

McMenamin was again off target for Saul but Hynes pointed well for Carryduff.

Keeper Hynes was there again to come to Carryduff’s rescue in the 18th minute with a second fine save and Ciaran Hynes added a point, from a volley shot.

A goal-mouth scramble in the 26th minute saw the ball finish to the Saul net and Downpatrick referee Marty Davey had no hesitation awarding the goal.

Saul rallied to claim points from Burns and a sublime sideline free-kick from McMenamin.

Having played well into the breeze in the first half, Carryduff should have seized the initiative but it was Saul who opened impressively with points from McMenamin and Murray.

Carryduff, however, reasserted and points from McKeever and McConnell steadied the ship.

Murray converted a free for Saul in the 32nd minute as the tempo of the game increased.

Ryan McKee added a further point and Murray converted a free for Saul as the the crowd was treated to some great football.

Carryduff kicked a number of wides before Niall McGoran pointed. McKee missed another chance while Saul mounted a counter-attack that saw wing back Curran clear from the Carryduff goal-line.

Joshua Murray and Michael Rice added points for Saul, Murray converted a free and substitute Jonathan Adie added a point as McKee added a further score for Carryduff to leave Saul within four points of Carryduff with four minutes of normal time remaining.

However, McGoran added a further point for Carryduff and as the ball was cleared from a scramble in the Saul goalmouth, Carryduff were awarded a 45 metre free, which Sean McGonigle duly converted to ensure the title came to Carryduff.

Although Carryduff got off to a promising start, with points from Ronan Beatty and Shea Reilly in the second and fourth minutes, Shamrocks’ fifth minute goal from Joshua Durnin set out their intentions.

A moment later Matthew McSorley goaled for Carryduff but Shamrocks replied with a seventh minute point from the inspirational BJ McCourt.

Blaine Tumilty’s eighth minute goal for Shamrocks was quickly followed by  a point from Conor McKeown to put three points between the teams.

Beatty added a point from a free  for Carryduff to reduce the deficit to two.

Shamrocks’ three points in the 13th, 14th and 15th minutes, the result of some superb high-fielding as Carryduff struggled to clear the ball from their own defence, proved crucial as Shamrocks gained a grip on the game.

That grip was enhanced when Carryduff midfielder Michael Woods had to leave the field as a consequence of a knee injury and was replaced by Ciaran Hynes.

Ronan Beatty’s 17th minute goal, after Reilly had cleverly supplied him, gave Carryduff supporters something to cheer about, reducing the deficit again to two points.

However, it was as if this only gave added incentive to Shamrocks. Joshua Durnin added a third goal followed almost immediately by a point from Shane Hanna.

Shea Harper’s shot on goal ricocheted off the crossbar for a point for Carryduff but Shamrocks saw the half out with points from Hanna and Durnin to leave the half-time score Carryduff 2-05 Shamrocks 4-08.

With 12 points between the teams Shamrocks showed no sign of letting up. Despite Carryduff registering two points (Reilly and Turkington), Tumilty added a further two points for Shamrocks followed by two further points from McCourt and Hanna.

Durnin’s goal in the 51st minute left the gap too much for Carryduff to breach.

Shamrocks clinically added further points from Durnin, Power and McKeown with a further goal from substitute Sean McAleavey who also added a final minute point. Points from Reilly and Beatty completed the scoring.